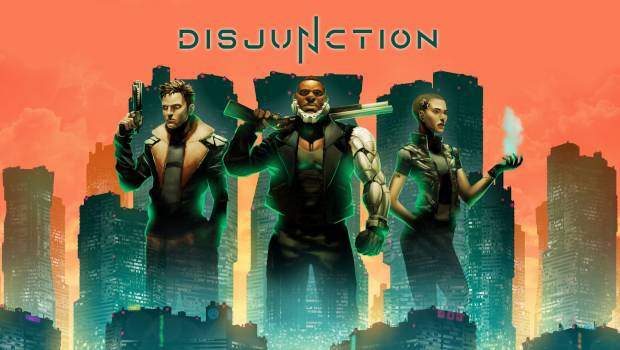 Disjunction Review – Cyber without the punk

When Disjunction was sent to me last week it was described to me as Hotline Miami in a cyperpunk world. I was all like “hell yeah, sign me up!” because I absolutely love the rhythm and flow of Hotline Miami. Unfortunately Disjunction never really gets to those heights, however there are some interesting things at play here even though the game ultimately didn’t get with me, but let’s explore more of that in the review.

Disjunction is a top-down stealth action game that takes place in the year 2048. The world is crumbling from a massive economic downturn, climate change has caused scarcity of previous resources, and society is at an all time low.

Sounds a little too familiar, doesn’t it?

The game takes place in the United States that has seen massive unemployment, and homelessness has created a series of shanty towns where communities are looking out for one another. Of course, being a cyberpunk game there’s a bunch of nanomachines and biotech, and there’s the typical political activists pushing back against augmentation, and the military is taking over the government in various ways. Disjunction is not really pushing the envelope when it comes to typical cyberpunk fair. If you have watched Blade Runner, read Neuromancer, or played Deus Ex: Human Revolution, you kinda know what to expect. But I will go out there and praise Ape Tribe Games for just how in-depth the world of Disjunction is. Taking the internal wiki system that has been popping up in games since Pyre, the world of Disjunction is truly brought to life as exposition is cut out almost entirely, leaving the onus on the player to explore the origins of gangs, community members, or events form the past if they wish to do so. I love when games do this, and I was pleasantly surprised by just how much depth the developers were able to provide. So yeah, while it’s not groundbreaking, it feels grounded, and that was so great to explore.

Disjunction features three playable characters, all on different paths that quickly bring them together as they unravel a plot that involves shadowy figures, political activists, and gang warfare. Frank is a disgruntled cop turned PI who is pulling at the threads of the city’s drug supply, while Joe is a boxer who is out to revenge the death of his daughter, an activist in the fight against augmentation. Then you have Spider, who of course is a hacker for hire, brought into the fray reluctantly after a family member is assassinated. Working together they are on a quest to find out who is causing this chaos in their corner of the world. Once again it’s nothing new, but it’s intriguing enough that I was well and truly on board for the ride.

Yet playing the game, that’s where Disjunction fell apart for me. Each level has one of the aforementioned characters infiltrating a location, usually to collect some kind of evidence, or to find a target and have a chat to progress the story. The mission design never really grows from here. You sneak your way through these corridors and rooms, either stealthily knocking out your foes and dragging their bodies into a corner, or nosily taking them out guns blazing, but more often than not, that will end in death and failure.

Sneaking is always the better option, at least from my experience. While in sneaking mode you can see the vision cones of the patrolling guards and security bots. It’s a simple chore of avoiding their gaze, knocking them out, and hiding their bodies in a dark corner. Find yourself a keycard to unlock a door, continue on to the next floor, rinse and repeat until the mission is over.

The baseline idea here is actually quite good. Being able to hide in the shadows, drag bodies away, and using a series of abilities at the cost of energy is quite a lot of fun. However the formula is displayed in the first hour of the game, and never really changes in a meaningful way. This is also accentuated by the fact the a lot of the environments and tile sets are just reused. I was super excited when I made it to the Penthouse for instance. It’s use of color and decoration, and the pink clouds on the exterior really captured my imagination, and gave my interest levels a much needed bump when I made it there, but then just a few missions later I was apparently entering an underground nightclub frequented by gangsters and it used the exact same tile set. This didn’t look like a club. It didn’t feel like a club. It actually just felt like a big disappointment.

Each of the characters have their own sets of talents and upgrades, which can be reset and redistributed at the start of a mission which is a cool idea, but the upgrades are slight, do I don’t really know why anyone would want to do that. But still, I appreciated that I never had to worry about speccing in the wrong direction.

A lot the abilities between characters are extremely similar. Each has a grenade for instance, and some kind of attack that will stun. However I do have to say that Frank and Spider are by far easier to survive with than Joe, thanks to Spider’s cloaking ability, and Frank’s healing ability. Joe just doesn’t feel strong enough. I was constantly finding myself dying as Joe. It just felt really unbalanced because the missions I was playing with the other characters were just a breeze by comparison.

The number one issue that I have with Disjunction is its brutal lack of checkpoints. There were so many times, SO many times where I had made it through a very dangerous floor with just a small amount of health, moved on to the next floor, and died immediately which left me starting again from the extremely harsh floor I just made it through. It was infuriating, because sometimes it seemed to checkpoint you when starting a new floor, other times it wouldn’t, and the dedicated checkpoint “squares’ seemed to be few and far between. The frustration levels were rising, the gameplay and character weren’t growing, and my interest in completing Disjunction was definitely waning. 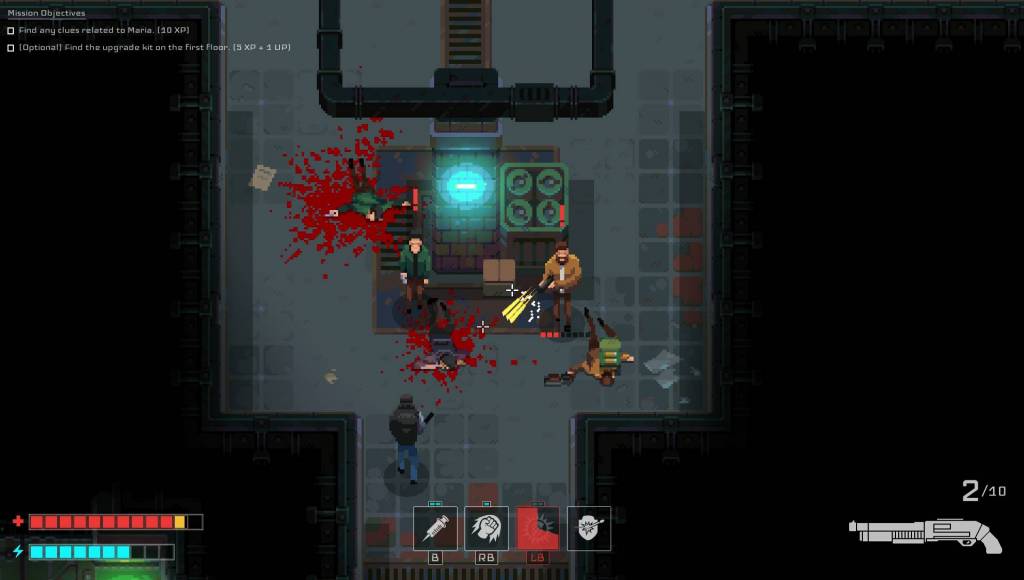 But then an interesting dialogue would happen, where I would have to make a choice. Did I let the Russian mobster go after I got the information? Or was I to kill him? Did I turn a target into the cops, or tell them to leave town and never set foot within its borders again? I have no idea if these moments actually affected my story in a meaningful way down the line, but once again, it was that niggling intrigue that got me through my frustrations.

Intrigue was one thing that carried me, but the other was the love of the soundtrack and visuals. That soundtrack, it sounds like the b-sides to Blade Runner 2049, which goes a LONG way to sell the mood. Look at that golden light. Those pink clouds. Unlike Cyberpunk 2077 that’s selling us the industrial 90s version of dystopia, Disjunction does a better job at selling that uneasy, alien world version, and it’s just… so good!

That’s where I sat for the rest of my time with the game. Disjunction lays a really great foundation, and builds out a world that I really want to explore, unravel, and just drink in. Yet it never really grows from that foundation. It never really throws anything new at you. That added to my already existing frustrations, because I wanted to like Disjunction way more than I actually did, and it had all the right ingredients to be a game that I absolutely loved, but it just never came together in the way I personally needed it to.

And that’s not say that Disjunction is a bad game, it’s just not a great game. As a debut from a team of just three people, Disjunction does so much right, and offers up way more narrative than anyone should expect from a team this size. The gameplay it does it have can be frustrating at times, but it’s solid. There’s a good foundation here. They just need to expand on it.

Summary: Disjunction has all the right ingredients, but it just fails to really do anything interesting with them.