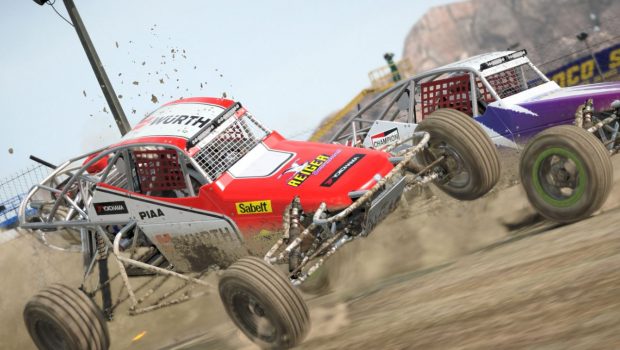 SYDNEY, 27th JANUARY 2017 – Codemasters & Bandai Namco Entertainment today announced that DiRT® 4™ will fearlessly race to the PlayStation® 4 computer entertainment system, Xbox One and Windows PC in June 2017. Hot on the heels of 2016’s critically and commercially successful DiRT Rally®, DiRT 4 takes the passion and authenticity of off-road racing to the next level, whilst also reintroducing gamers to white knuckle truck and buggy racing in Landrush. You can watch the announcement trailer now at http://www.dirt4game.com.

DiRT 4 will feature a game changing system called Your Stage; an innovative rally route creation tool that allows you to produce a near infinite number of unique stages at the touch of a button. You choose your location and set the route parameters then Your Stage does the hard work to create a unique rally stage that you can race, share with your friends and then challenge them to beat your time. Your Stage allows experienced rally players to create longer, more technical routes, whilst newcomers can create simpler shorter routes as they hone their skills.

Globally renowned for delivering premium quality, authentic and fun racing games, Codemasters is once more bringing its talent and experience to the world of off-road driving. With DiRT 4, the team have sought to combine the levels of thrill and realism from last year’s DiRT Rally with the fearless excitement, accessibility and adrenalin-fuelled contests previously seen in its critically acclaimed prequels DiRT 2 and DiRT 3.

Featuring classic rally racing that continues to build on the foundations set by the Colin McRae Rally games, the bruising contests from the official FIA World Rallycross Championship, the crazy battles of racing trucks and buggies, and the outrageous fun of open events in Joyride, players will face the challenges from as far apart as Australia, Spain and California in a truly global sport.

DiRT 4 challenges you to “Be Fearless” by capturing the thrill, emotion and passion of off-road racing. It recreates the heady mix of adrenalin and fear that comes from powering around a blind bend and the rush you feel going for a last ditch overtake when there’s not enough room on the final lap of a race. Off-road racing is about more than perfect cornering, it’s about heart-pounding split section decision making where bravery brings reward.