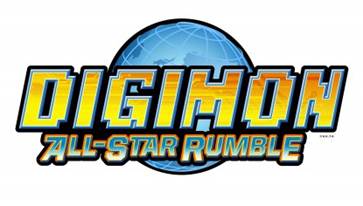 In DIGIMON All-Star Rumble the Digital World enjoys a time of restored peace after overcoming numerous wars and crises. However, Digimon must battle to Digivolve, so the restless Digimon propose to hold their first ever “Digimon Evolution Tournament” to determine who is the strongest of them all. In the vivaciously competitive tournament, up to four players will be able to select from a roster of 12 popular base Digimon characters and play as a total of 32 Digimon forms pulled from every Digimon series ranging from Digimon Adventure to Digimon Fusion. Players control these digital monsters and battle for supremacy in the main Versus Battle mode that players of all skill levels will be able to pick up and enjoy.

By powering up in battle, players can Digivolve into a much more powerful form, creating a unique combat atmosphere where players must balance attacking and simultaneously attempt to Digivolve and gain the upper hand. Utilizing special techniques during matches such as activating a Digimon’s “Evolution” power-up along with employing an aggressive attack or defensive strategy will provide colorful and exciting party-arena gameplay so that Digimon fans of all ages can face-off against rivals and become a true Digimon hero!

“For more than 15 years now, the DIGIMON brand has been growing up all over the world along with its incredibly passionate fan base. Thanks to DIGIMON All-Star Rumble, we look forward to delivering a battle arena experience that DIGIMON fans are waiting for!”  Herve Hoerdt, Vice President of IP Strategy, Marketing & PR at BANDAI NAMCO Games Europe.

DIGIMON FUSION is a new range of Toys that will be available in toy stores this September. The toy range follows the release of the DIGIMON FUSION TV series that is currently airing on Channel GO weekdays at 8.00am.

DIGIMON All-Star Rumble is scheduled for release in Australia and New Zealand on the PlayStation®3 system and Xbox 360 in fall 2014. For more information on BANDAI NAMCO Games Europe game titles and products, please visit www.BandaiNamcoGames.com.