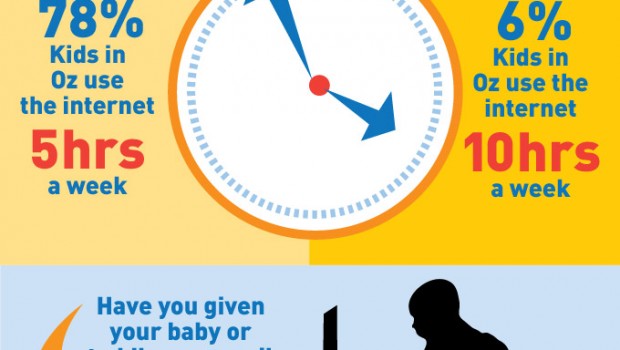 Major moments in a child’s life, such as the first time they ride a bike, appear to be increasingly superceded by digital coming-of-age capabilities like operating a smartphone or opening a web browser. This digital immersion is charted in the latest Digital Diaries study by AVG Technologies.

More than 6,000 mothers, across 10 countries including Australia, responded to the research about how their children use the Internet and smart devices. The research revealed that by the age of 3-5, more children globally are able play a computer game (66 percent) or navigate a smartphone (47 percent overall and 65 percent in Australia) than tie their shoes (14 percent) or write their own name (38 percent).

Dr Chris Brauer, Director of Innovation in the Institute of Management Studies at Goldsmiths, University of London, said: “This research shows us that knowing how to use digital devices is almost a birthright now. The challenge parents and society face, augmented by security and privacy technologies, is where this goes next. It’s similar when teaching a child to read. Learning to read is the first challenge but it is what you do with that skill that determines its value and risks.

“Like it or not, parents have a huge responsibility to educate their children in responsible and productive use of digital technologies. This research highlights the privacy and security considerations for interconnected homes but also the need to promote balanced lifestyles and that digital literacy is as much about use as access.”

Some key findings from the research include:

Despite the ongoing public debate around online privacy, more parents than ever are gifting their children with a digital footprint before they can walk, talk or are even born.

Over four fifths (81 percent) of the mothers questioned upload photos of their children – with the majority of photos put online before a child’s first birthday (62 percent) and almost a third (30 percent) during the prenatal stage.

‘Sharenting’, where parents publicly share their children’s progress online, was mainly for friends and family (80 percent).

With children increasingly immersed in the digital world from birth, the study highlighted the growing dominance of technology-related life skills over more traditional or practical skills.

A testament to the rising role of mobile devices in our children’s lives, 57 percent can also operate at least one app on a smartphone or tablet – an increase of 38 percent since the same question was asked two years ago*.

By the age of 6-9, the Internet appears to have become deeply ingrained in our children’s social lives, eliciting mixed responses from parents.

Of the 89 percent of this age group globally who are using the Internet, almost half (46 percent) are playing in a kid’s virtual world such as Webkinz™ or Club Penguin™; and almost one fifth (16 percent) are using Facebook, despite the legal age for an account being 13.

In Australia, however, the figures differ dramatically – 96 percent are connected but only 6 percent are using Facebook.

Mothers are largely neutral in their assessment of whether online time helps or hinders their child’s social skills (56 percent in Australia vs 46 overall believe it makes no difference).

In Australia 95 percent of the respondents believe their child had not been teased online – significantly higher than the overall 89 percent – but 13 percent (vs 16 percent overall) said they knew of children in their child’s peer group who had experienced aggressive or unpleasant online behaviour.

On par with their international counterparts, 78 percent of kids in Australia use the Internet for fewer than 5 hours a week; and 6 percent use it over 10 hours per week.

Parenting – Implications of Raising a Family in a Connected World

A significantly lower proportion of respondents in Australia (57 vs 63 percent) use parental controls on the PCs, laptops and tablets used by their children aged 6-9 years. And 11 vs 6 percent had no knowledge of the existence of these controls.

Michael McKinnon, Security Advisor at AVG Technologies AU, said: “Introduced to this world with a fanfare of social media activity and, by the age of a few months, pacified with a device, our children are learning about life through a screen. But how often are parents taking the time to consider the short and long term implications of raising a family in this connected world? Already there are indications of unpleasant behaviour that can lead to cyber bullying at this young age, even within controlled kids’ environments, and an unsupervised step-up to a much more open network like Facebook is massive.

“Parents can’t afford to become complacent as children of this age are not emotionally equipped to handle all online experiences. Parents providing them access to connected devices – that includes phones, tablets, game consoles and anything else that connects to the Internet – must take responsibility for their safety and privacy.”