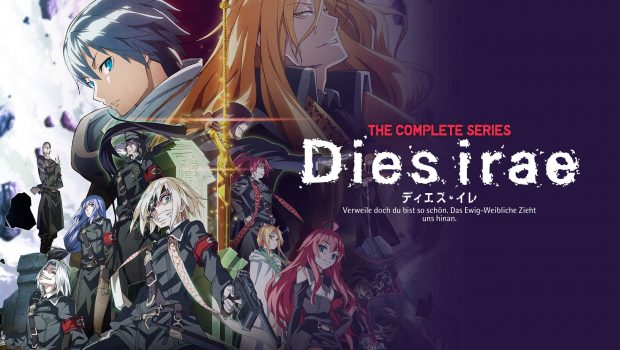 Summary: A slightly underrated series that failed to maximise potential as a direct result of a small budget derived from a dedicated fan base. Read the Visual Novel

The story of Dies Irae follows one of the closing battles in World War II, the Battle of Berlin, in which a group of sorcerers or powerful individuals known as the infamous Longinus Dreizehn Orden performs a ritual using the lives lost in the battle as a sacrifice for their spell.

On May 1, 1945 in Berlin, as the Red Army raises the Soviet flag over the Reichskanzlei, a group of Nazi officers conduct a ritual. For them, the slaughter in the city is nothing but the perfect ritual sacrifice in order to bring back the Order of the 13 Lances, a group of supermen whose coming would bring the world’s destruction. Years later, no one knows if this group of officers succeeded, or whether they lived or died. Few know of their existence, and even those who knew began to pass away as the decades passed.

Now in present day Suwahara, Japan. Ren Fuji has been spending the past two months in hospital, recovering from injuries sustained in a fight with his then best pal Shirou Yusa. The pair almost killed each other. Ren tries to move on with what remains, however he is plague nightly by terrible nightmares. He is desperate to return to his normal everyday life, but nothing will ever be the same again. 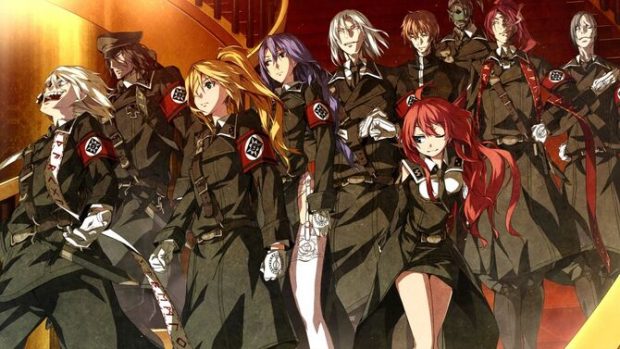 Dies Irae is a Visual Novel to Anime adaption. And one that expects you to have read it to understand everything. If you haven’t, the anime is going to confuse the hell out of you in the first few episodes. Then it’ll shove an explanation down your throat whether you like it or not. The it’ll pretend like nothing ever happened by throwing some cool action in your face and expect you to forget all about it.

Essentially the story boils down to this; episode zero is one of those “rewatch after episode seven  to understand fully”. Then it drops you into a short stint in a harem anime for no reason. Then Ren’s world comes crashing down again as he begins to have recurring nightmares that have him struck down by a guillotine.

Each time he wakes after these dreams a murder he finds out a murder has happened in town, in the same manner of decapitation as in his dreams. At first he brushes it off, until he begins to awaken in precarious situations. Eventually his best friend turns out to be the culprit as she manifests some form of power. Refusing to let her feel like a burden and coming to a realisation these powers are actually his. He takes them from back from her and begins confronting the sorcerers who’ve started making themselves known.

I found the series as a whole pretty confusing. I haven’t read the visual novel so a lot of the initial plot points I really didn’t get. Even after the somewhat rushed and forced exposition episode tried spelling it out for me I still had trouble understanding it all. There was heavy references to magic, time travel, nazis, World War II. But by the end of the series it pretty much changed to a “he who wins the battle, shapes the world as he sees fit” kind of scenarios.  The characters themselves were rather bland; generic bland anime hero, generic bland bad boy best friend, generic bland cute childhood friend, generic bland gorgeous love interest.

They were just characters that have all been done before, except the crossdresser, that was a bit different. Every bad guy had their own bland, over done schemes and every good guy just wanted everything to go back to how it was. The series felt really rushed and having found out that the series was essentially crowd funded into existence I suppose I can’t really blame them. Budgets can only stretch so far. 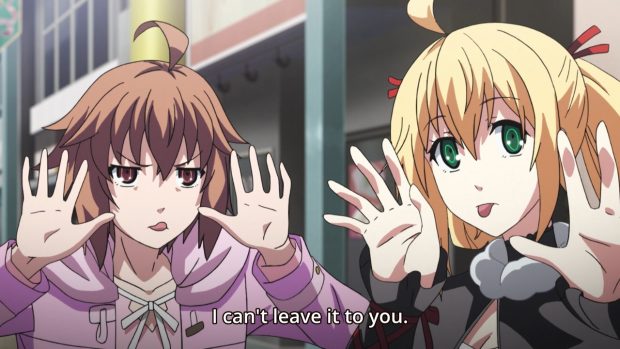 I can’t be too harsh on the series though because I didn’t really mind the art style. Though the designs have been done before the detail in them is really well done. I can’t help but see floppy puppy dog ears in Kasumi’s hairstyle and I have to admit Shirou, though somehow looking much older in his design does look like a delinquent baddass. The main antagonist Reinhardt actually looks great too, something eerily angelic yet demonic in his appearance and demeanor.

The animation in the series is really great and after hearing about the crowdfunding. It especially impressed me. The fight scenes, albeit short, are incredibly well made, animation is fast yet super smooth. For dreary and drab battlefield settings, they managed to breath light and life into the fights. There were, as always, notable downfalls however. The CG on the giant skeletons were absolutely terrible and the colours used simply hurt my eyes to look at them. Certain background imagery didn’t really flatter me.

It’s like they put all the budget into the initial background, but subsequent layers just got really faded. Let’s be honest though, the real budget blowout was the giant gold castle. Every time that was on screen everything else just looked like a cheap motel. Destruction physics were great but overshadowed by excess use of enough blood to fill several full sized swimming pools. In the end, points were won and lost over various design flaws and marvels to eventually break even.

Hmm, where to begin? A hit and a miss for me. I watched the English dub because I was too lazy to read subtitles.  Many of the members of the LDO were German, as such they found people who were surprisingly, simultaneously both good and bad at German accents. However Marie, sounded a lot more French than German.

Now this might be true, as many Belgians speak German too on account of being invaded by them, but I can’t find anything that states this. Since no one else seems to have this accent and there’s no correlation I have to assume it was simply the wrong accent. I say that most of the cast were good at sounding German, which is true. After a while however listening to them becomes somewhat of a chore as their pronunciation of certain words, phrases and even entire sentences can get a little hard to understand. Thus I occasionally needed subtitles to understand. The rest of the voice talent seemed a little lackluster if I’m completely honest. Their deliveries felt a little detached from what their characters were experiencing.

If there’s one thing in the audio that demands respect, it’s the wicked soundtrack. The opening and ending tracks are catchy and suit the theme of the anime. But the insert tracks really steal the show. Especially the combat music. Heavy metal, when paired with the dark, twisted theme of the series. It’s a nigh perfect match. I really can’t sing enough praise, when the music kicks in, you know you’re in for some good combat action. 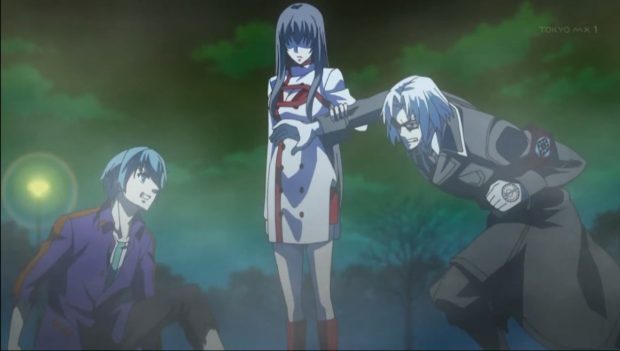 The series definitely came off as rushed. A lot of plot had to be crammed into the initial run of eleven episodes. With the addition of the final six episodes there series found some much needed space and I felt this is where the visuals also stepped up. Unfortunately by that point a lot of the damage to the story was already done and while it was paced better, they couldn’t quite recover. With the usual textless opening and ending songs as special features there really isn’t a lot I can say about that. I’m a sucker for deleted scenes and recording bloopers, so I’d love to see something like this in future anime.

If the team had a better, more stable budget to work with and time to spread things out the series could’ve lasted a full twenty four episodes and been a much better viewing experience as a whole. This isn’t an anime I would outright recommend to readers and friends alike. But if you can get past the initial mind games of the first six or seven episodes, the series might surprise you a bit. The latter half certainly had my attention focused on some really great action sequences. 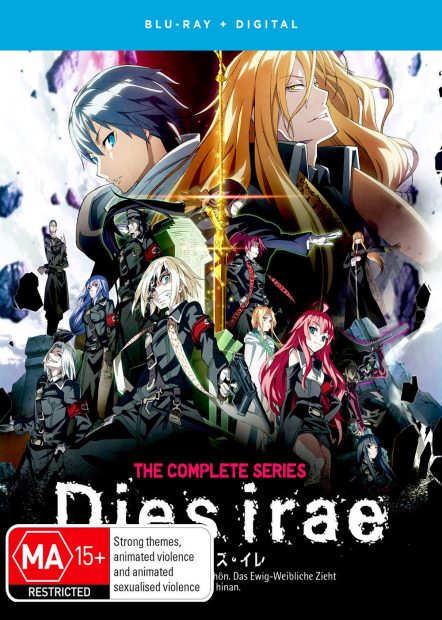