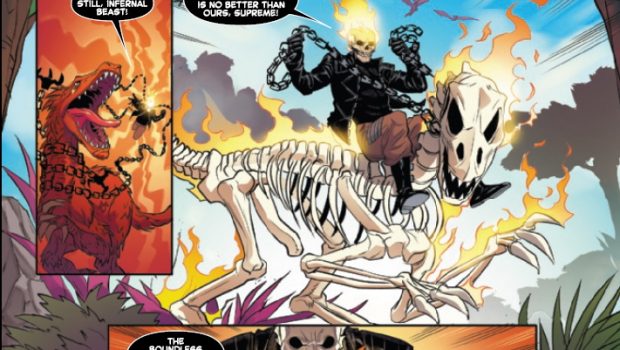 Summary: An interesting story from the perspective of a "bad guy" where even the people on his side get sick of him. No Spiderman to ruin his plans turns out to be not the best thing who'd have thunk it?

Doctor Octopus’s meddling in the multiverse has caused a paradox which has annoyed the other Ottos on his team: Hulk (Otto Banner), Ghost Rider (Otto Blaze), Wolverine (Otto Howlett) and bought his meddling to the attention of Sorcerer Supreme Octopus (Otto Octavius) who zaps them through the portal into his domain.

After the Eternals movie died in the arse it feels like Marvel is going hammer and tongs to promote the idea of the multiverse even though the core audience for the movies is not really the people who read comics these days it is a lot broader.

It is still an interesting story hanging out with the supposed “bad guys” who have their own problems and get sick of each other even more than the heroes do.

Even though there was an issue before this one I did not feel like I had missed anything and it is linked to the Devil’s Reign storyline but you don’t really need to have read all of it to get the story.

Well worth checking out if you are a fan of Doctor Octopus and want to see a story centred around him without Spiderman turning up to ruin everything.