Summary: A Good Vs Evil ARPG as The Devil's Soul Collectors or Gods Earthly Protector.

After losing your girlfriend, your boxing career and even your life, what else is there to lose? Sounds like the best time to become a contract killer for Lucifer to exact your revenge against all who have wronged you. Enter Desmond, an amateur boxer who gets fired from his job, loses the biggest boxing match of his career, loses his girlfriend to a co-worker and eventually drives his expensive car off of the bridge. You wake up to find out that you have entered Hell and are destined to become the Savior and Destroyer of Earth. Time to become a contract Soul Extractor for the Devil in a classic good versus evil plot.

You play Desmond, who becomes the Savior and Destroyer of Earth. But what does that mean exactly? You begin the game reaping souls from everything you come across in this action combat role playing game to power your abilities. While doing so, you are working for the Devil contracted to hunt down specific people or beings to reap their soul of their wrong doings. Eventually you run into an Angel who tries to recruit you to fight for the side of light. Here you must make the decision to be the Destroyer or the Savior of Earth. I went against the grain and chose to become a Destroyer. Because the Devil is literally fire and you must fight fire with fire.

When starting the game you started out with no real abilities other than what Desmond knows best, hand to hand combat. Swatting away demons left and right in Desmond’s new partial demon form was some good fun until you unlocked his Rage Mode where all Hell, literally, breaks loose. Your attacks become faster and harder to dodge while you become basically invincible for a short period of time. As you collect more souls, you are able to unlock more abilities. For me, this was a huge plus as it allowed for more character customization. There are 3 main abilities that are accessed through your quick bar. On top of the 3 abilities, you unlock passive skills to modify your abilities. 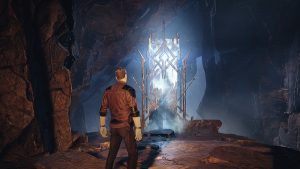 The story is based on the original novel by Paweł Leśniak “Equilibrium”. Boy does the story telling feel really good. Everything Desmond experiences, I was fully capable of relating to. Every decision Desmond made is also a decision I would have made in each scenario. Because we are dead, why not? The hunt for my bestfriend who my girlfriend cheated on me with felt visceral. Every crucial move to get closer to the goal felt like a weight off my shoulders. The constant struggle between good and evil despite constantly choosing evil.

The combat does have some 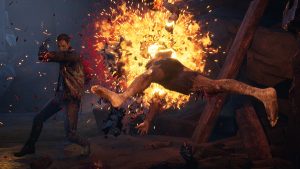 flaws despite how much fun it is. You spend a lot of time doing the same 3 or 4 combos throughout the entire game. Mixing in the special attacks made each encounter a little more strategic. My biggest complaint was how you couldn’t do anything combat related outside of combat. You only enter your pseudo-demon form in combat. When he transitions you know exactly when an encounter is going to happen and gives you a few seconds to get ready.

My goodness the best thing about the game is the amazingly written soundtrack. Musical placement is top notch featuring perfect timing of certain musical clips during cut scenes. Combat music is fluid and shifts in and out during non-combat sequences is really well done. The non stop action music makes everything feel fast paced even during the slower parts of the game. Every single track is a hit and just maintains the overall flow of the game. 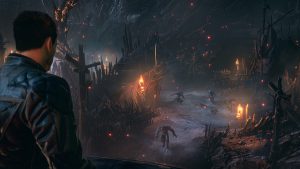 Graphically, the game is beautiful when playing on ultra. There are tons of beautiful textures and animations along with the pure amount of visual effects making the overall look pop. When running there water there are splashes. Every footstep is traced by a footprint. I especially loved when an enemy is killed, the demon disappears into a flashy dust particle. There are even finisher animations that are dependent on the enemy’s size and where you are standing in relation to it.

This game is great, absolute masterpiece in a genre that hasn’t really been popular in the scene. There’s great voice acting, a beautiful soundtrack and tons of action. If you’re looking for a great storytelling action based role playing game while fighting for good or evil, this is the way to go. Aside from a few frame drops here and there and the random audio drop, this game is a complete masterpiece. A diamond in the rough if you will.