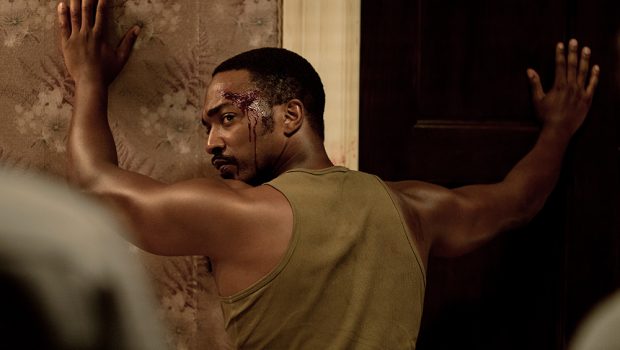 Kathryn Bigelow has directed two films about the War on Terror, The Hurt Locker (2009) and Zero Dark Thirty (2012), which were both set in the Middle East. Her new film is about the 1967 race riots in the US city of Detroit. It is a fictionalised account of a real crime case where three Black men were killed inside a motel by crooked White cops who then found themselves on trial.

This is as much a war film as the previous two features. It is also the least emotionally cold of the trilogy because its characters are entirely sympathetic as they are unquestionably the victims of abuse, bullying and eventually murder.

While the main characters in The Hurt Locker and Zero Dark Thirty, both White, relished their personal agency towards combat and government investigations, here we feel the powerlessness of mostly Black characters because of the impossible dramatic circumstances into which they are imprisoned.

What makes Detroit unique is the omissions for which people are likely to criticise it. It deliberately sidesteps biographical clichés to present a devastating, ground-level view of the riots, police brutality and humanity’s senseless reliance on violence. While Detroit recreates the 1960s it also dramatises a different type of War on Terror, where domestic terrorism isn’t instigated by Muslims or Arabs but White American cops who are radicalised by their own self-importance and are too powerful in hapless urban environments.

The artistic challenge for Bigelow isn’t gender or because she’s highlighting police corruption. Instead, some have taken exception to a White filmmaker addressing the suffering of African Americans. Writing for the website Roger Ebert (www.rogerebert.com), Angelica Jade Bastien, a Chicago based film critic, gave the film a negative review and stated:

“Detroit was directed, written, produced, shot, and edited by white creatives who do not understand the weight of the images they hone in on with an unflinching gaze…Detroit is a hollow spectacle, displaying rank racism and countless deaths that has nothing to say about race, the justice system, police brutality, or the city that gives it its title.” 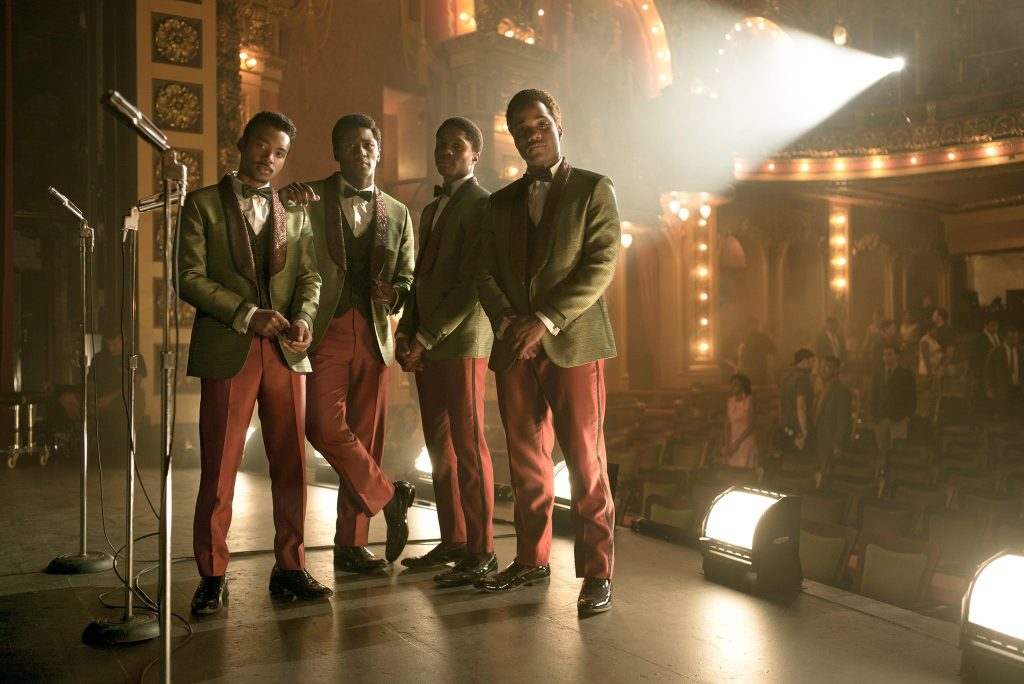 On the contrary, Detroit’s opinions on its subjects are firmly stressed in the uncompromising images it creates and the emotional registers of disgust it aims to draw from us. The first of these visual statements is to immerse us into a ground-level perspective so that we fully empathise with the minorities first, who are the undeserving targets of mindless police brutality.

While cinema is oversaturated with invincible superheroes and digital effects, Detroit reminds us that humans of flesh and blood still exist onscreen and that we can fear for their wellbeing because death seems as inevitable as sunlight to them. It is the vulnerability of genuinely good, innocent people here that makes us care about them and why the film’s images carry weight. People who do not watch a lot of news could look at this film and become more aware of the fear that torments minorities every day.

The script, written by Bigelow’s regular screenwriter Mark Boal, sharply introduces several players and sees them collide through one incident, leaving the film’s midsection as a horrific chamber piece. The first characters introduced are an energetic Motown group called The Dramatics, who are led by the singer Larry Reed (Algee Smith). 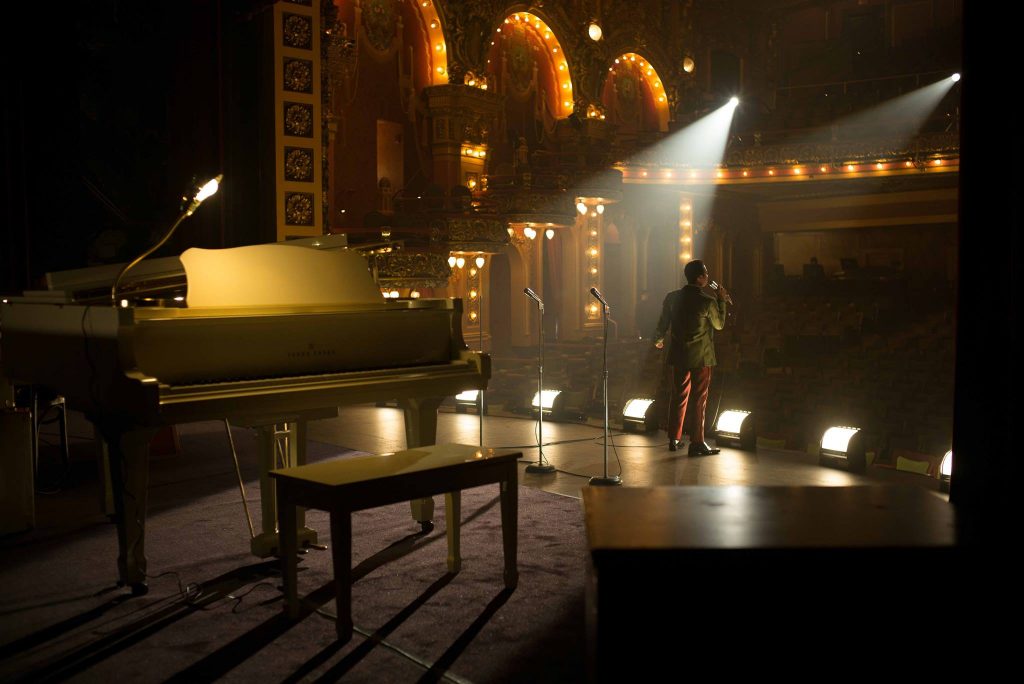 Backstage, they hope to showcase a breakout performance only for the theatre to be emptied because of the riots outside. The song they rehearse is called “If you haven’t got love”, which talks about loneliness without love. It’s used as an anti-war and anti-hate song, thereby spearheading the film’s political viewpoint that intolerance is not only physically damaging but blunts people’s enthusiasm for pursuing cultural artistry.

The members of The Dramatics escape to the Algiers Motel where they meet two white girls named Karen and Julie (Kaitlyn Dever and Game of Thrones’ Hannah Murray), along with some seedy characters who antagonise the police with a fake gun because for too long they’ve felt repressed. In these scenes, Algee Smith as Larry is particularly charming, funny and harmless, which adds to his likeability and makes the subsequent moments incredibly intense.

Another interesting character is security guard Melvin Dismukes (Star Wars: The Force Awakens’ John Boyega). Bastien criticises Melvin as being “too passive”. Arguably, Melvin is a sensible bridge between the Blacks and the trigger-happy White cops. In one insightful moment, he is guarding a store but quickly pulls a young man away from a White cop by saying they’re related. 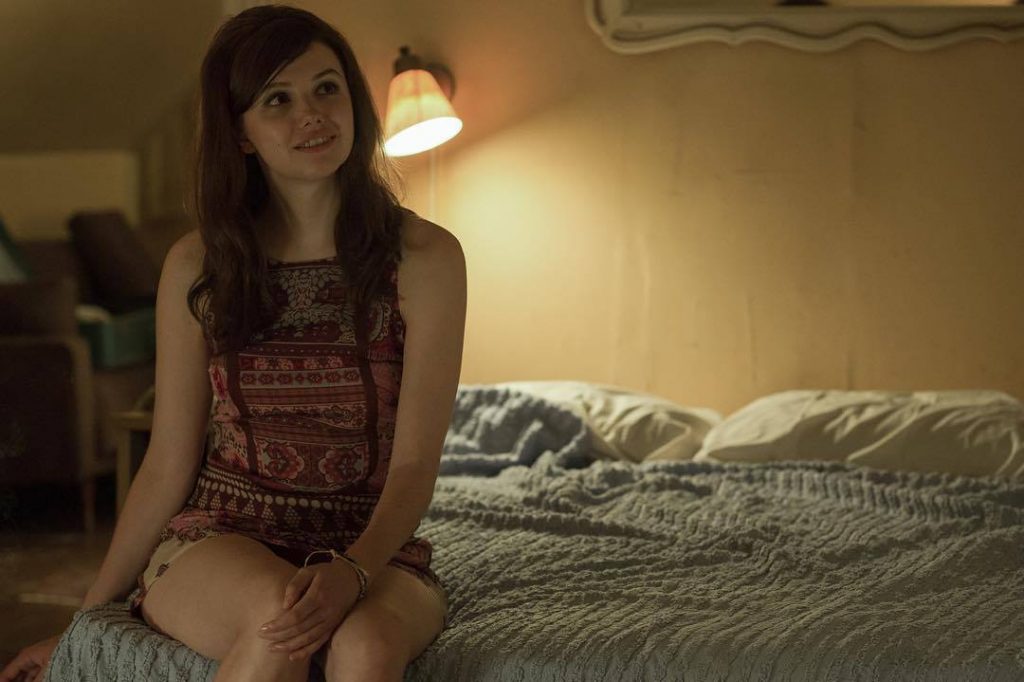 In another scene, he eases tensions with a group of soldiers by bringing them coffee. Yet as the danger inside the motel mounts, he becomes an observer to the action or “passive” because he quietly dramatises the lose-lose nature of intensified street warfare. Besides, what could one person, Black or White, do here against a room full of powerful crooked cops? His character’s inaction underlines how personal agency is stripped away from sensible, clear-minded African Americans in the face of overwhelming White corruption.

The last major character is Philip Kraus (The Revenant’s Will Poulter), a White cop who’s a young empowered primitive bully. He becomes determined to uncover who fired from the motel window whether the people he interrogates know or not. Bastien suggests that Bigelow “doesn’t thoroughly indict him or the systems that allow men like him to survive”, which is blatantly untrue.

Philip ranks as one of the most crushing dramatisations of bullying in contemporary cinema. Some will argue that he’s too one dimensional, but the directness of the characterisation is symmetrical with the film’s warzone approach. There are no flashbacks to his childhood to contexualise his attitudes because like most real bullies, there is no logical reason for their heinousness. Also, Philip might be a fictional character but no one would foolishly argue that there aren’t cops as calculated and overcharged as this in America. 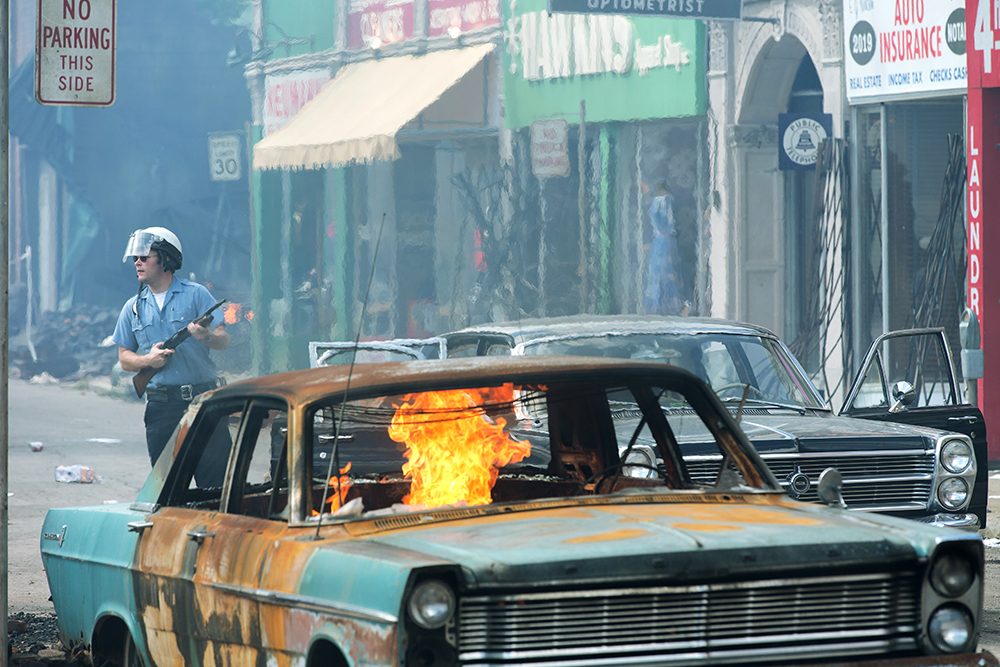 Will Poulter’s breakout performance is an astonishingly powerful one because his character carries such an unflinching and misguided sense of belief in his own power and sense of duty. His remorselessness and refusal to look weak is typified by the devastating ways he exploits his authority. It is very frightening and difficult to watch him push several people into a wall at gunpoint and abuse them. His brutality isn’t limited to Black people, but also Karen and Julie for whom we come to sympathise. It’s a nightmare of anticipation and dread, sometimes even without a punishing result.

An example of a system that allows Philip to survive and continue policing is before the motel incident, where he is lectured by his superior for shooting a Black man in the back but is released with only a warning. Bigelow’s major indictment of this monster overall though is the amount of time dedicated to dramatising his terrible and systematic process of bullying and interrogation in the motel. There’s arguably even too much time spent on this section of the film. Philip drags a person away to a separate room and then fires a gunshot near their head so that it will frighten the other witnesses outside.

Another example of the systems that allow Philip to survive is in the film’s hurried final act, where Philip and the other two policemen are taken to court. We see how a bloodless, reptilian attorney (played by The Office’s John Krasinski) defends the police by challenging the witnesses on their limited viewpoints when they were facing the motel wall. The film does feel a bit too straight-forward here because we’ve seen this type of story of injustice before but it’s still intriguing seeing the specifics of the case; additionally, a court ruling really did occur in real life for the story upon which Detroit is based. 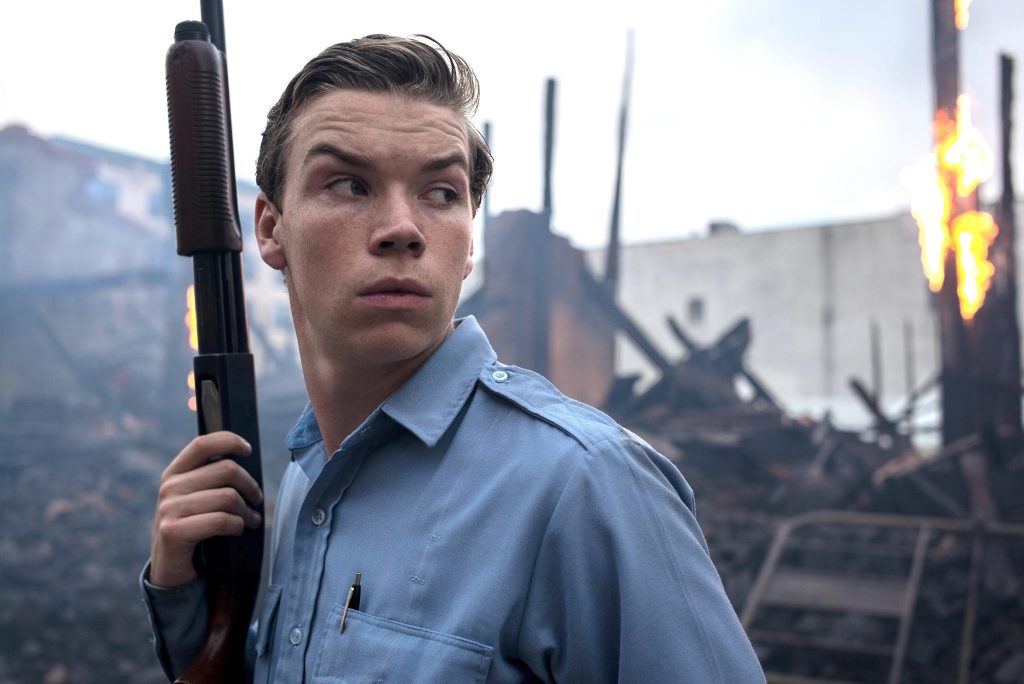 Bastien continues to ask who the film is for and then argues that the filmmakers “aren’t skilled enough to understand the particulars of blackness or bring the city of Detroit to life as another character.” The particulars are undoubtedly subjective for African Americans, but in my eye Bigelow and her creative team have masterfully recreated the 1960s without needless overstatement.

The look, the sound and feel of this movie, from the costumes, the selective soul music choices, to the grainy film quality and muted lighting, all seem right. Bigelow was born in California, but is old enough to remember the late 1960s. Due to the realism, there’s an unforgettable vividness to the violent riot scenes, involving the police, protesters and looters. Some of early shots are so well realised, such as an angry crowd circling a man on a soapbox, that it’s difficult to distinguish the fiction from the glimpses of archival footage used.

Backed by a career of filming action cinema, Bigelow’s shooting skills take full flight here. The jostling handheld cameras, paired with frequent quick cuts between the police and the rioters, bring dynamic energy to the early scenes without the images becoming overly blurry or chaotic. She has taken the Middle Eastern warzones of her other films back to the US to paint the domestic landscape as a fiery battleground. 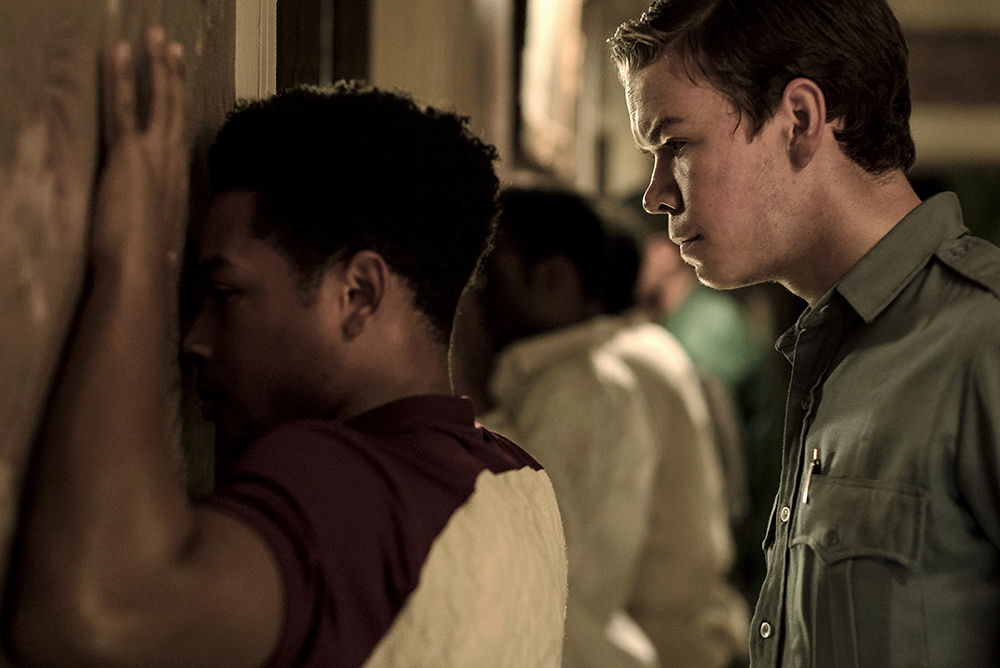 This is her own political statement of disbelief at how America has become at war with itself. Soldiers unknowing open fire on a little girl peeping through a window, thinking she’s a sniper, a gas station is set alight, and a truck full of heavily armed soldiers spread across the motel grounds. The heightened realism of the environment allows us to empathise with the Black characters as we’re collectively injected into hell.

Detroit isn’t hollow. It’s a deeply involving and emotionally affecting war film that dramatises how violence is cyclical and feasts on retribution and revenge attacks. The police bully African Americans, who understandably riot, but then it’s innocent people who are consequently punished. At 140 minutes, the film isn’t overlong but the pacing does sag slightly with the motel sequence, leaving the court case more belated than it should be.

Regardless, this is a film for smart people who are willing to engage with challenging, adult cinema to learn how dangerous it was for minorities in the 1960s and to become more aware of contemporary social conflicts. Detroit reminds us that without love, we’re all destined to become very lonely people.

Summary: This is a film for smart people who are willing to engage with challenging, adult cinema to learn how dangerous it was for minorities in the 1960s and to become more aware of contemporary social conflicts.