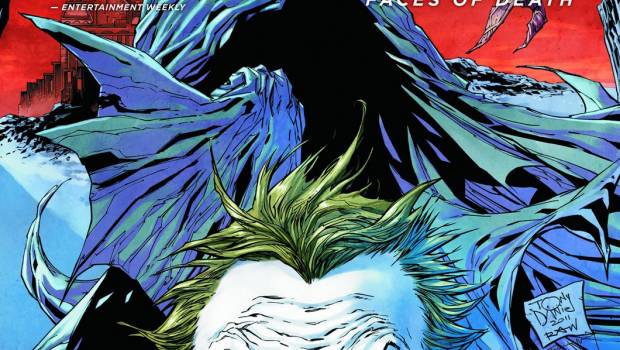 The Story: Even though we see a totally different version of the Joker personality wise from Scott Snyder, we get our first look The Joker in the rebooted DC Universe.

We open in year six of Bruce’s war on crime. We find out that the Joker’s killed 114 civilians during that time frame, most through various means. As Bruce runs the rooftops of the city, we find the Joker in a vicious fight with a fellow who wears a upper facemask that is most definitely made out of human skin. The fellow says he should have been expected as the Joker and him continue to draw blood.

Just as he murders the fellow, he is interrupted by a Bat drone as Bruce flies through the window in a customary entrance… except the Joker was ready for him and throws a bag of bombs (at least I think they’re bombs) and Bruce goes flying.

The Joker leaps out the window as Bruce spouts corny one-liners, but before Bruce can follow him, a little girl cries out for help (Why she was in the building, much less the same room is unknown.) THEN the GCPD run into the room and try to take Batman down (we find out the mayor ordered them to open fire) and Batman escapes while a hand we soon find out belongs to Jim Gordon takes the girl by the shoulder and leads her out. Goodness that was a lot of stuff that happened in the span of 3 pages. Oh did I mention that the Joker has been naked through this entire scenario? Because he is.

Batman arrives back at the Batcave in a SWEET looking Batmobile that I honestly don’t recall seeing ever again and drives through holograms that are built into the mountain. Alfred appears as a hologram (much more on this later) and converses with Bruce. They exchange the various pleasantries as Bruce laments that he still can’t catch the Joker.

After a short scene of Gordon and Batman conversing near the bat-signal, we see that the cops have somehow managed to track the Joker down. Except that it’s a bobby trap, because of course it is. Batman saves the cops and realizes that the Joker is watching from the gathered crowd. Batman gives chase.

Joker departs the seen and boards a train. He thinks he’s home free until a little girl says that she sees a giant Bat-monster. Batman enters the train as the Joker declares himself impressed. Joker tries to poison everybody on the train as he escapes and Batman vents the train long enough for the passengers to get out. He tackles Joker off the train and we finally get to see their fight. Bats gets stabbed in the collarbone and the ribcage. The Joker gets a few knees to the gut and a couple of forearms to the face. Batman throws him into a wall and gets shocked by the Joker’s buzzer. In a last ditch effort, Batman ducks a Joker leap and throws him off the roof. The Joker hits 3 fire escapes on the way down and lands in an alley.

Gordon: “Gotham is a hell hole, always has been, always will be”.

Oh god, when this issue came out, I was super excited. I had always read comics and had read 52 and Countdown all the way through for 2 straight years but had decided to duck out of most comics a quarter of the way through that godawful Trinity weekly. The New 52 officially got me back into all comics, not just Justice League, Green Lantern Spider-man and the Avengers permanently. I picked up every single first issue except I, Vampire, which I regret, but I digress…

Anyways, the first time I read this issue, I loved it. I loved the action beats, the story beats. Just everything about it was good, satisfying Batman. 9 years later and as a way more experienced reader though, this issue has some extremely glaring issues.

If you are just starting out reading Batman, this book is OK, but go pick up the first volume of Snyder’s Batman run for essential Bat-reading.