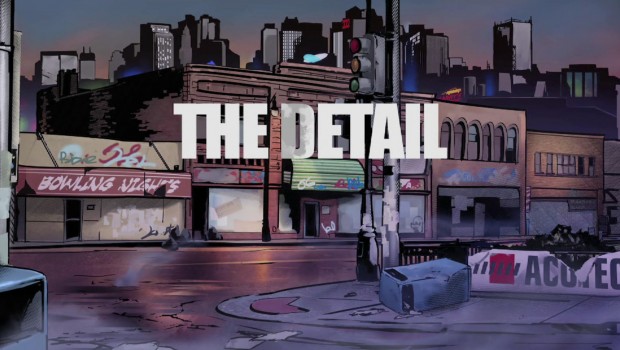 The Detail Ep. 1: Where the Dead Lie Review

The opening cut scene of The Detail is utterly perfect. The almost-monochromatic graphic novel aesthetic establishes the bleak and gritty tone. The solemn, almost haunting music adds a sense of hollowness and captures the essence of absolute jadedness that protagonist Detective Reggie Moore embodies. And Reggie’s monologue—in which he laments the murder of a friend and muses on whether he could or would have done anything differently—beautifully illustrates the nature of choice in this crime noir adventure.

The Detail is from the same vein of adventure games as Telltale’s The Walking Dead and The Wolf Among Us, but don’t mistake it for a simple imitation. The Detail is a cleverly constructed, creatively presented, and expertly written (episodic) tale taking us into the dark side of crime. Reggie shares the mantle of protagonist with former-criminal-turned-informant Joe Miller, who’s forced back into his old gang to find out the truth behind a gangland murder. Rookie cop Kate Hayes also gets a fair amount of the spotlight, which gives us three distinctive points of view through which to experience this crime-riddled city. 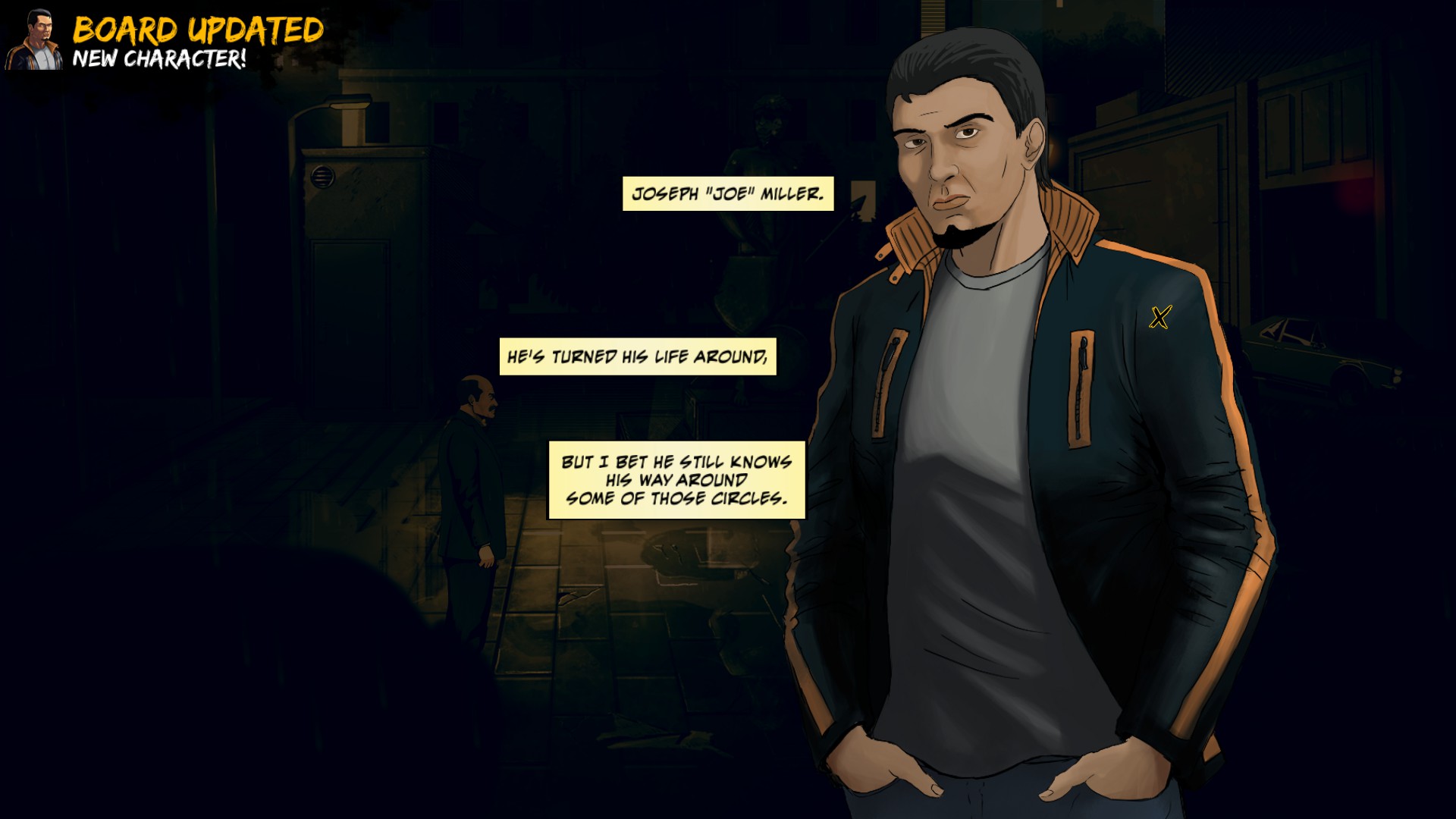 Most of my criticism of The Detail Episode 1: Where the Dead Lie comes with caveats. The lack of sound effects and voice acting both leave The Detail feeling a little less lively—but to add either would likely compromise the graphic novel aesthetic. The animated ‘cli-clack’ of a door being lockpicked is superb even without sound. Likewise, the strong character personalities shine with text alone; spoken dialogue would undermine the effective design. However, I think The Detail could benefit from ambient noise; the backing soundtrack, while solid, can become overbearing without some white noise to take the edge off. Muffled conversations while Reggie is in the police station or the occasional clinking of plates and glasses while Joe is in the Lucky Dragon restaurant would breathe more life into these locations without detracting with overbearing sounds.

Exploring areas can be troublesome thanks to a temperamental screen scroll. The camera does not shift until the character reaches the edge, making it impossible to quickly check the borders of a location. Instead, the character must slowly lumber over until the screen moves. The pace of movement is a fraction too slow; the sense of gravity brought by the slow, deliberate movement is diminished by the slightest hint of tedium. 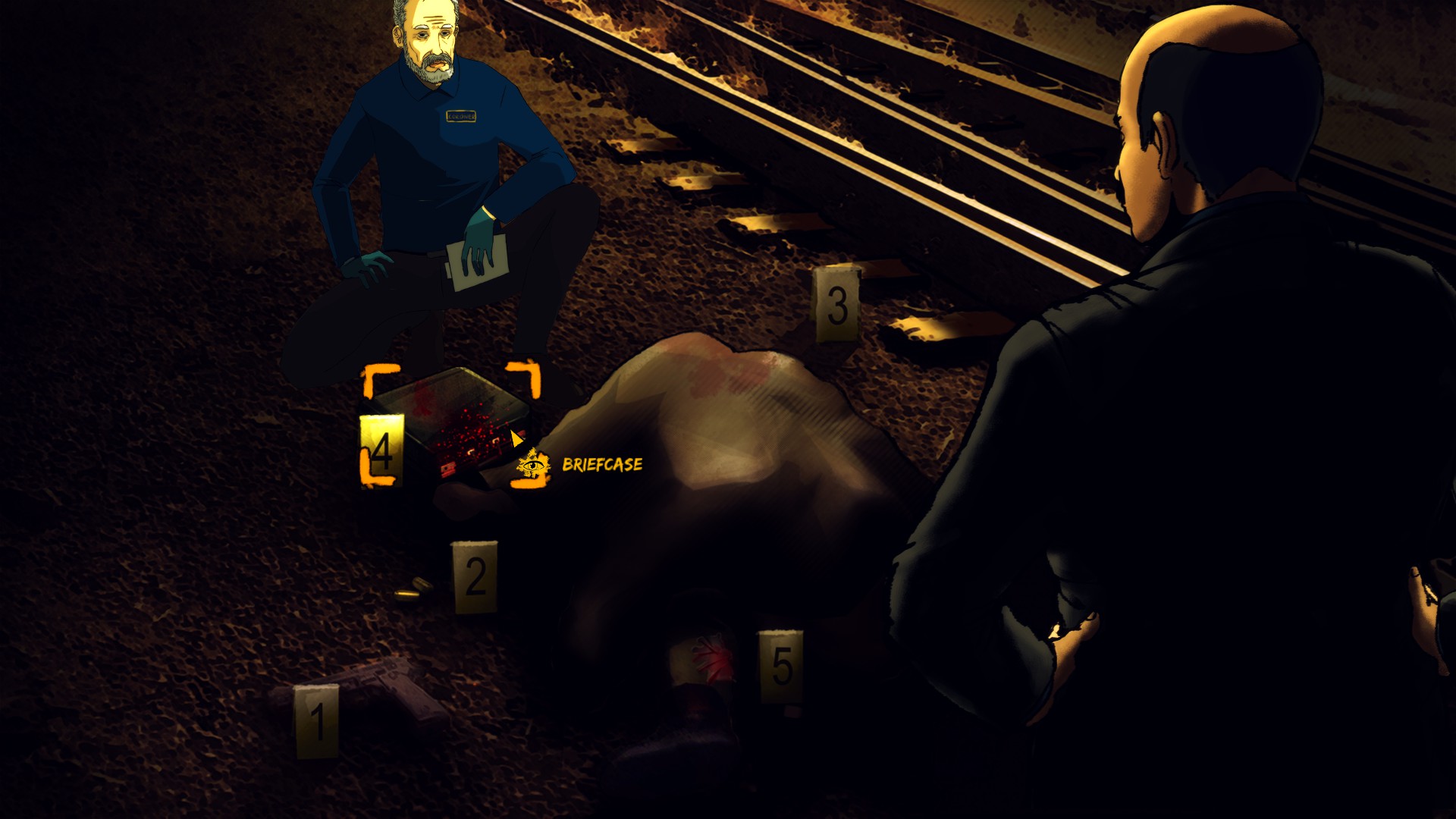 The first episode is also a bit light on non-dialogue related gameplay, particularly of the crime-scene-investigating variety. It’s clear that dialogue choices and the repercussions of those choices are the focal point, but some meatier interactive sections would not go amiss. The single crime scene investigation has—unless my detective skills are lacking—only a single ‘secret’ to be found.

Fortunately, the dialogue choices that make up so much of The Detail are effectively implemented. Every choice impacts the way conversation unfolds and the outcomes have various effects. While the first episode has no radical, story-altering decisions, I did find that the choices I made had an impact on me. 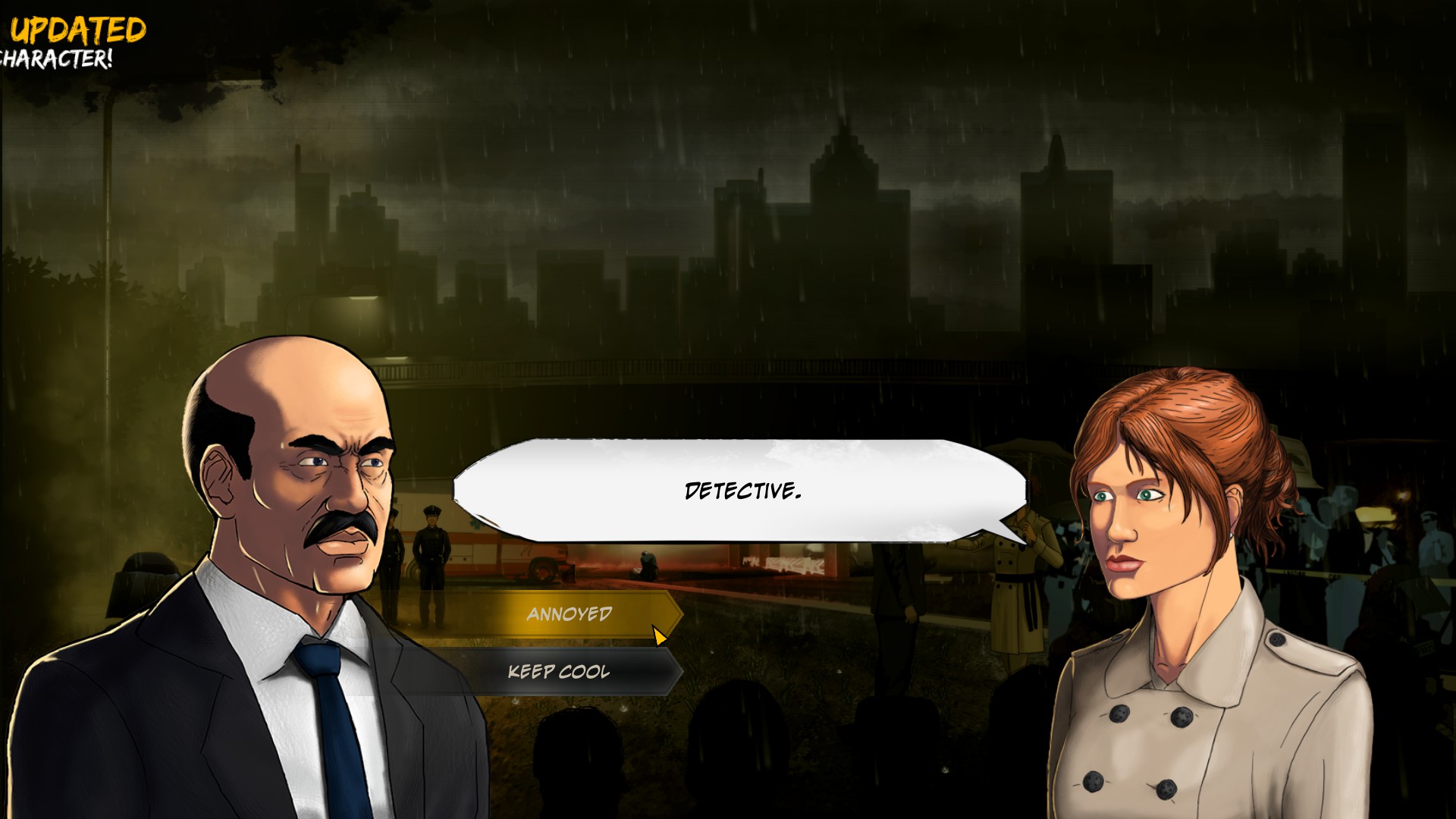 How Reggie handles the situation with a child molester in his first segment changes the newspaper story shown in his next appearance. Reggie is an old-school cop and has a child’s life at stake, so he gets a little heavy-handed—I may have smashed the suspect’s face into the table. It saved a life, but it meant the bad guy walked; throughout the rest of the episode, I played Reggie a little more by-the-book to avoid similar circumstances. It’s through these little ripple effects that The Detail encourages role-playing and enriches the narrative. Somehow, each of the playable characters—Reggie, Joe, and Kate—are wonderfully characterised while still giving players some freedom in dictating their personalities and actions. (And that’s not to mention the supporting cast, who manage to account for the staples of crime dramas without feeling stale or two-dimensional.)

But it doesn’t always work as planned. One particular scene—where Reggie is faced with an unconscious, underage, and half-naked girl lying in a known gang member’s house—gives the option of leaving the girl behind to a life of sex slavery in exchange for vital information. Reggie himself even comments that he must be losing it if this option is picked; here, player freedom is regrettably emphasised over consistent characterisation. But it’s the sole instance of the rich writing wavering—and is appropriately called out as bizarre by the characters involved. 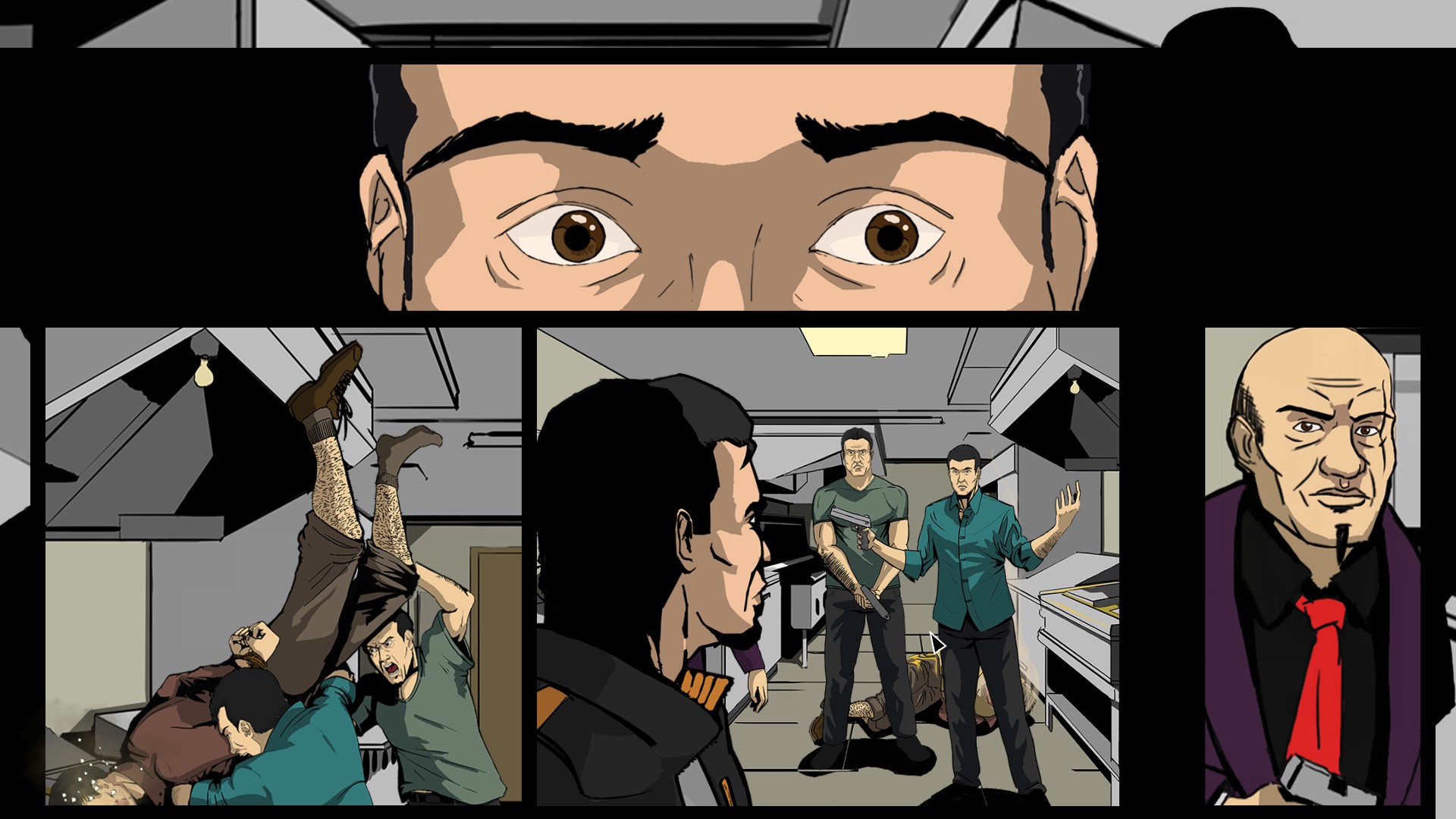 Sadly, The Detail seems to pass by a little too quickly. A first playthrough with cautious, patient exploring of every last detail still wrapped up around the one hour mark; a quicker player might feel short-changed. But expanding the episode runs the risk of upsetting the delicate pacing balance; and besides, somewhere between forty minutes and an hour seems dead-on for a crime drama episode, game or not.

Perhaps my favourite part of The Detail—or second favourite, after the opening—is how subtle the game design is leading up to the finale. Let me rephrase. The Detail Episode 1: Where the Dead Lie ends as sublimely as it begins. Kate encounters a combat situation that mirrors her first encounter; astute players will note the similarities in build between her assailants and opt to employ the most effective attacks. This encounter culminates in a familiar—albeit more advanced—version of the very first ‘quick time event’; The Detail teaches players exactly what it needs to know to succeed, but still retains a semblance of challenge. 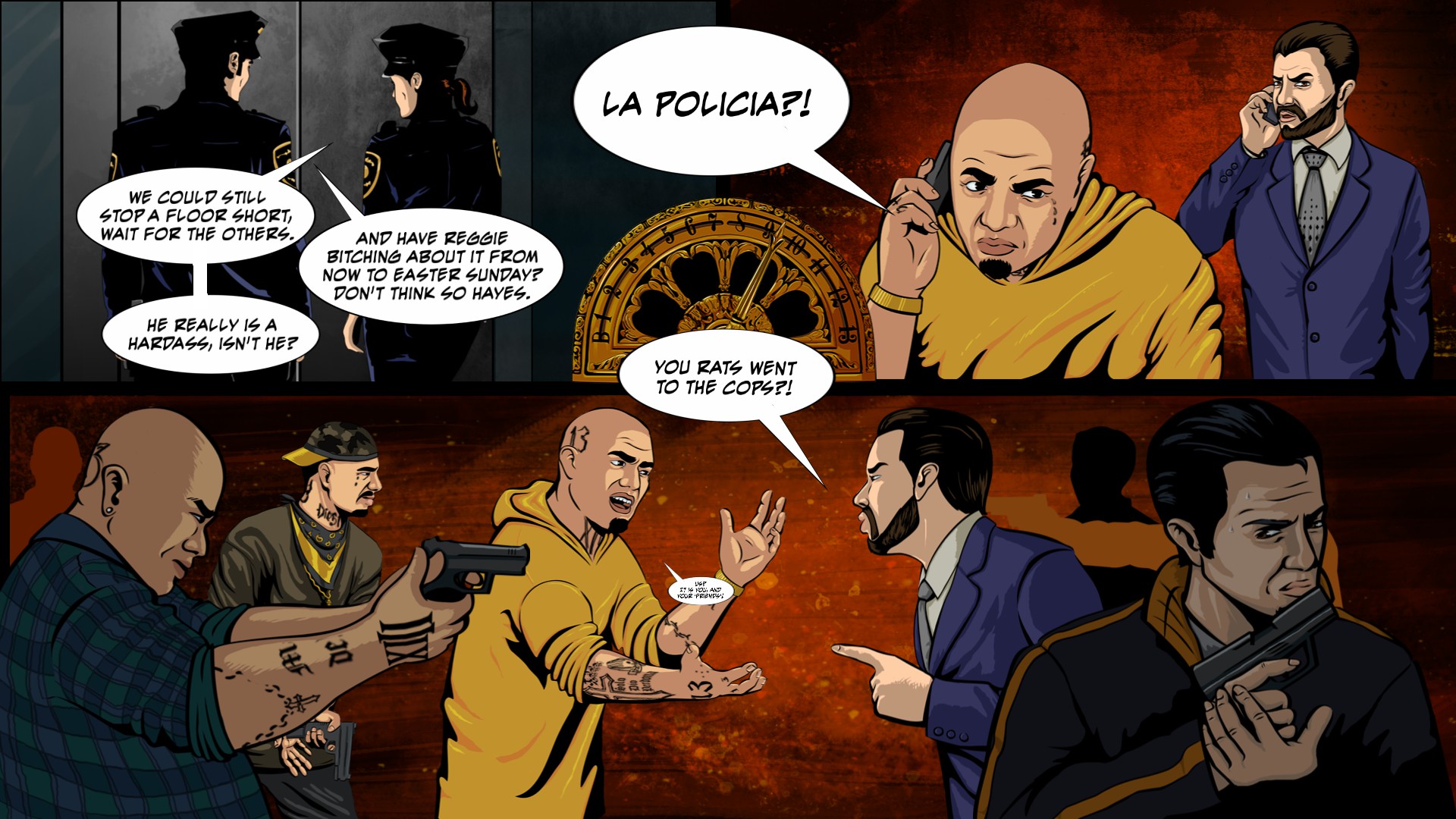 The finale also excels thematically. Reggie can (seemingly) be as much of an unprofessional, disrespectful, jaded jerk—and he would be justified, given the circumstances—as he wants, but the result is the same: crime is out of control in this city and something serious needs to be done. The revelation is an excruciatingly successful hook for Episode 2. I’m eagerly awaiting it already.