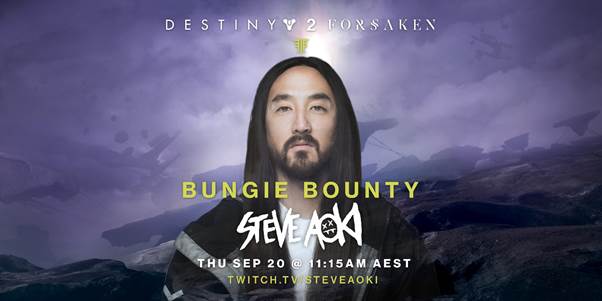 As part of the Bungie Bounty Program, players who are playing Destiny 2 at the same time as Steve on PlayStation®4 and enter a match with Steve’s fireteam will have a chance to earn an exclusive “Sign of Mutual Combat” emblem by winning the match.

Steve Aoki says, “I spend a lot of my spare time playing video games, so being invited to be a Bungie Bounty for Destiny 2: Forsaken is just awesome.

“I’m a massive fan of Destiny 2; it’s one of my all-time favourite games and I’m very excited to jump into the new Forsaken expansion at Tokyo Game Show this year and kick some ass in Gambit. Guardians – get online and play with me.”

Tune in on 20 September, 11:15AM AEST at www.twitch.com/steveaoki to watch Steve live.

Destiny 2: Forsaken is available now on PlayStation®4, the Xbox One family of devices including Xbox One X, and PC. The PC version is available exclusively on Battle.net®, Blizzard Entertainment’s acclaimed online-gaming platform.