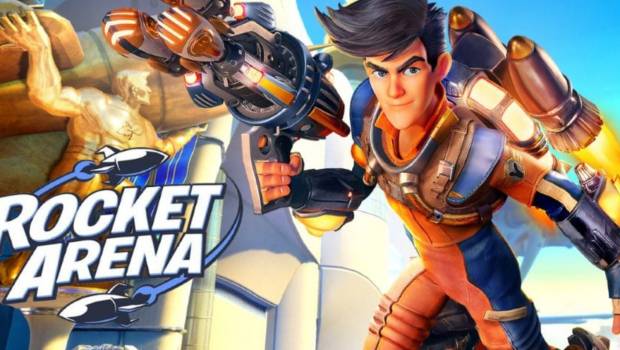 Tell us a little about Rocket Arena and what excites you the most about it?

Lahela: My favorite thing about Rocket Arena is its fast-paced gameplay and “Never Say Die” combat. I like that I can jump into a match and immediately get into the action. Even when knocked out, I am still able to help my team by relaying what I am seeing from the bird’s eye view of the arena that I have when flying back into the match. The matches are quick and average a little over five minutes so you don’t need a lot of time to play but I will warn that it is very easy to lose track of an entire hour or two or three if you aren’t careful.

Gregg: What excites me the most in Rocket Arena is the unique blasting mechanic provided by the colorful hero’s rockets in the game. Instead of having a health bar, heroes have a Blast Meter. The more you blast an opponent, the further their Blast Meter fills and the further they fly – until they’re knocked out of the arena! You’ll have to master each hero, because they all have their own take on rockets, abilities, and a playstyle that is entirely unique to them. In addition, your own rockets don’t hurt you in Rocket Arena; so you can rocket jump as much as you want, which opens up additional ways of movement and behavior, like rocket climbing up walls to save yourself from falling off a map or climbing high to get the drop on your opponents. While Rocket Arena is easy to pick up and play, hardcore players will find plenty of stategic depth with the rocket blasting gameplay and different hero combinations within teams. 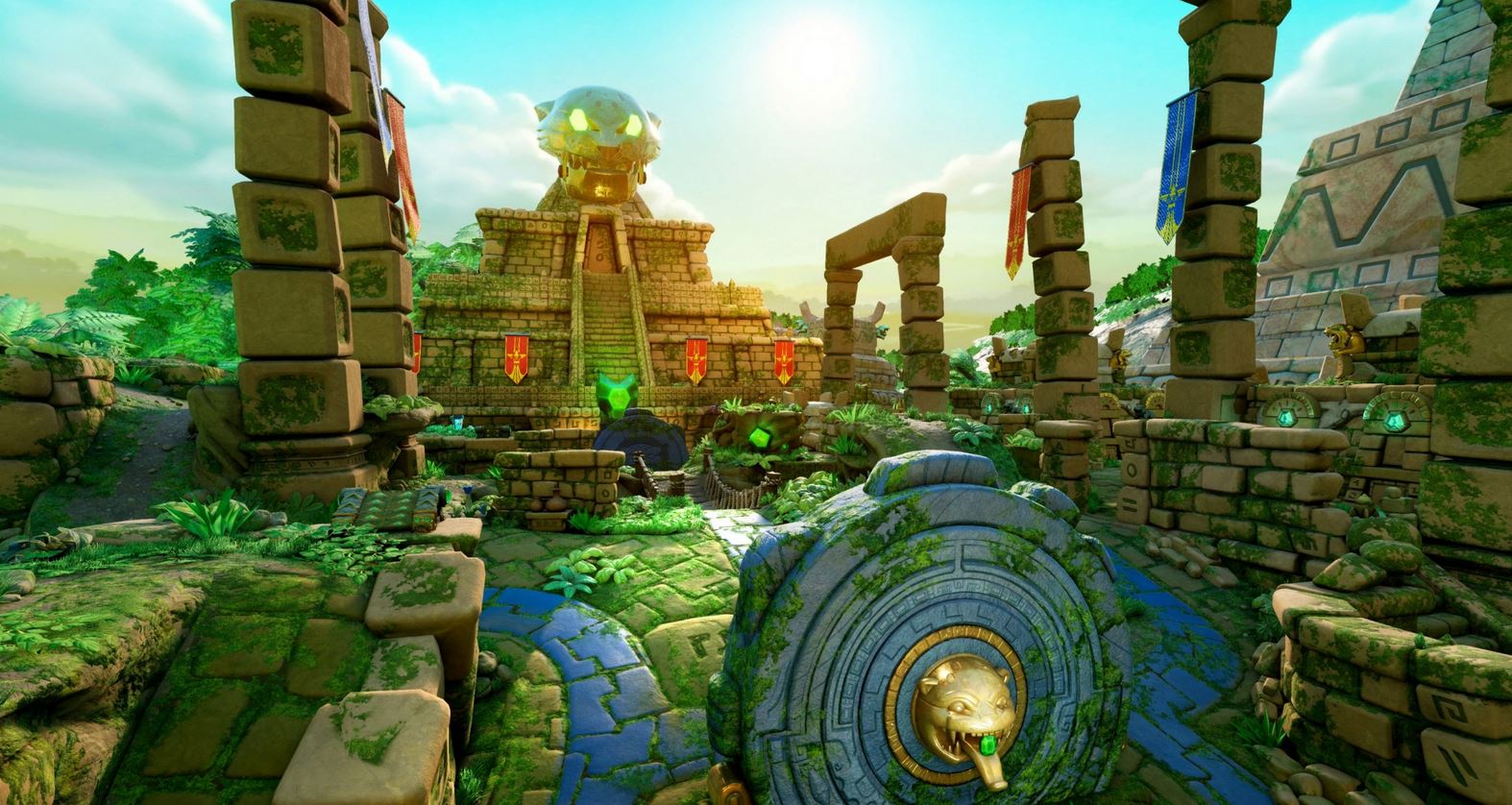 The planet of Crater? Wow! It looks amazing and has so much variety. Can you walk us through the level design and its creation?

Gregg: Thank you! At Final Strike Games we definitely share a passion for multiplayer, in fact it’s our motto: “We Make Multiplayer” and we’ve had so much fun making Rocket Arena, and the world of Crater, we hope the joy and passion shines through and people can’t help but get a big smile on their face while playing. During development, we’ve had the great fortune of working with incredible talent to help make Crater feel alive, to name a few of the creative people we’ve worked with: Len Uhley, Jack Wall, and our Art Director Dev Madan. Len is most known for his hilarious writing on Talespin, he helped bring the world of Crater to life; Jack Wall worked on Mass Effect and Call of Duty franchises, he wrote our dynamic in-game combat music; and Dev Madan is FSG’s Art Director, he was one of the original creators of the Sly Cooper franchise. That’s just to name a few, it’s been a complete joy working with our close partners and the team at Final Strike as a whole – I mean, here we are years later, we still playtest together every day, and we still get in Slack channels afterwards and talk about what new exciting things we can bring to the world of Crater! It’s just such a good group. I can’t wait for everyone to play the game when it comes out July 14th.

How does the level design of Crater work with the gameplay of Rocket Arena?

Gregg: Maps in Rocket Arena have to be built and designed to work very closely with our rockets-only gameplay mechanics. In Rocket Arena, rockets don’t destroy; instead rockets blast, push, pull, and interact with gameplay objects and heroes. So maps have to be made to allow for players to run along and blast one another, find items, complete objectives, and trigger dynamic map events, (Like the defensive rocket barrage in the Temples of Jaaqua map.) but there also needs to be elements in each map’s design that allows higher skill players the opportunity to perform more advanced actions. Actions like rocket jumping, rocket climbing, edge-guarding, directionally spiking opponents into gaps in the arena, using sightline blockers for cover or traversal, and placing recovery platforms so players can perform a dodge, perform a stun break, land on the floating platform and get back into the action – avoiding a KO. Each map also needs to support every mode, since players can set up their own private matches and create their own custom map/mode combos with friends or practice solo. We spend a lot of time prototyping, playtesting, and iterating on each map to make sure it hits all of those key design points. 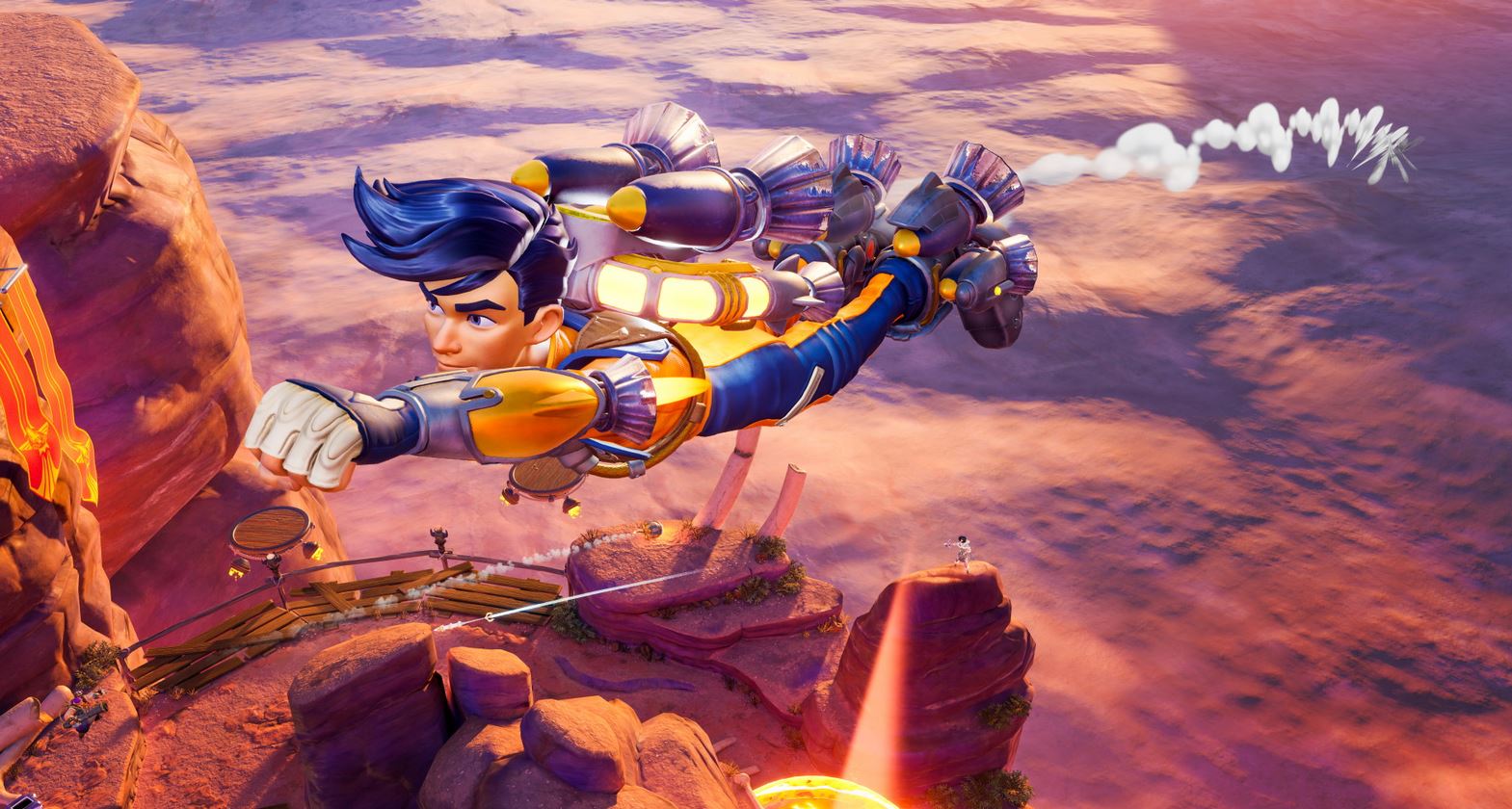 In creating a new world, what are some of the challenges and rewards?

Lahela: The wonderful thing about creating our world of Crater is that we can make up all the rules! We can create Crystal Reef where everyone is protected by a bubble under the water. Here Amphora leads the research to understand the Star of Crater which is Crater’s largest crystal that is imbued with glowing energy. We can also create The Wilds where dinosaur-like creatures used to roam or maybe they still do? Boone, along with his winged pal, Zik, has devoted his life to tracking down a real life Megadon.

Gregg: I think finding the world of Crater initially was the most challenging part. It was blue sky development. So originally we had no idea who these heroes were, where they came from, and what they were doing -it was all grey-box to start. As we prototyped heroes, maps, and modes; we started to look at travel posters and saw these fun characters in worlds that were entirely themed to them. So we started to get inspiration from that. We’d take an aggressive combat prototype and then write a personality to fit the playstyle. Then that inspired what kind of region and map they could represent in the world of Crater. We even wanted to design the rocket projectiles around the hero so that the silhouette, color palette, SFX, and VFX was themed around each hero’s personality and world. Not only does it make each hero really unique, but it improves gameplay readability as well. Now as you play you’ll see and hear a rocket and know “Oh! That’s an Izell player attacking!” or “Keep your distance, it’s a Blastbeard!” Today we have a good cross-discipline pipeline with art, story, and design all working together to make really rich worlds. We can’t wait to reveal more about the heroes and mysterious world of Crater to players in the future, I’d have to say that’s been the biggest reward.

What’s your favourite area of Crater and why?

Lahela: I love Serrata Peaks! Gothic castles and architecture inspired a lot of the areas of Icefall Keep. This is home to Kayi. She is a reluctant leader who would rather be studying art and music instead of lessons of war. The initial concept was that the fortress was more of a cage for her as she would rather be out in nature, so we played up the big angled Gothic shapes against soft rolling hills, where she really wanted to be. With Frostwind Grove, our Art Director, Dev Madan, wanted the centerpiece to be the great tree which is inspired by the paintings of Maurice Noble. Here again we played up the organic shapes of the tree against the hard-stone shapes of the castle. There is so much lore scattered throughout both Icefall Keep and Frostwind grove. There are tapestries that tell moments of Kayi’s life and the history of her family. There are carvings that illustrate key moments in the history of their people. There are even signs for lost pets and a place to buy rocket candy! You can find out more about the World of Crater in our trailer featuring its regions and maps here. 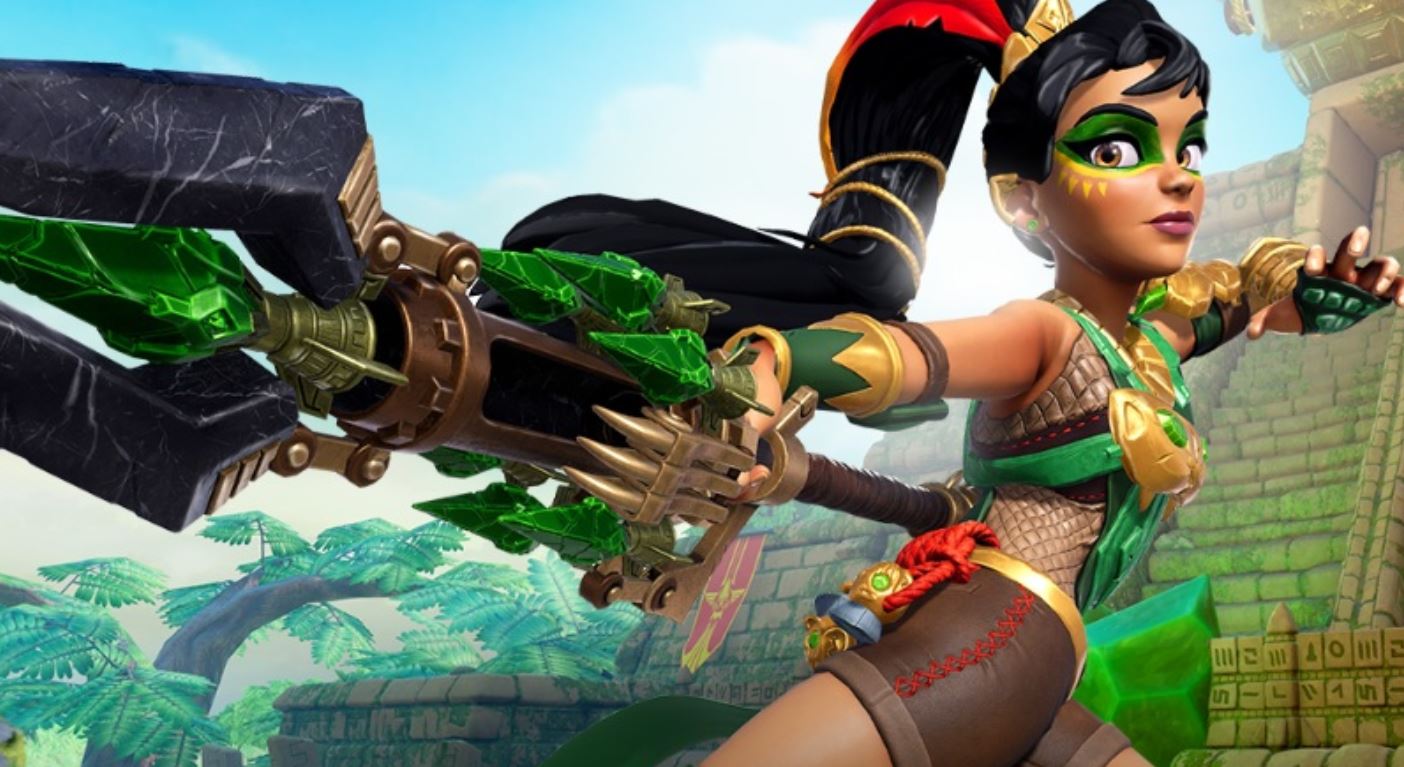 When Rocket Arena is launched, what should players be on the lookout for?

Gregg: There is so much to look forward to at Rocket Arena’s launch. It’s a one of a kind hero shooter with exciting rockets-only gameplay, the no-death makes for intense frenetic matches, KO’ing opponents out of the map is super fun, and heroes have individual playstyles – which allows for deep team combinations and strategies. We think it’s great for new players and skilled veterans alike. Not to mention there’s Cross-Platform Play, Cross-Platform Parties, 10 Playable Characters -each with 100 levels of progression rewards, 10 Maps, 22 Gameplay changing artifacts that can be powered-up in social playlists, and Daily/Weekly Challenges…but really that’s just the beginning! Players should keep a lookout for July 28th, which is the start of Rocket Arena’s Season 1. When Season 1 starts, a new hero will be added with another 100 levels of reward progression, the Season 1 Ranked playlist will begin with the new hero meta shift, there’s also going to be three new maps dropping over the coming weeks to mix things up, and there’ll be over 12 new event modes and playlists cycling though – and best of all, it’s free for all players. Player’s can expect new items, artifacts, and surprises to come in the future as well. We can’t wait to share all of the cool things coming up, so definitely keep a lookout for that, but we’re excited! 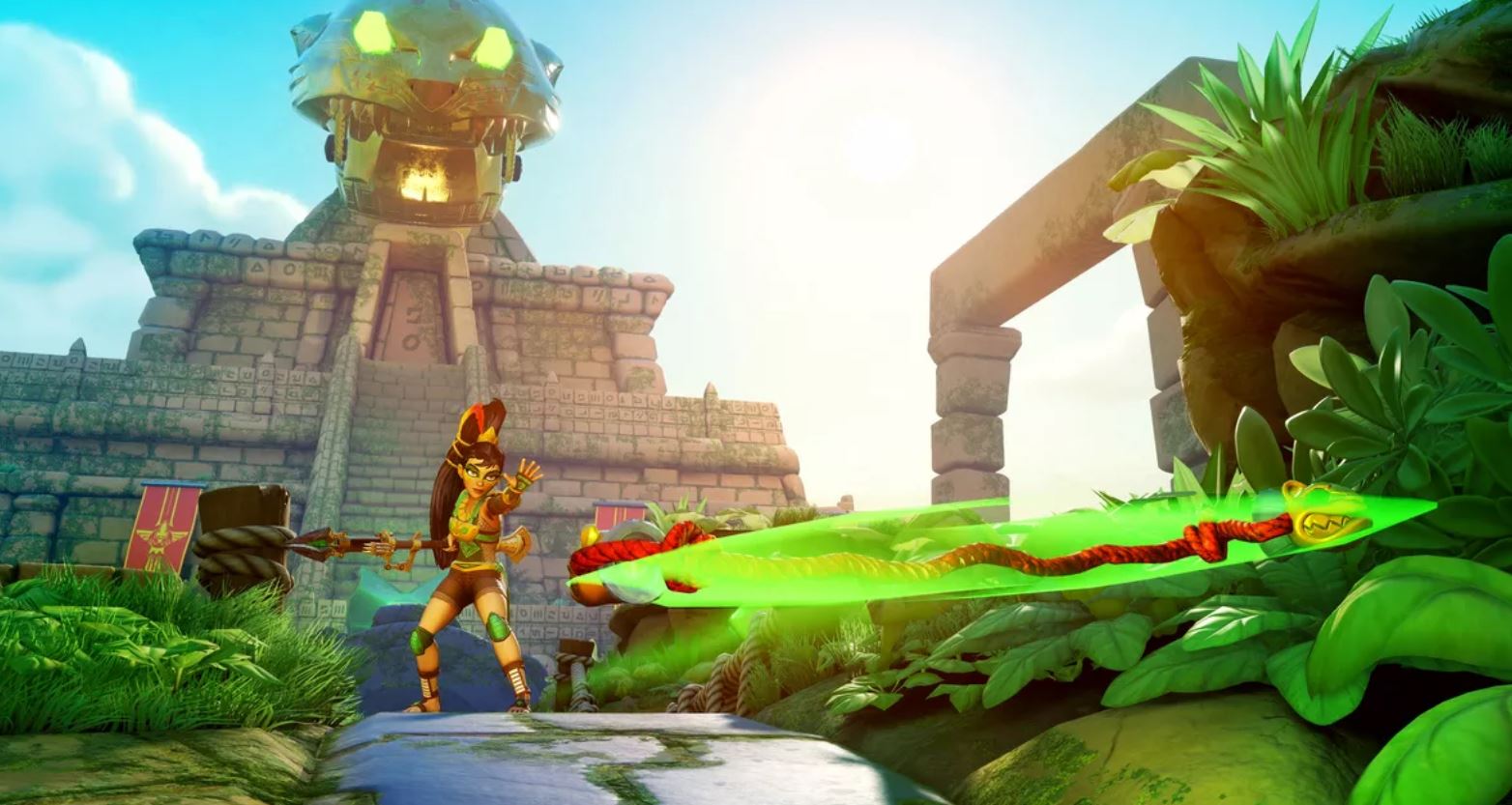 Lastly, who’s your favourite Rocket Arena hero and why?

Lahela: Oh goodness! I don’t think I can choose a favorite!! I love all of them for different reasons. If I HAD to choose, I choose Plink. While animating this little guy, I pulled inspiration from my own kiddos. How would a very excitable boy run around the arena shooting rockets that don’t harm you? Well, he would do it with reckless abandon, right?! He would teleport behind you and “boo!” pew pew pew pew pew. When he jumps, he would probably kick his feet in the air to try to give himself more height! When he is flying through the air returning to the arena, he would have fun with it and do a flip.

Of course, Blastbeard is my main dude. I always feel like I have a presence when I am running around the map as this jolly pirate. He makes me laugh.

I also adore Kayi because of her quiet confidence and graceful strength. She appeals to me a lot because of her sense of duty and loyalty to her people. She sacrifices her own happiness to be the hero that Serrata Peaks needs. While animating her, we tried to show her self-reflection but also that as a leader you do not have the luxury of hesitation and indecision.

Mysteen is the opposite of Kayi in that she is all about the razzle dazzle and the show! Mysteen was a lot of fun to animate because of her flamboyant personality. We used big gestures and twirls like a magician and performer would. Don’t blink!

Well okay, I tried but I can’t choose a favorite. Our new character who is going to show up in season 1 was probably the most fun to develop. She has such a unique ability set out of all of our existing characters and DEFINITELY has the most adorable rockets! I am so excited for everyone to meet her! 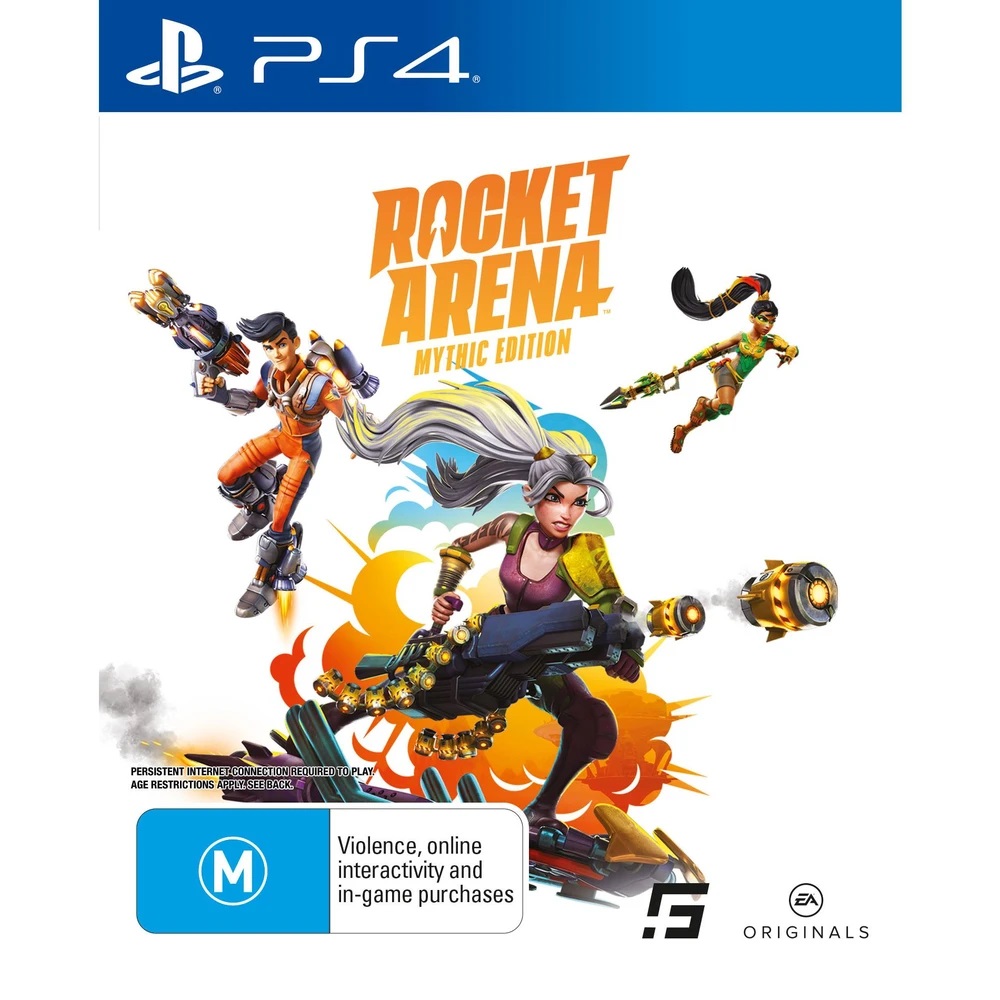 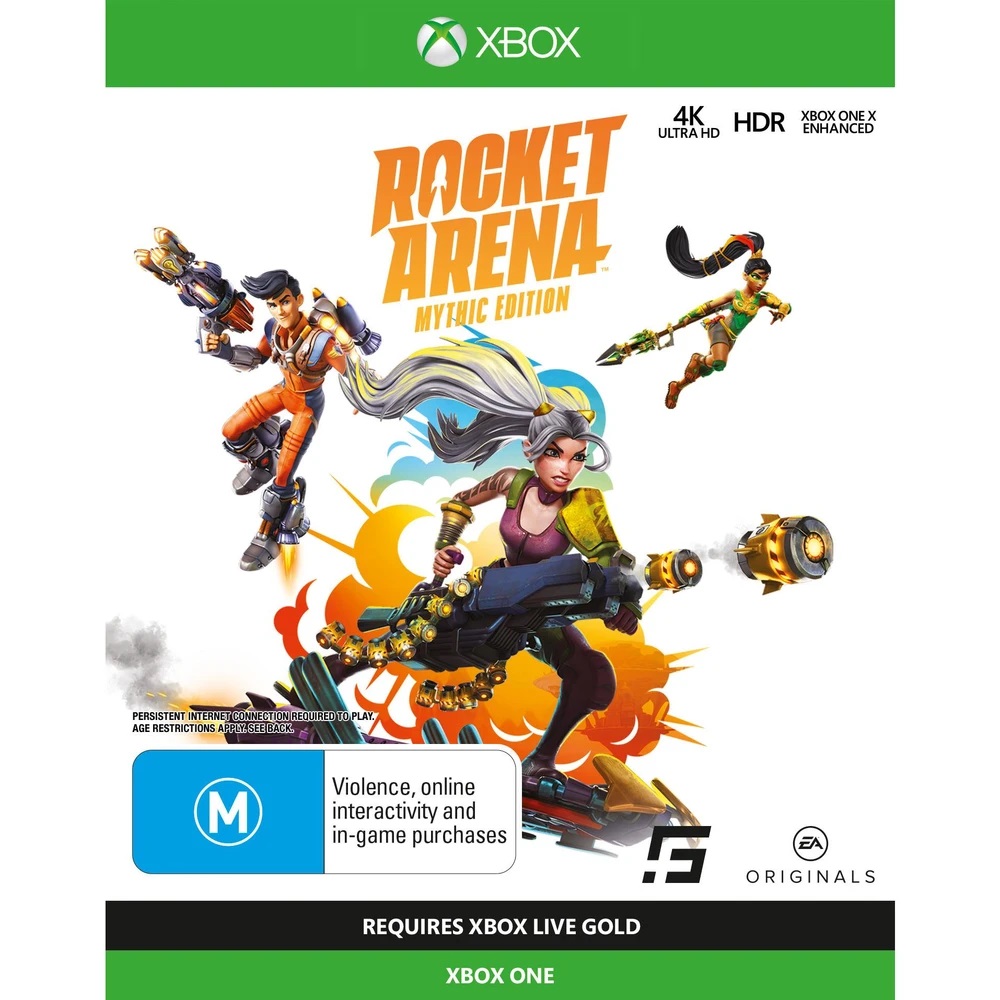