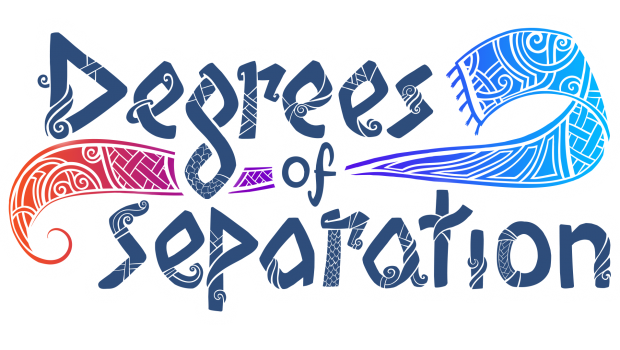 Summary: Degrees of Separation is a challenging 2D puzzle-platformer with a unique core gameplay premise.

2D Puzzle-platforming games have dominated the indie game scene for a number of years now and much to my naivety, I was beginning to think that I had seen everything the genre had to offer. Then along comes Degrees of Separation, a devilishly difficult puzzle-platformer with a unique screen-splitting premise that sat me back down and took me to puzzle school. 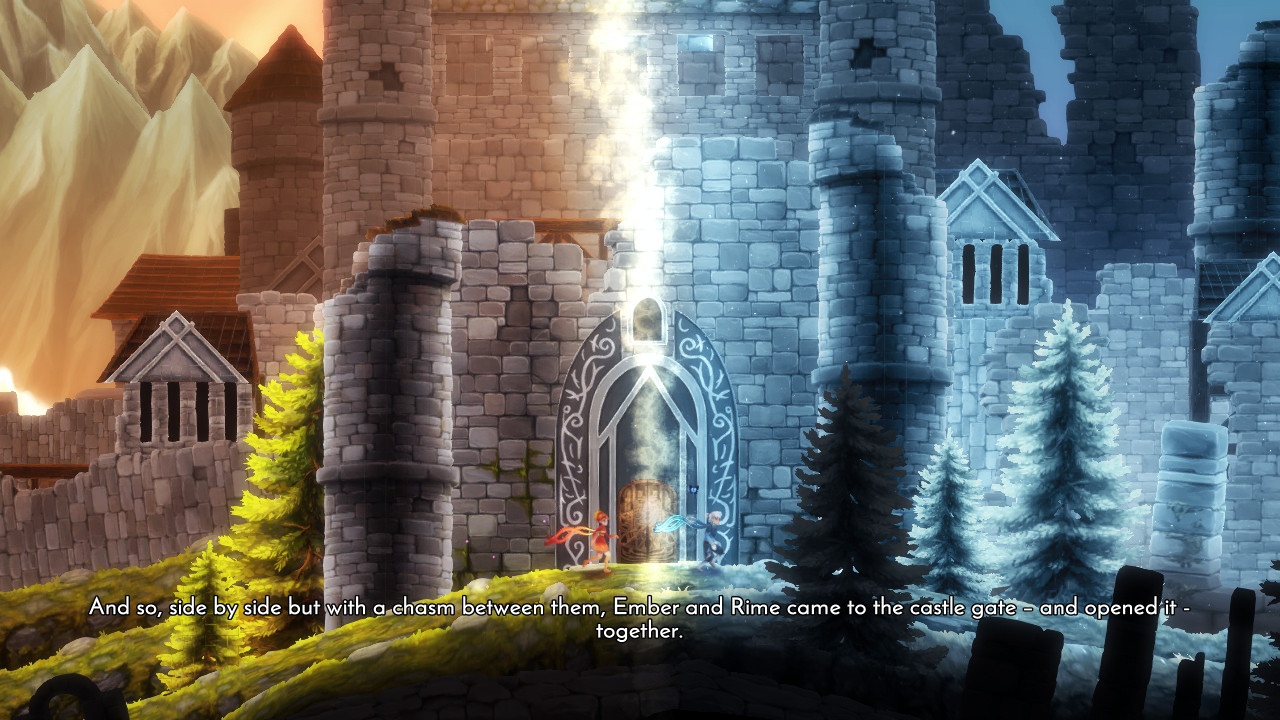 Degrees of Separation is a 2D puzzle-platformer that follows the adventure of Rime, a prince imbued with the power of ice, and Ember a solitary heroine imbued with fire. The pair are drawn together by an unknown calling and must work together to explore the mystery of an ancient castle and the various magical lands it links to. 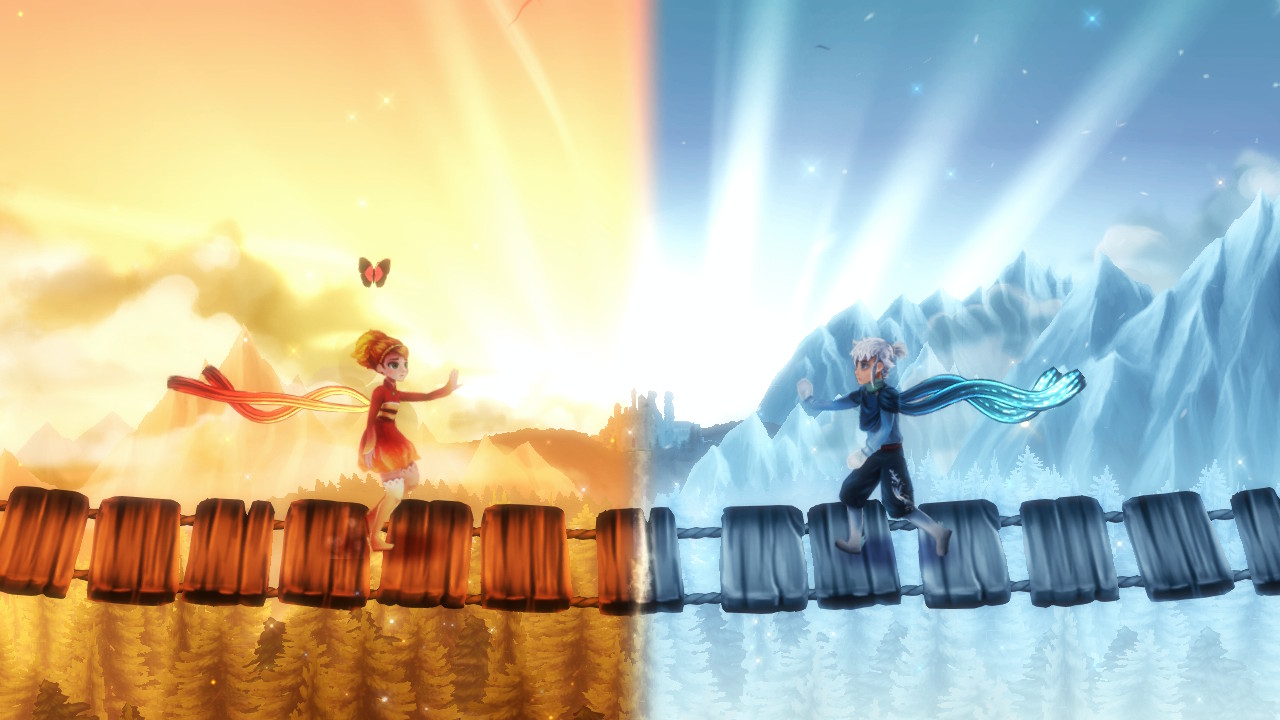 Each character emanates their respective elemental power, which causes their mere presence to affect the world around them. Lakes freeze underfoot for Rime and geysers of steam burst from the earth in Ember’s presence. Both characters are on the screen at the same time and at the exact middle point of where these two forces of hot and cold meet, a magical barrier physically separates the two heroes, which results in Rime’s side of the screen being filled with ice and cold, while Ember’s side of the screen remains warm and bright. This magical barrier is dynamic and shifts around with the character’s position, so if Ember is on a platform above Rime, the screen will be divided horizontally with the top half of the screen red and the bottom half blue – whereas if the pair are standing next to each other, the screen will be split vertically down the middle. 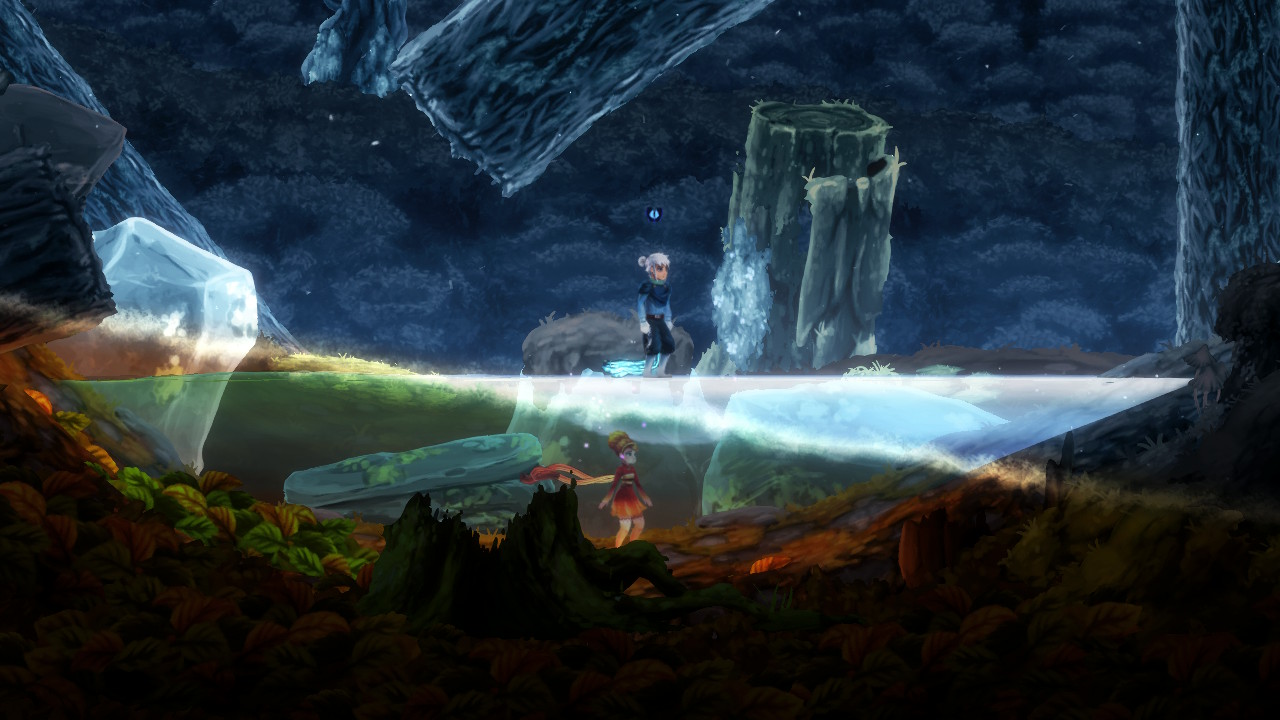 Managing the position of each character and utilising this barrier to affect different elements in the world is the key to solving the game’s puzzles. Each character can be controlled individually (or by two separate players in local co-op mode), or can be instructed to wait or follow at the tap of a button. So for example, Rime may be required to walk across a frozen body of water in order to jump up to an elevator, which is activated by lighting a lamp. The player will need to position Ember to ensure that the lamp remains in Rime’s icy presence until he has reached the elevator, at which point Ember can be moved closer to the lamp so that her warmth affects the lamp and raises the elevator. 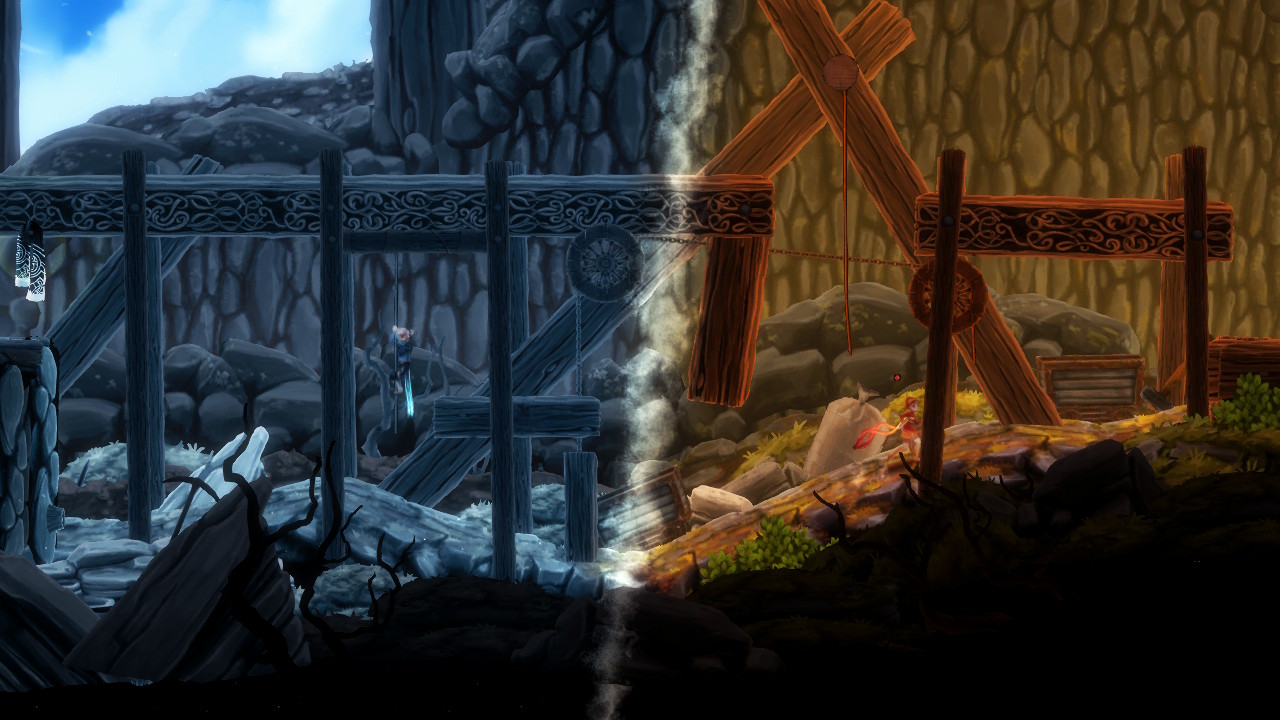 The goal of each puzzle in Degrees of Separation is to collect the ancient scarf located at the puzzle’s end. These scarves are used to unlock new worlds and areas to explore. Unlocking new worlds generally requires a large amount of collected scarves, so even though you can always bypass a puzzle that is too difficult, skip too many and you won’t have enough scarves collected to be able to progress through to the next world. 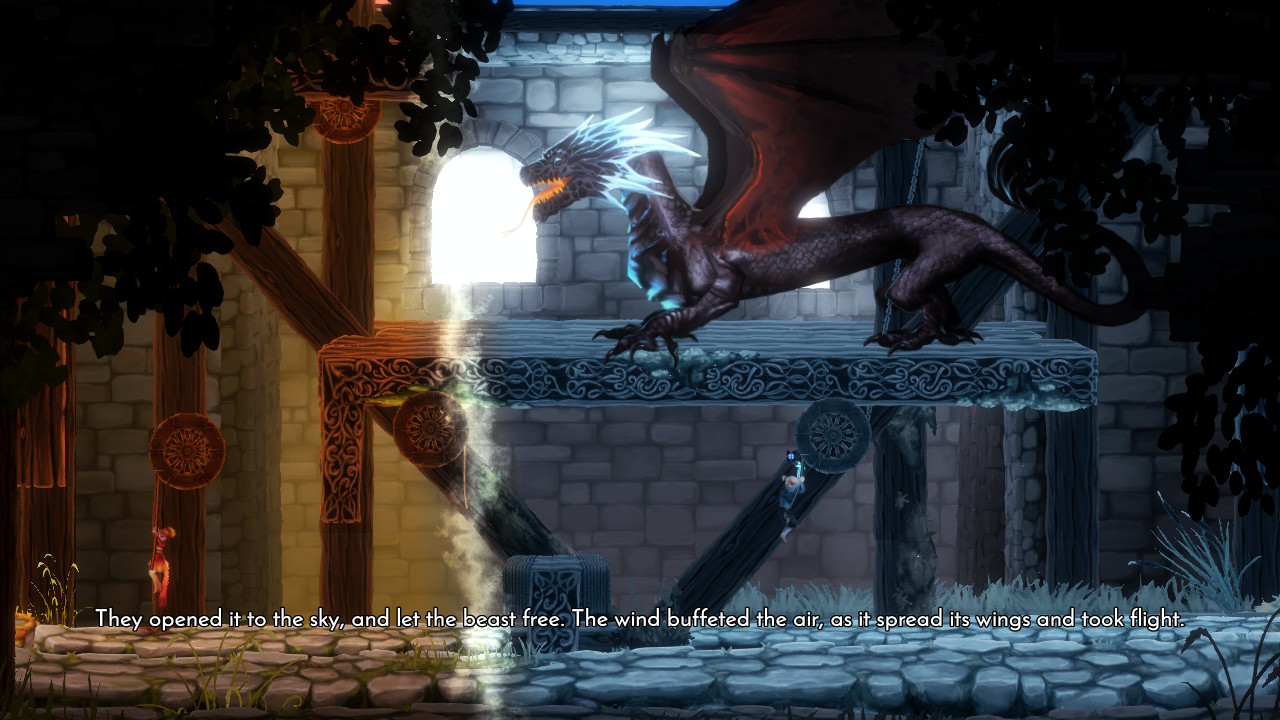 The high number of scarves required to progress through to the next area is somewhat frustrating, because the puzzle design in Degrees of Separation is deceptively challenging. Perhaps it’s the unique concept of puzzle gameplay, but the seemingly simple screen-sharing mechanic combined with the platforming sections wrung every bit of processing power from my brain, and I found myself shamefully giving up and skipping to the next puzzle far too often. The scarf requirements become particularly painful in later sections, as new worlds introduce unique character abilities and gameplay mechanics that really test your puzzle-solving skills, which makes it even harder to progress if you’re already struggling with the puzzles. 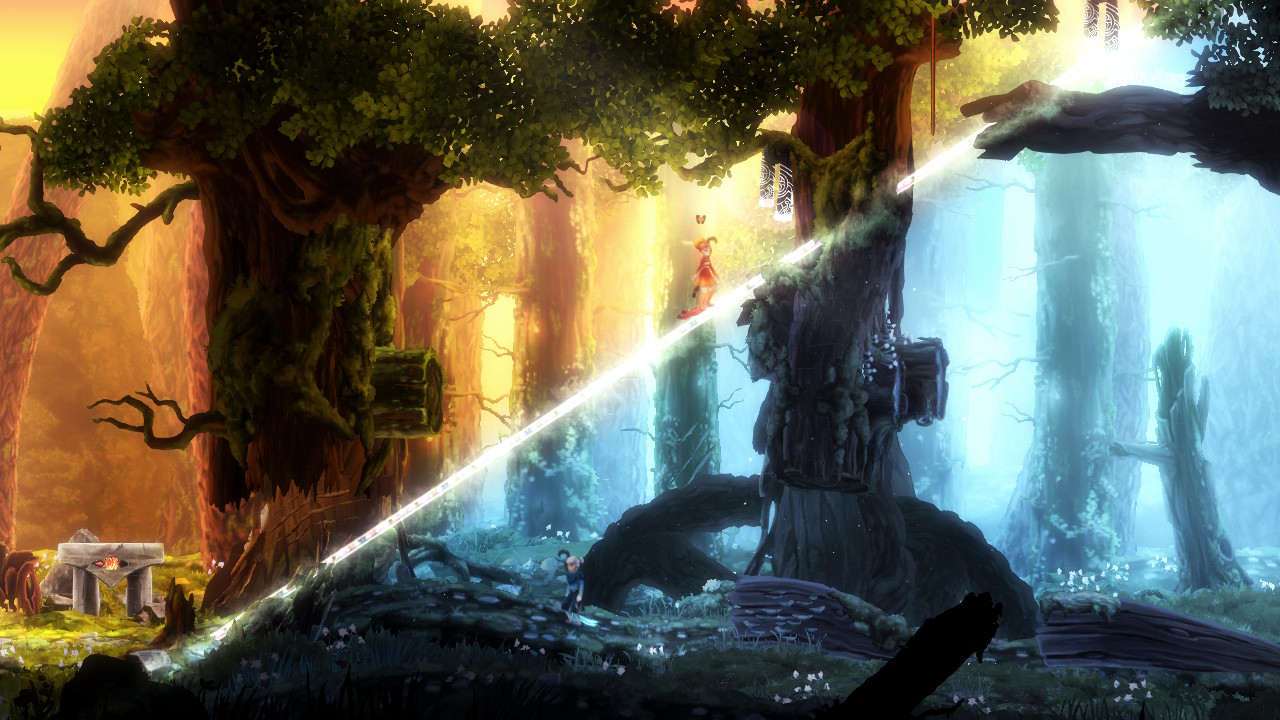 Despite the somewhat generic story framework, there’s a surprising amount of character development and world building that takes place over the course of your adventure in Degrees of Separation. With each puzzle solved and scarf collected, a fully voice-acted narrator delivers a short monologue revealing some insight into the characters or world related to the puzzle that was completed. The voice acting is top-notch and each little piece of information gradually builds into a wealth of narrative that makes you feel invested in the characters and their interpersonal story arc. 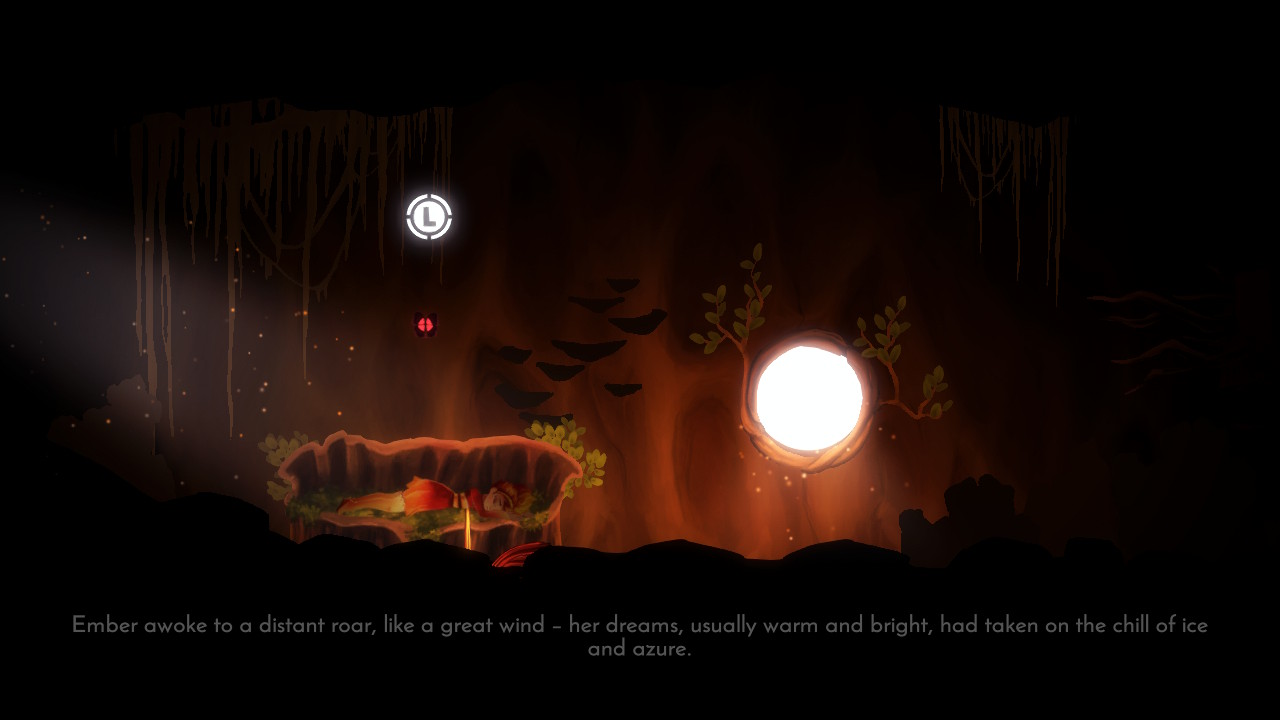 The levels and backgrounds in Degrees of Separation have been created using a gorgeous painterly art style to produce highly detailed, layered, fantastical set pieces with distinct features and atmospheric qualities. Watching the golden barrier dance around the screen as the two characters complete platforming puzzles and seeing how the world shifts from hot to cold is genuinely mesmerising to watch. 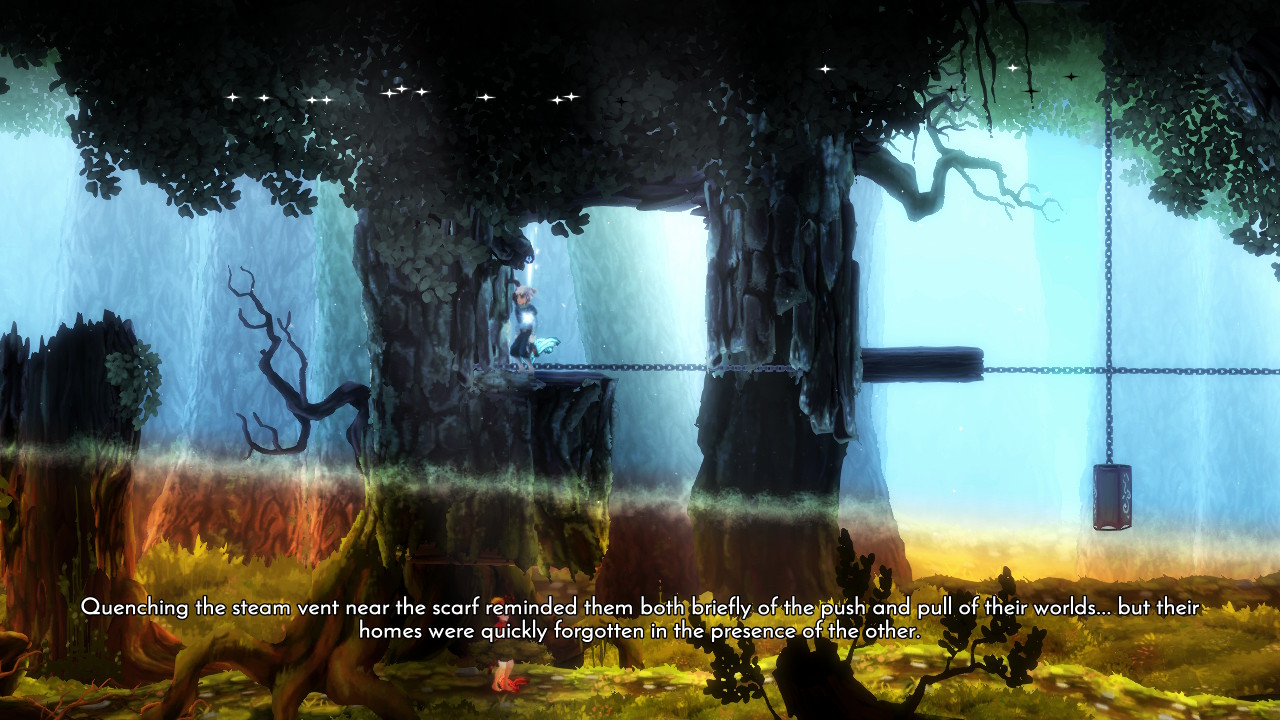 Unfortunately, the characters themselves stand out like a sore thumb against these beautiful backgrounds due to their limited animation and underwhelming design. The art design of both Rime and Ember is uninspired to say the least, but the animation of the characters movement and actions is distractingly poor. Both characters look oddly rigid and lifeless as they run and jump around the world, which unfortunately only became increasingly distracting as I spent more time with the game. 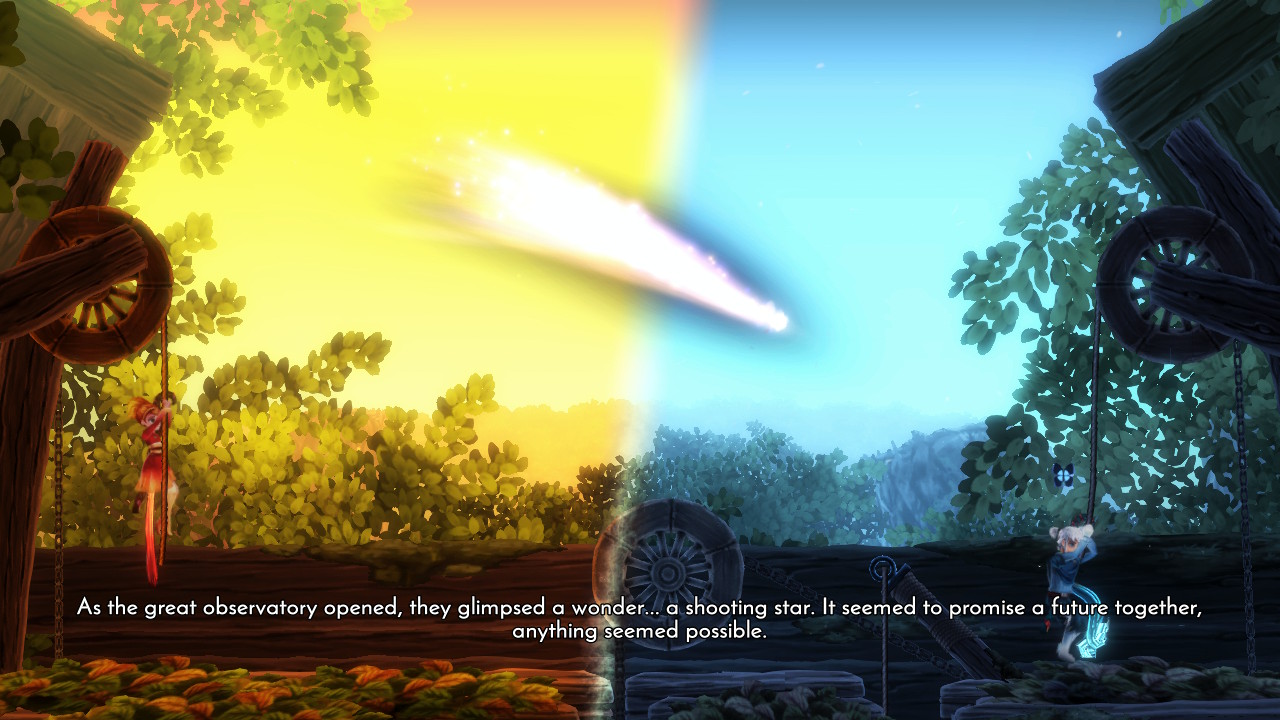 I also frequently found myself getting lost in the world of Degrees of Separation, particularly in the main castle hub world. There is no map to rely on, so you’ll need to use the fast travel network to help guide you throughout the world. It’s also quite difficult to track down the last remaining scarves that you may have missed in an area – when you’re inside the zone you can only see which scarves you’ve missed when you collect a new one, so be prepared to wander aimlessly through the world for quite some time if you plan on completing all the puzzles. 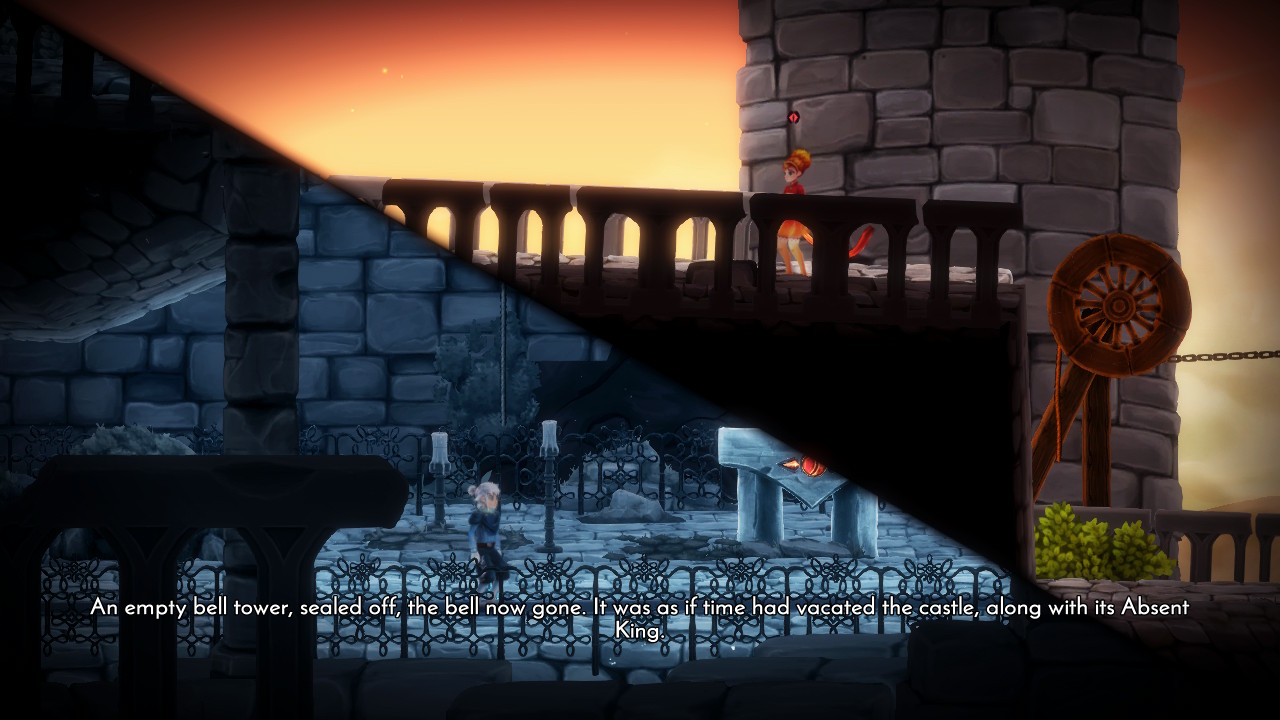 Despite some odd character animations and a few absent quality of life features, I quite enjoyed my time with Degrees of Separation. Its unique elemental-duality puzzle mechanics forced me to think outside the box, and I found myself surprisingly compelled by the character’s relationship development. There may not be enough puzzle variety to satisfy all 2D puzzle-platformer connoisseur’s, but there’s plenty of interesting material here to warrant the modest cost of entry. 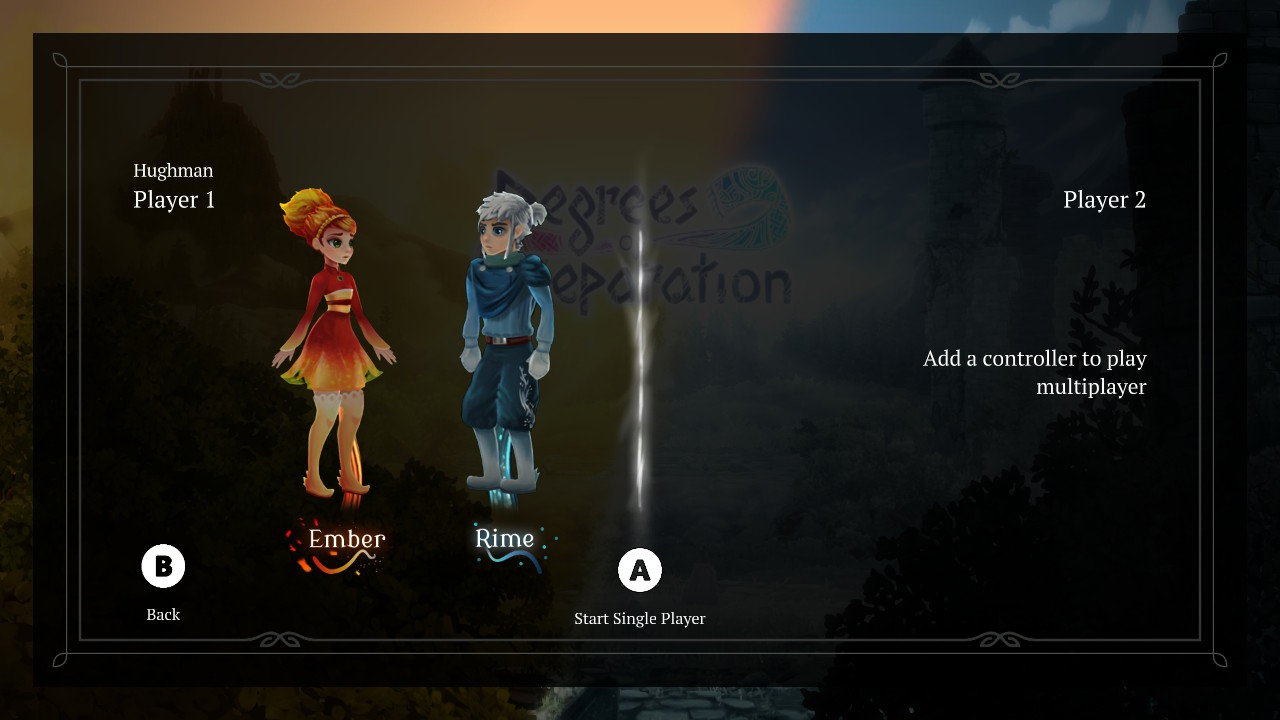