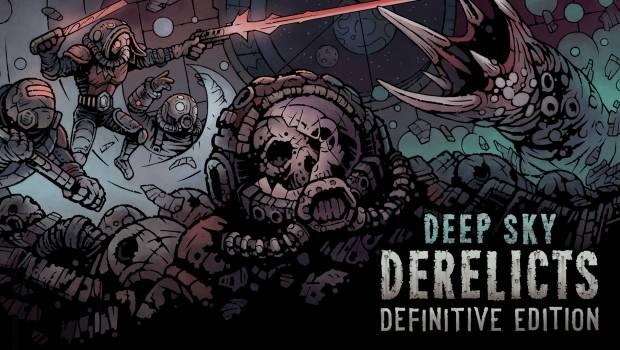 Summary: Scavenge the galaxy, loot derelicts and level up your team to tackle bigger and nastier enemies.

I love Sci-Fi, give me Bladerunner, Alien, Star Wars any day of the week. I also love RPG games, being able to develop my characters, unlocking the next level of skills to make the subsequent battle easier… before the challenge ramps up again. Deep Sky Derelicts throws you into a world that grabs those two loves and mixes in some tactical card combat action and retro-futuristic comic aesthetic and it’s quite a bit of fun.

You start out being tasked with tracking down data that when combined will lead to a Mothership. Your first forays into foraging aren’t too taxing, effectively just getting you used to the mechanics and how the world works. But as you progress and unlock more derelicts, your enemy get tougher and tougher. You only have three characters in your team and you could well end up facing far more than that, but you do have the chance to give your team equipment that might enable them to bring in some robotic help during battle to even the numbers a little. 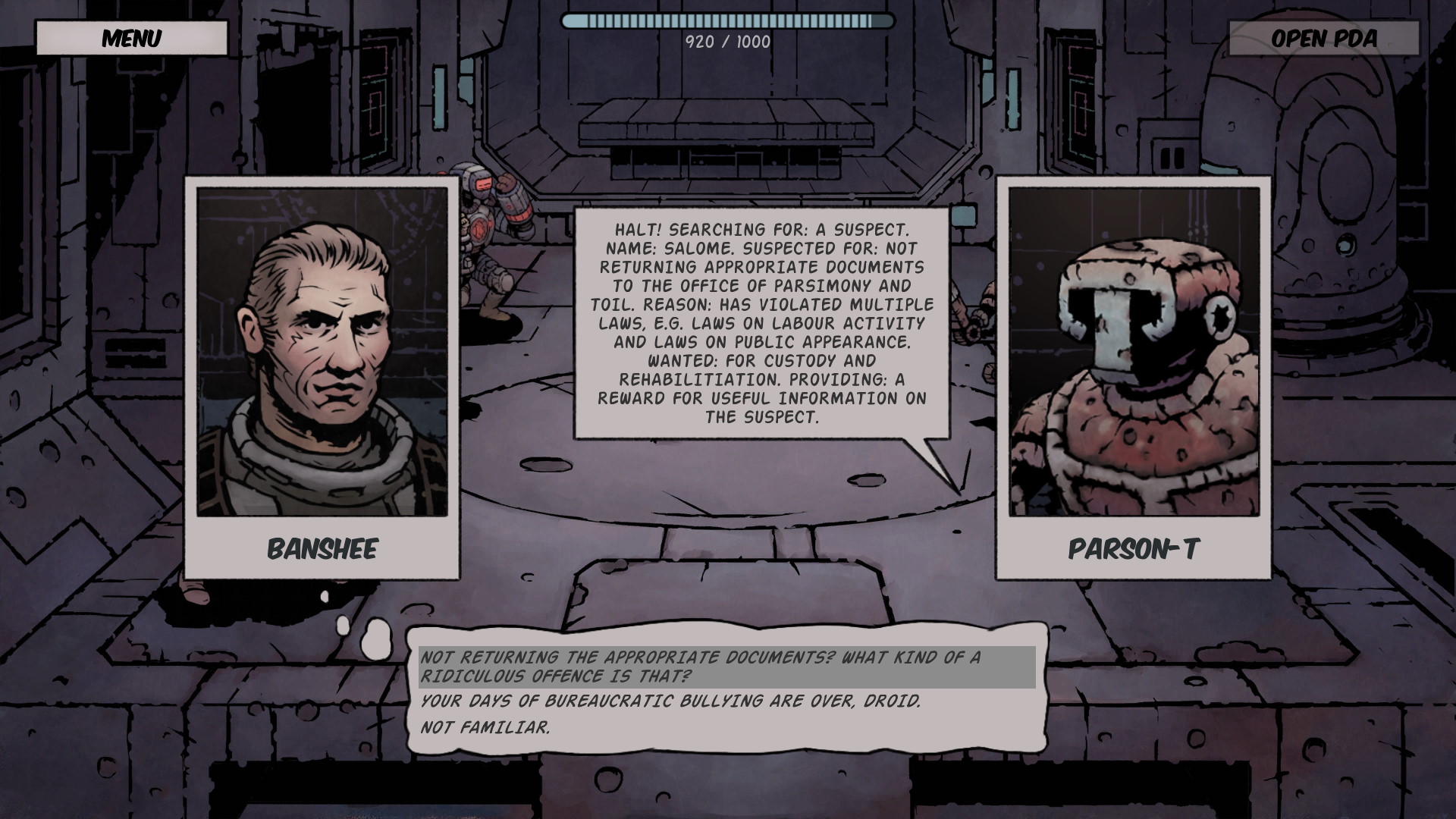 The equipment, a large part of the RPG element, is where a lot of the make or break happens. Some equipment come with cards, or combinations of cards, that will form part of your deck that could show up during battle. By selecting the best equipment for your play style, you will ensure that the cards you have to play from are going to give you the best chance of winning. Loading your team with someone who can heal, refill shields or leech health from the enemy can be the difference between success and defeat. 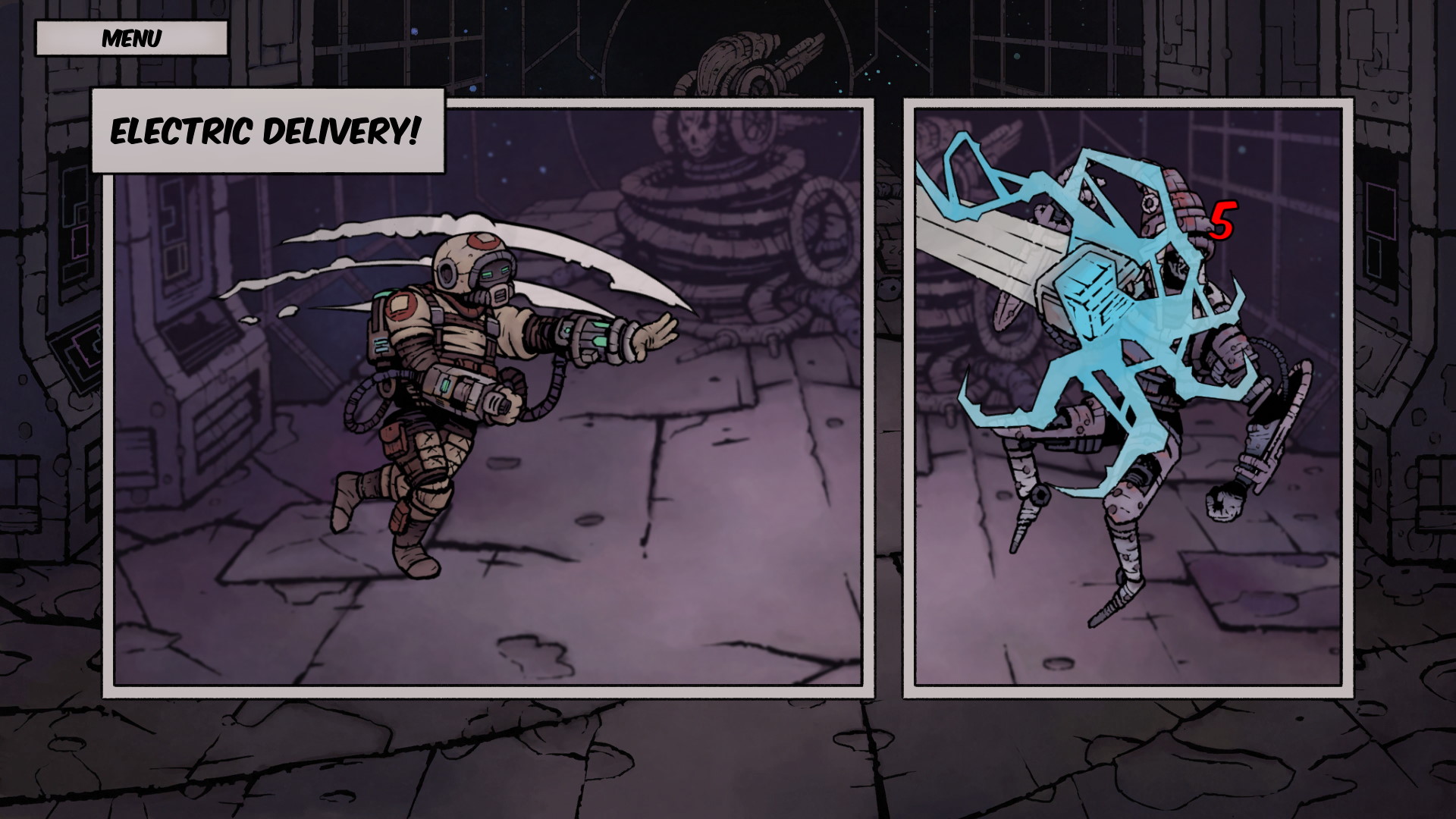 That RPG element is also what I’m a sucker for… not just enhancing my characters but that ever increasing power of loot that you encounter, the “just one more battle or scavenge to see what I can add to my team” is an enticing carrot dangling in front of you. But there are some issues. 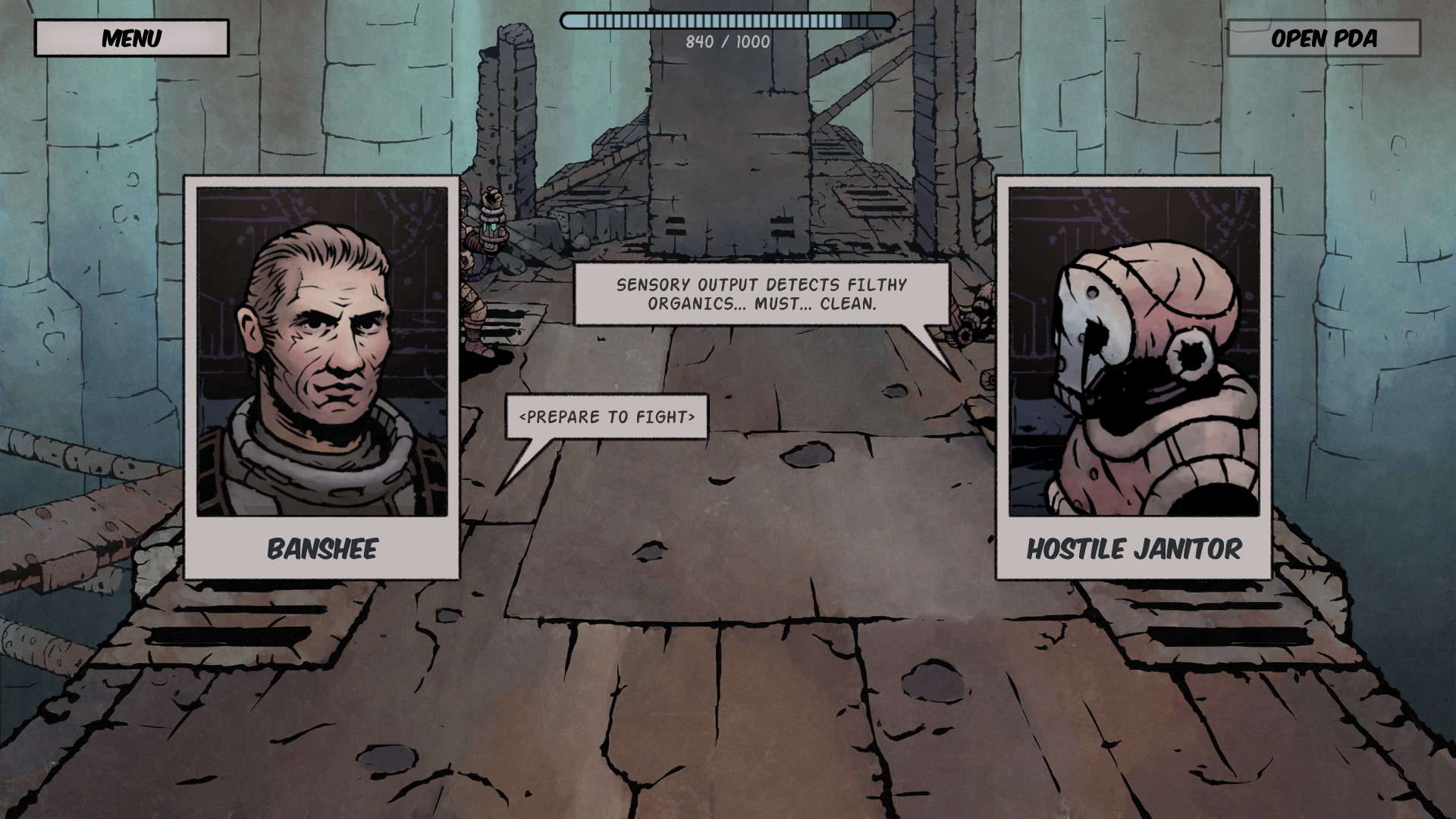 My first and main issue is with the enemy selection, by that I mean how you select which enemy you will attack. I do need to note that you can click on their “thumbnail” in the bottom corner but I tend to just want to click on the enemy as it’s represented standing directly across from my team member, unfortunately because of the various sizes of the enemies and the fact they tend to bob about… you can sometimes find your selection switching from the one your cursor was over, to one further back or further forward. Selecting the wrong enemy can cost the battle as you may be attempting to focus all attacks on a given enemy, or you may have a time limited removal of an enemies shields so all hits matter more than usual. It’s possibly a small issue but it’s there, as I said, you can just select their picture from the lower corner of the screen… but for me that just felt less natural. 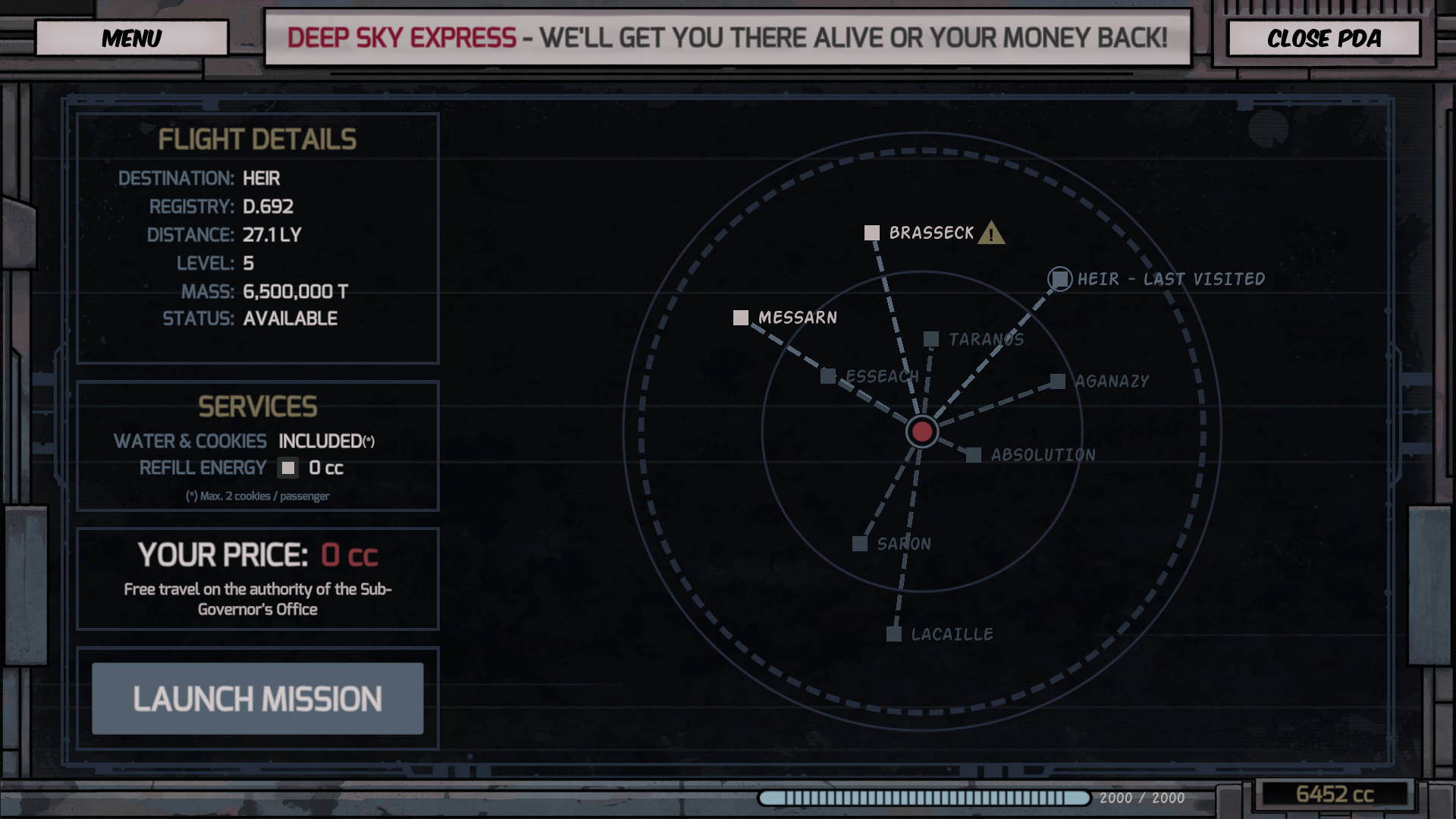 My next issue I want to put a little caveat on, I may have missed some instruction or skipped something, but I found it quite frustrating in battle when my team members would suddenly seem to skip their turn, there are two ways this can happen (as I figured through going through it enough times), either the enemy has put a modifier on your team member and forced them to miss their turn… or if you access your extra card options but don’t choose anything… you loose your turn. I managed to fumble along all the same… but it would have been nice to be informed of this before hand. 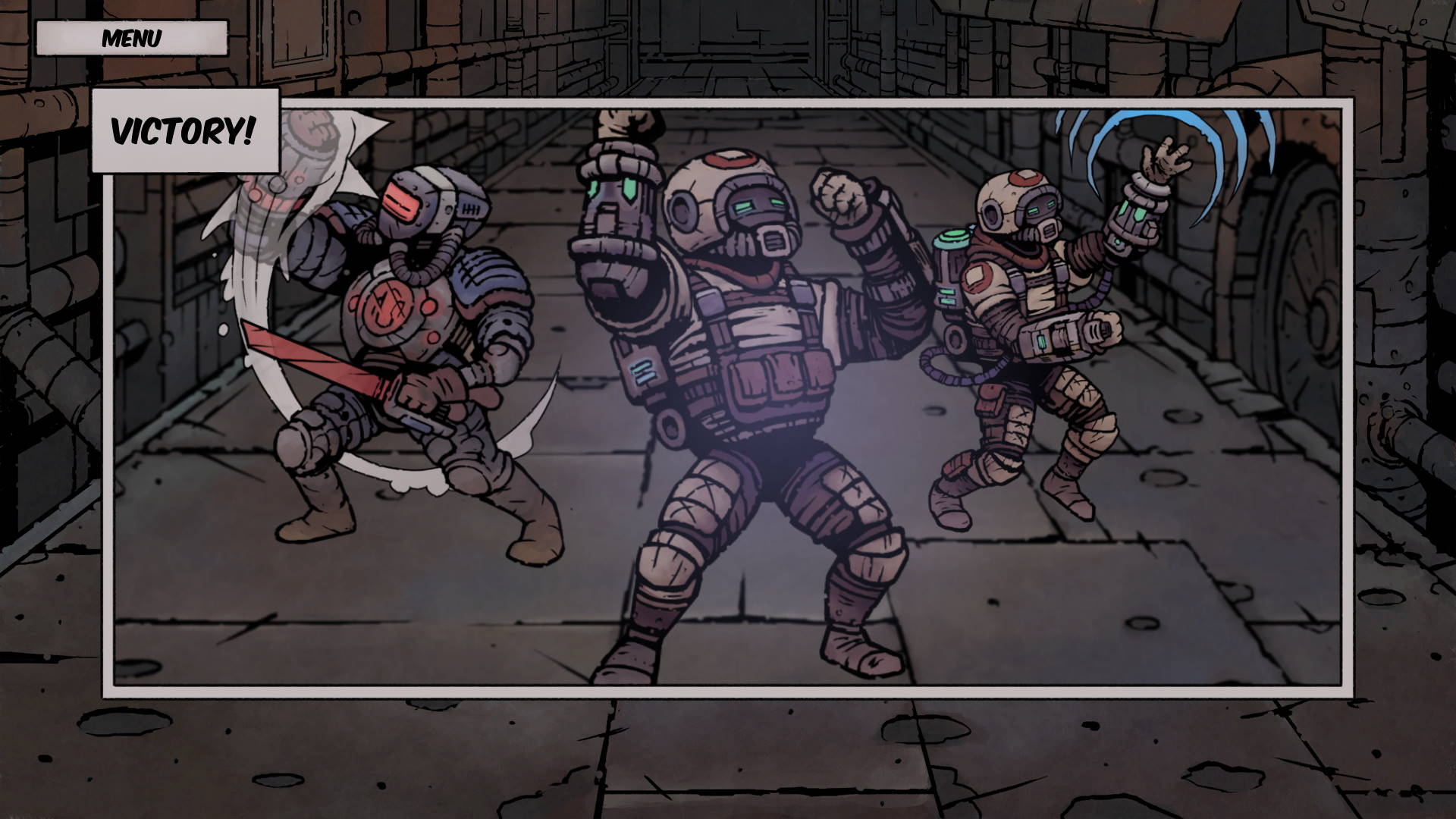 Overall it’s a fun game and a great way to pass the time. It’s not overly violent (well I mean you are killing creatures, robots etc… but it’s all in comic book style art so it doesn’t come across as gory) so you can play it with younger eyes about (something far more likely to be the case with the current pandemic).

It’s pretty decent value too when you consider the replayability of different character types with different strengths and weaknesses and different play options outside the main storyline. If you like RPG’s, roguelikes, tactical card battle games there’s a good chance you will enjoy this.