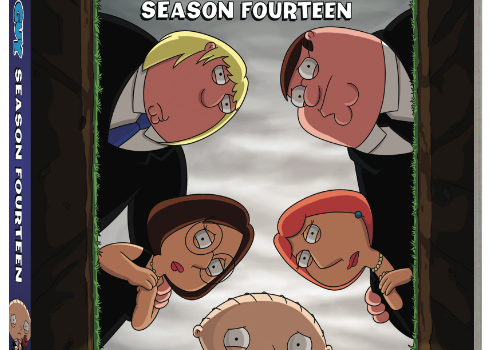 A death, a trip and a love triangle – get ready for Family Guy Season 14 available on DVD 10 December

The Griffins are back ruder, cruder and funnier than ever before with the release of Family Guy Season 14 on DVD on 10 December 2014. Season 14 is a collection of 21 uncensored episodes and hours of hilarious special feature content from Twentieth Century Fox Home Entertainment.

Just in time for Christmas, Family Guy Season 14 is the must-have DVD for ‘Him’ and anyone who enjoys a good laugh. This season is not to be missed as fans prepare to say goodbye to one of their favourite characters…well sort of. In the episode titled “Life of Brian” the Griffins mourn the tragic death of their beloved mutt, not long after Brian’s death the Griffins welcome new comer Vinny.

Other moments not to be missed this season include the Griffins unforgettable trip to Italy, Peter’s discovery that he has a vestigial twin growing out of his neck, the love triangle that emerges between Stewie, Brian and Stewie’s teddy bear, Rupert, Stewie being reborn into a wealthy British Household and Peter and deviant neighbour Quagmire become a singing/songwriting team.