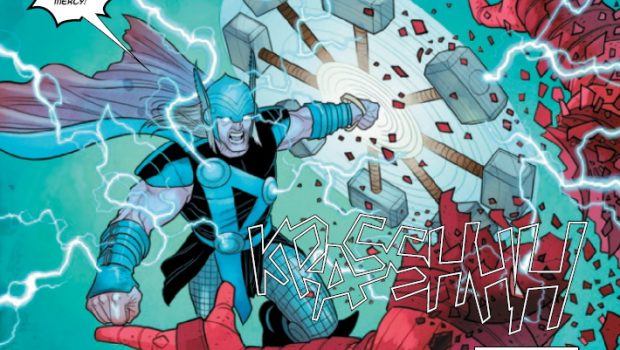 Following on from the events of the Death of Dr Strange where he managed to squirrel away a younger version of himself in case of emergency the Avengers are fighting an attack from Juggernaut type creatures from a pocket dimension. Iron Man goes into a portal with a nuke that some others had bought in themselves and finds the truth.

Another one where it would help to know what happened before, but in this case they explain enough of it for you to understand what is going on. Tony Stark is in the shower after some sort of unspeakable interdimensional horrors breached his suit and  has a new command to instantly escape. Even Thor is bummed out about losing a battle they had with the new threat attacking earth.

This is really two stories with the other Avengers attacking what they think is the threat and Iron Man off on his own adventure. It does set up the ending well to continue the adventure.

How much you will enjoy this one depends on how much you like these characters and your commitment to buying multiple comic titles to complete the series. As happens a lot with Marvel crossover characters the stories can go over many different issues and the main storyline comic series.

If you have been reading this series I would recommend it or even just having a look at this one if you had not heard about it before.