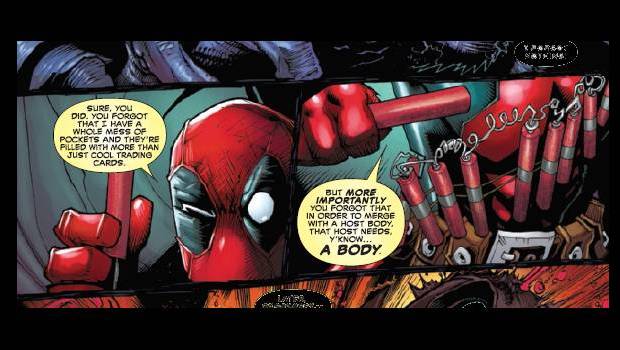 Summary: Worth it for fans of Deadpool, everyone else maybe have a look first.

Deadpool in the Bone Zone

Once again Deadpool is in amongst it in the Bone Beast Realm after being tricked by Elsa Bloodstone into going in to rescue some kids and kill the queen of the Bone Beasts, only to find it was to have the Queen use him as a host.

This is another story where it is a big benefit where you have read the previous parts of this series. There is a short explanation at the start but it doesn’t really tell you why you should care about these characters and what the Bloodstone is about.

Some interesting art and character designs in this one. Jeff the baby shark with the knife mouth is my favourite. I am 100% sure that baby shark thing is on purpose.

There is a lot of backstory to this character and I am sure the things mentioned in the story are important but I could not work them out at all.

I would recommend this one more to people who are already fans of Deadpool and have been following the series as it is a bit confusing to come into the series at this point.