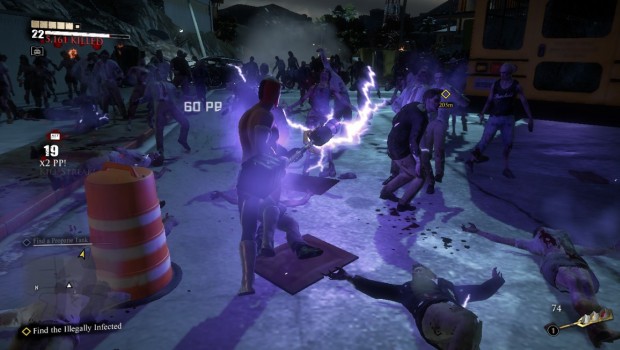 Dead Rising 3 has something of an identity crisis. Like its predecessors, Dead Rising 3 wants you to destroy zombies in violent and hilarious ways with a wide range of improvised weapons. This seems to be an even greater focus in DR3, with hero Nick Ramos able to create combo weapons and vehicles absolutely anywhere. Safe houses contain lockers, where Nick can access every item he has ever touched. With a large sandbox full of respawning zombies and hundreds of collectibles, you’d be forgiven for thinking that exploring Los Perdidos and being a badass zombie slayer were the focal points. 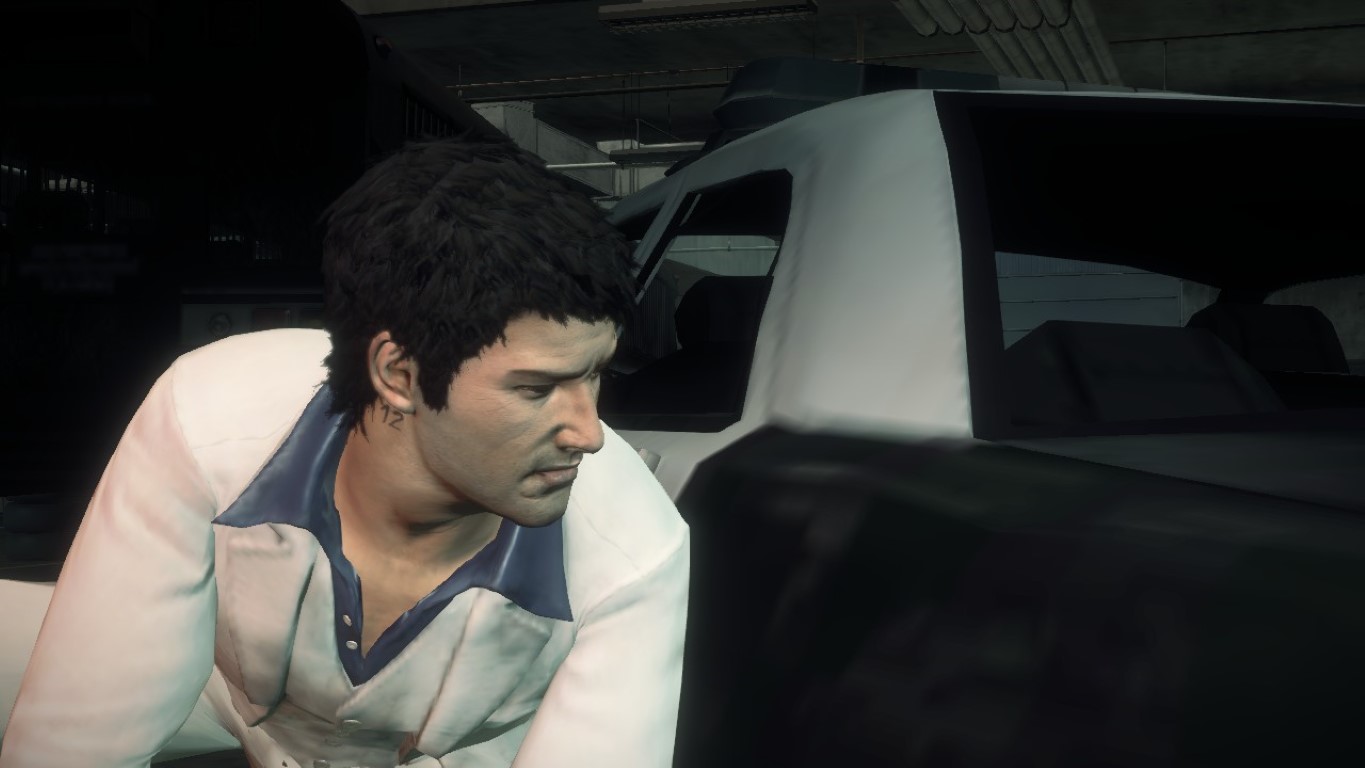 The action-sandbox element is partially overshadowed by DR3’s time management feature. Side missions have a limited window of opportunity, and the main story is built around one big doomsday clock. Spending hours just killing zombies or exploring is therefore negligent and ill-advised. Fortunately, DR3 is more forgiving in this regard than the previous games—there are fewer survivors to rescue and psychopaths to kill, and the main story missions are limited only by the overarching timer, not by countdowns of their own. But while this gives players plenty of time to complete everything, so long as they prioritise side missions and don’t waste too much time zombie hunting, it does make DR3 feel emptier than the previous games. Nightmare mode counters this by making the zombies harder and the timeline shorter, but it would have been nice for the main mode to have been a comfortable challenge instead of a breeze. 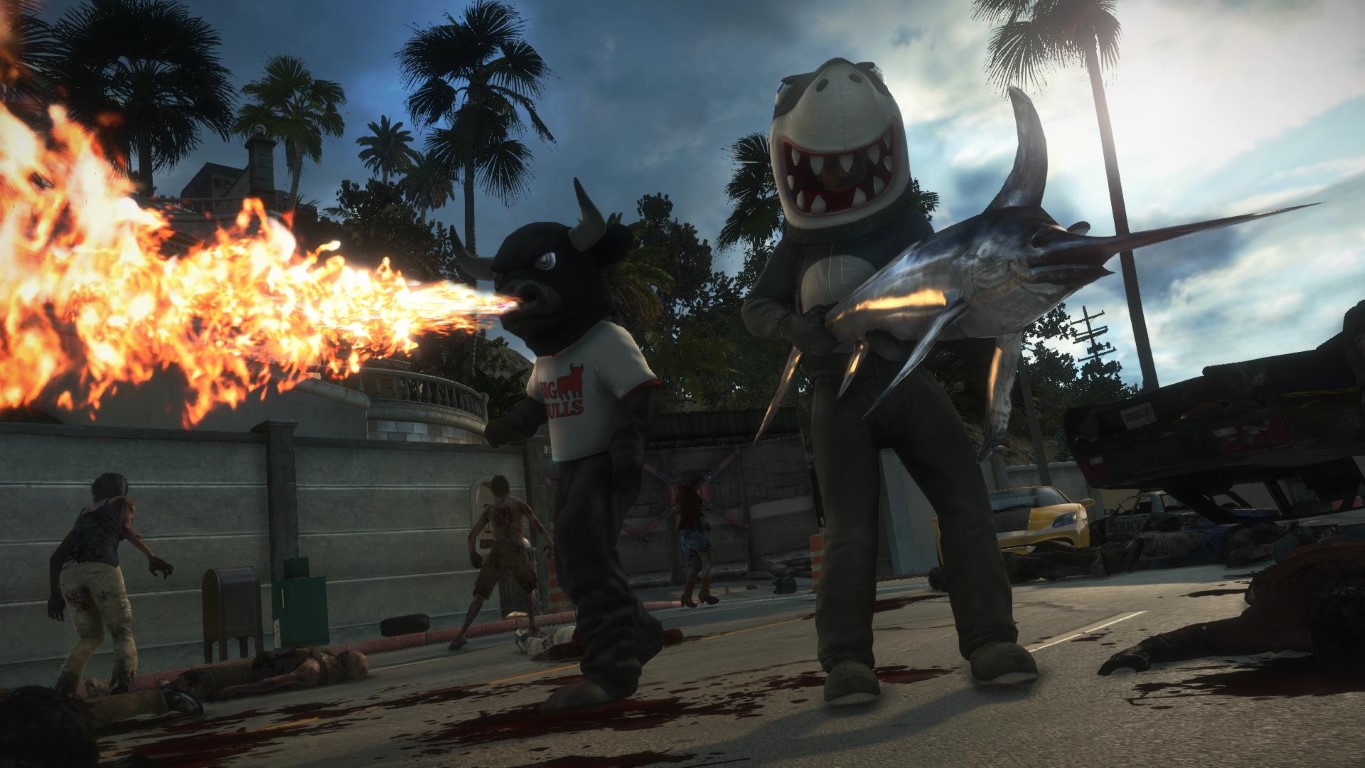 The writing is where Dead Rising 3’s identity crisis is most evident. That the serious threat of a bomb being dropped on Los Perdidos could be countered by a guy in a kid’s superhero outfit wielding a traffic cone is bizarre enough, but DR3 has one of the most tonally inconsistent elements I’ve ever seen in videogames. One type of ‘collectible’ is tragic endings, set pieces of humans who haven’t survived the outbreak. These are typically quite evocative, with dead couples holding hands or remnants of the people’s failed survival attempts strewn around them. But these emotional moments, punctuated by sad sound effects, are also accompanied by horrifically inappropriate puns. The first two Dead Rising games wholeheartedly embraced the ridiculousness and comedic tone; DR3 tries to take itself seriously, but the remnants of that comedic approach undermine any chance of a mature narrative. 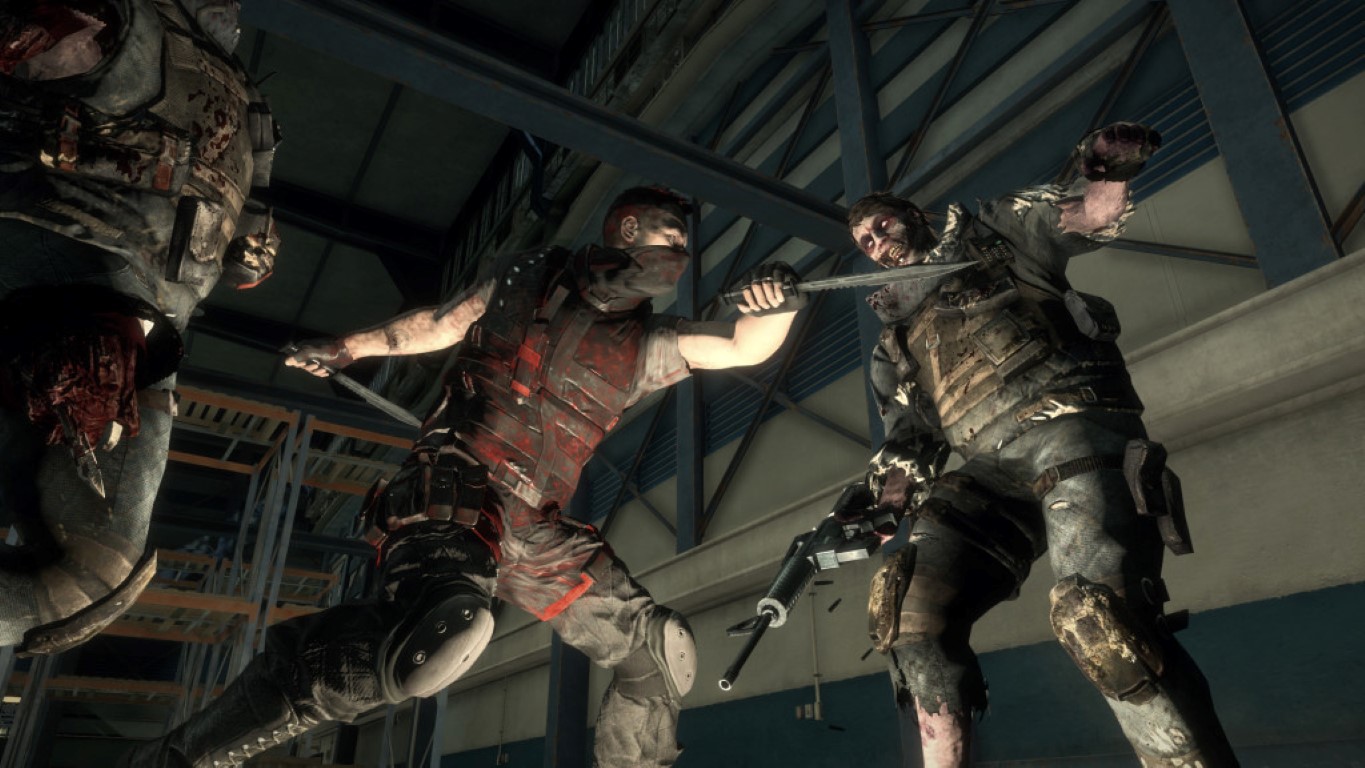 The Untold Stories DLC, which is built into the PC ‘Apocalypse’ edition, actually attempts far more mature storytelling. Each of the four chapters stars a different character, including a special ops commander and the biker gang leader, among others. It’s wonderful to see the events of the main storyline explored from different angles and to see some mysteries be resolved. But DR3 is characterised by its indecision, and these side stories are no different. Each character is basically a re-skin of Nick—they have all of his skills, including being able to create combo vehicles, and can find his collectibles as well as their own in the same very same sandbox. 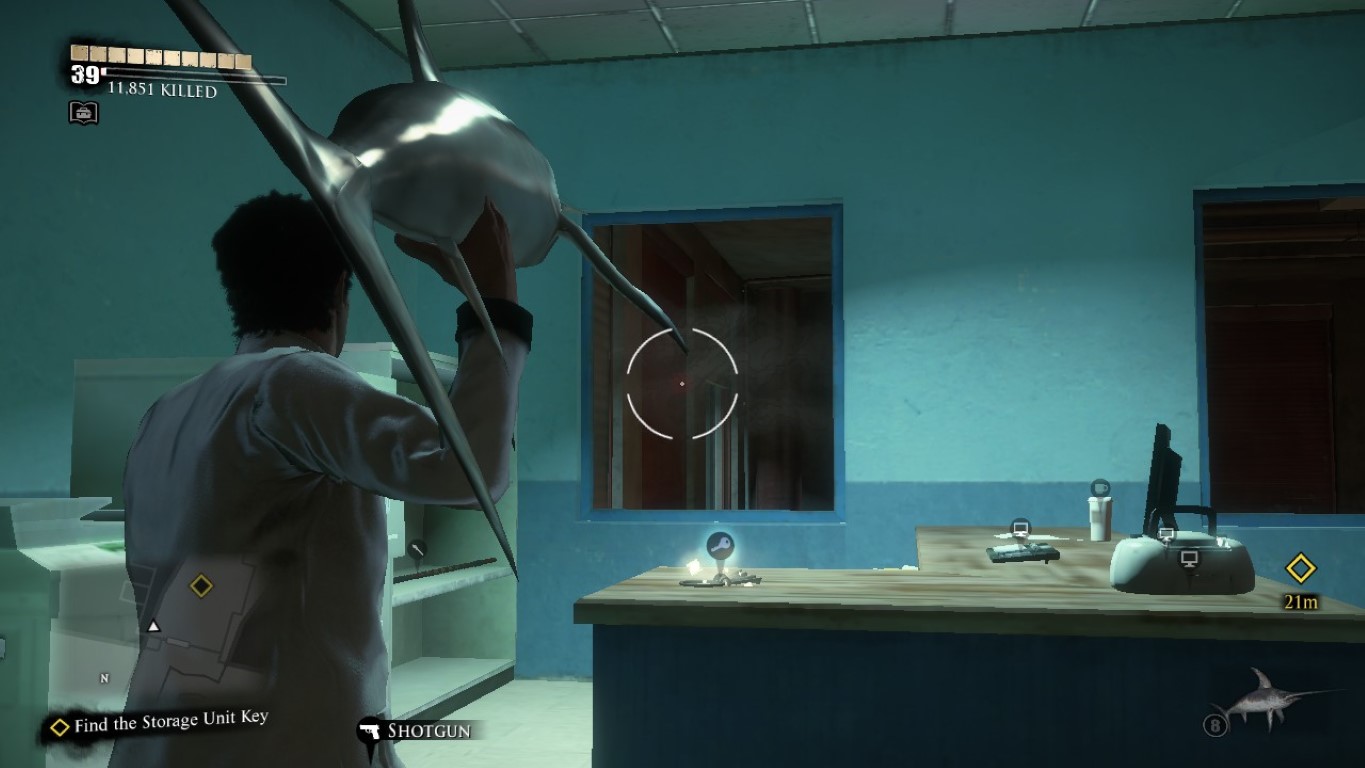 I would have preferred a tighter package for these additional stories; the potential was there for Dead Rising 3 to really demonstrate its potential for clever and evocative storytelling. Instead, it seems like the silly zombie massacring aspect is really the core focus of Dead Rising 3, and everything else is an unimportant, experimental extra. 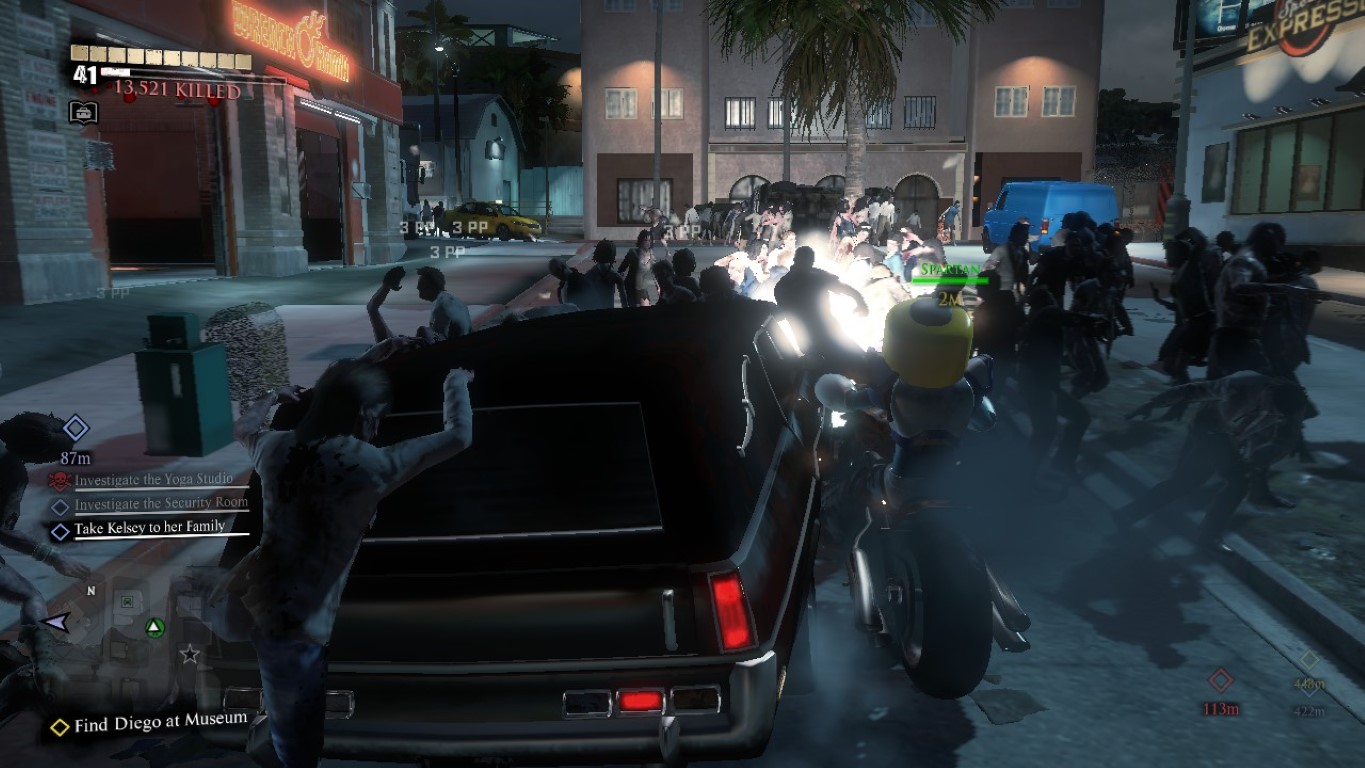 The co-op mode allows people to drop into your game and help out. This was mostly an enjoyable experience—I was gifted several awesome weapons by one fellow—but there seemed to be a drought of actual players. Out of four co-op experiences, two were with the same player, and one was with a player who wanted to ignore the side missions and was quite… immature in dealing with a certain psychopath named Dylan. I didn’t see any option to kick players from my game, which was—in that one instance—quite a disappointment, but a quit to menu is a simple solution. 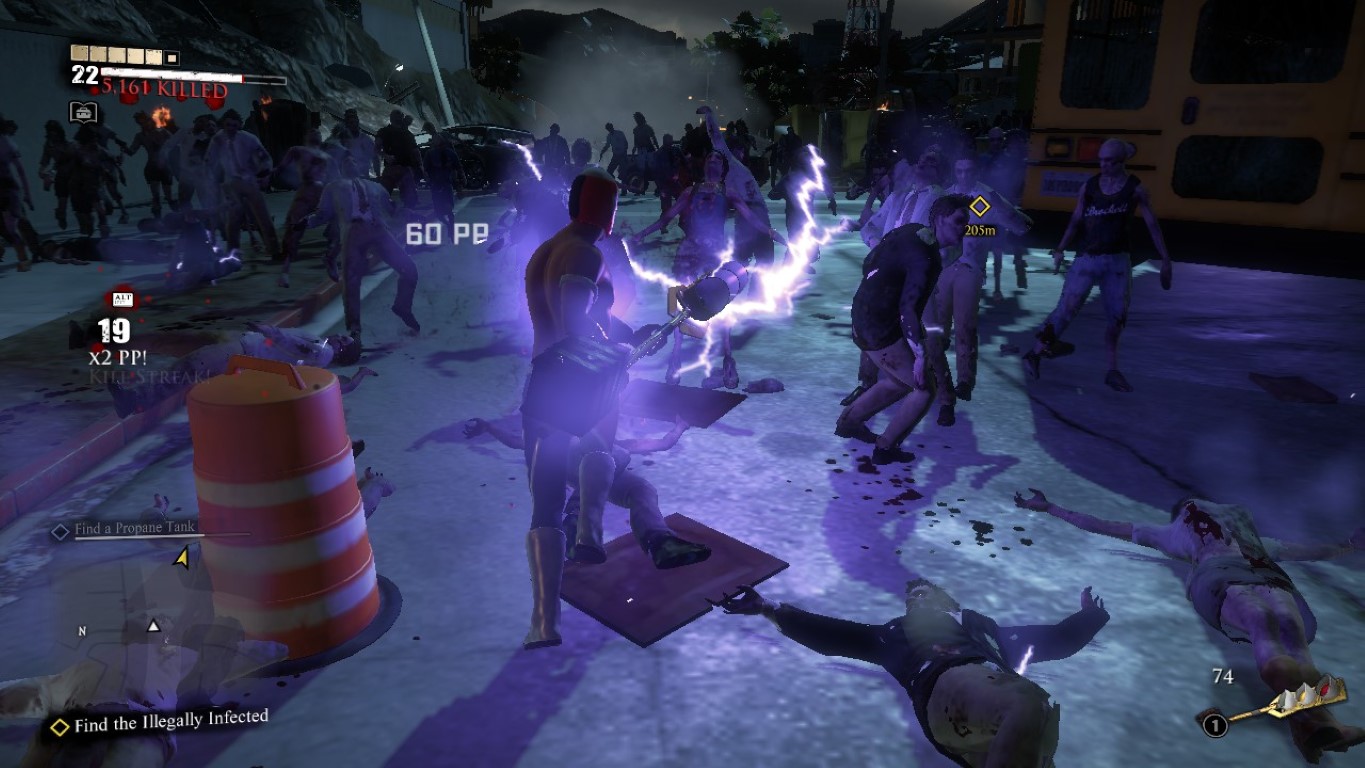 The unfortunate incompatibility with Nvidia graphics cards at release also dampened the experience significantly—it was a good two weeks before this problem was patched and I could play for more than five buggy minutes without a crash to desktop. 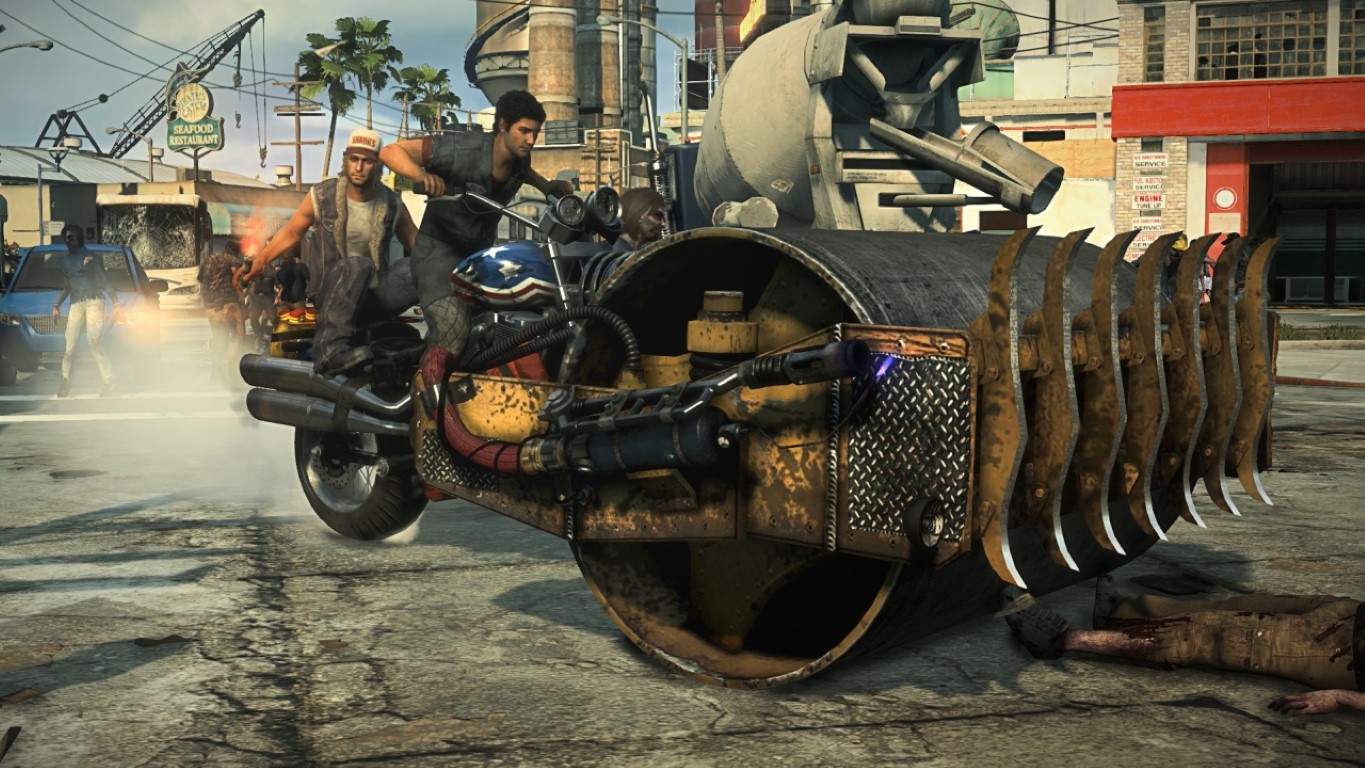 But none of these issues really stop Dead Rising 3 from being enjoyable. In the appropriate situations, the wacky humour is actually quite funny. Mowing down zombies in a flame-throwing steamroller-motorbike hybrid never—NEVER—gets old. Dressing up Nick in stupid outfits and using a jerry-rigged traffic cone as a megaphone to literally turn his shout into a weapon is also a cracking good time. It’s just disappointing to see Dead Rising 3 caught between two equally interesting premises. Telling a hard-hitting, evocative and mature zombie narrative requires full commitment to the cause; puns, silly outfits, and the ability to create a heavily armoured truck with a turret out of a steamroller, a sedan, and a portable welder all need to stay home. 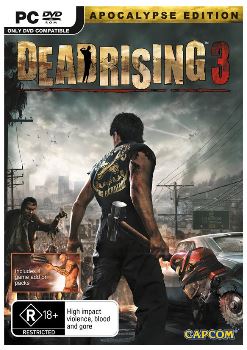 All the survival horror action comes to PC – Fully optimized to run at a high resolution, the PC release includes full Steam and game controller support

Hundreds of unique combo weapons and vehicles – Combine and customize hundreds of pieces found throughout the sandbox world including the gruesome Boom Cannon weapon or the Party Slapper vehicle.

Bonus Downloadable Content – All four of the “Untold Stories of Los Perdidos” downloadable add-on packs are now included. Each add-on chapter focuses on a different protagonist and gives players access to crazy new weapons and vehicles that carry over to the main game.