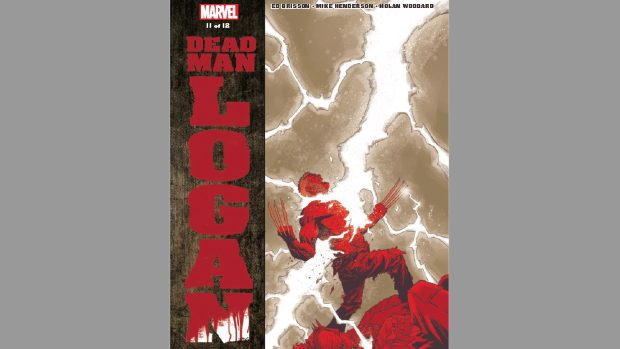 Summary: Logan continues to try and fight for good, despite failing health and reduced healing factor.

Transported from his own timeline in which villains triumphed, Logan used his second chance at life to rejoin the X-Men and to try and avert the horror that befell his world. Now back in his own timeline, Logan has reunited with Dani Cage and Bruce Banner Jnr who together sought Forge’s compound to recover but were followed by Sabretooth and his clone foot soldiers who captured Bruce. Now Logan and Dani are in pursuit.

Ed Brisson has certainly got a bleak world for Logan to work in here. Set in the badlands the landscape is pretty unforgiving but it’s also the people and the overall atmosphere that seems quite harsh… but that’s kind of what Logan is used to… does he find trouble or does trouble find him, or perhaps it’s a bit of both. This is definitely not the hope filled world of the X-men Logan… this is very much the Nietzsche infused Logan… the world is going to hell but he’ll fight on until he can fight no more.

Mike Henderson has taken that verbal bleakness and brought it to life… albeit a dire foreboding life. The colours and shading really help transport the reader to the harshness of this world. There’s the moments of furious action interspersed with more peaceful moments with tonal work to match. My only issue (and it’s pretty minor) is that some characters look a little too “cartoonish”… especially The Hulk.

Every now and then it’s nice to read a less “bright” story… something with perhaps a more gritty edge to it… something that doesn’t pain the world as all roses. Dead Man Logan is definitely a comic that fits that bill. There is hope… so it’s not all doom and gloom… but it is very much an up hill battle for our heroes and it doesn’t look at all certain that they have a happy future ahead of them. Worth a read if you like your stories a bit darker and if you love brutal Logan!