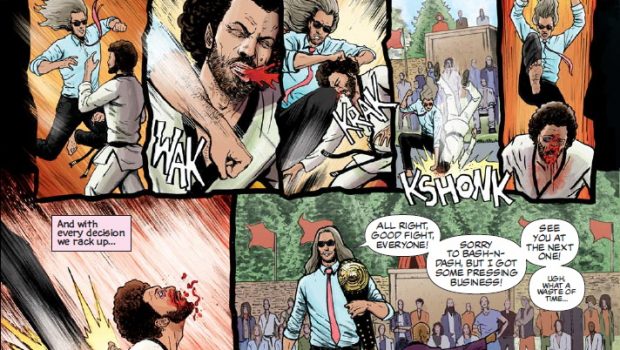 Summary: One for fans of martial arts and action movies and for people who like a lot of action in their stories in general and not just in the form of superheroes.

Bare-chested sweaty men pounding on each other

Inspired by Kung Fu and other martial arts movies the Dead Legends series covers an ongoing conflict from one group of assassins going after another group. They do try and paint one group as “good” and the other as “evil” but who is really to say since they both take payment for their services.

It does get straight into the action with the leader winning a martial arts tournament almost by default and sending a hit squad after the other group who have had to move around a lot to stay under the radar.

They get overwhelmed by the attackers, but not before putting up a good fight and some of them manage to escape.

There is some excellent artwork here and a lot of violent and bloody action drawing from the movies that it was inspired by. Unlike a lot of the movies there are a lot more women martial artists and main characters and they seem to hold their own.

The story does end on a cliff-hanger and I did feel like I wanted to see more of this story.

It might help if you have seen the previous story in the series so you know who everyone is but it seemed to go well enough without me knowing that during this one.

I would recommend this one to fans of martial arts and action movies and for people who like a lot of action in their stories in general and not just in the form of superheroes.