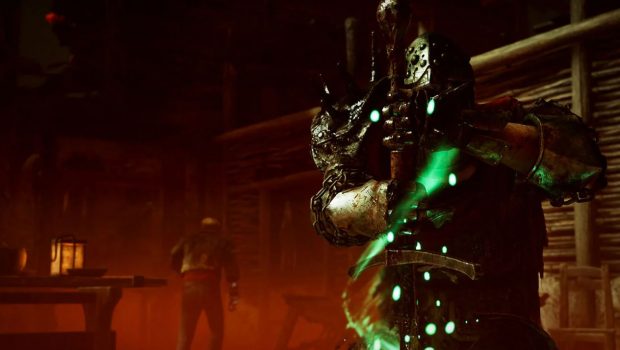 Dead by Daylight Delves into Medieval Horror with its New Chapter: Forged in Fog, Available Now

With its latest Chapter, Forged in Fog, Dead by Daylight turns back time to explore a genre new to the long-running franchise: medieval horror. Players are invited to embody both the brutality and nobility of this bygone age with a new Killer, The Knight, who brings fresh strategic gameplay to The Fog, and new Survivor, Vittorio Toscano, a mysterious wanderer of realms. Forged in Fog also includes the release of a new Map, The Shattered Square, set among the smoldering ruins of a ransacked medieval village.

Players hungry to explore a new Realm within the Dead by Daylight universe will have plenty to look forward to in The Shattered Square Map, where Forged in Fog’s medieval themes come to life in detail. This once-thriving village now lies in ruin; burnt, decayed, and reduced to a dark fragment of history by The Knight and his accomplices. Smoke and death hang thick in the air. Demolished buildings litter the landscape. The market at the village center is now little more than a silent graveyard of toppled carts. Adding to the atmosphere, familiar elements of gameplay have also been brought into the dark ages, with Pallets, Breakable Walls, and even iron-forged Exit Gates updated to match the setting.

Killer mains will have the opportunity to don a suit of bloodstained armor, raise their longswords and terrorize Survivors as the brutal, calculating new Killer, The Knight. Born Tarhos Kovacs, The Knight entered into the service of Lord Vittorio Toscano, ultimately betraying him in favor of his own dark plans. One of the most physically imposing Killers on the Dead by Daylight roster, The Knight’s unique Power, the Guardia Compagnia also makes him one of the most strategic. He can call on his 3 loyal AI-controlled Guards, The Carnifex, The Assassin, and The Jailer – each possessing their own unique qualities – to patrol the Map or carry out certain tasks, forcing Survivors to face off against multiple threats orchestrated by The Knight.

The new Survivor, Vittorio Toscano offers an ideological opposite as a man of peace, and a scholar on a quest to uncover arcane secrets for the greater good. Following his betrayal and torture at the hands of Tarhos Kovacs, he was pulled into The Entity’s Realm where untold years of exploration in The Fog have forged him into an exemplary leader with a fearless disposition.

A Door Opens To A New Collection

To celebrate medieval horror’s arrival in Dead by Daylight, this latest Chapter’s release will be accompanied by exclusive Outfits for Vittorio Toscano and The Knight as part of the Forged in Fog Collection, available now. The Very Rare Arcane Ink Outfit for Vittorio Toscano puts the mysterious glowing tattoos adorning his torso on full display. Distinct leather trousers and a collection of ancient amulets round out the ensemble. The Knight’s already terrifying appearance is ratcheted to new heights with the Ultra Rare Enchanted Plates Outfit that sees him clad in ancient mystical armor emblazoned with ominous glowing runes.