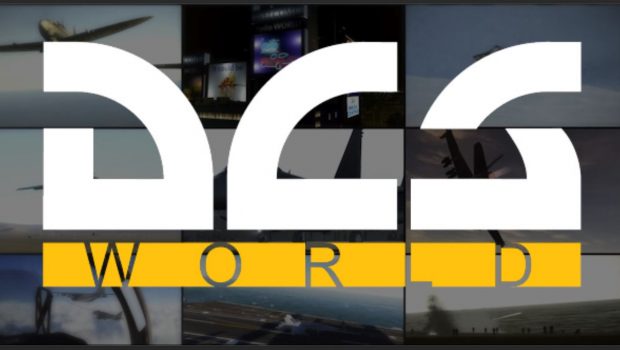 Summary: A no nonsense sim not for the casual player. Dedication is what you need for success.

Get to the Chopper!

DCS (Digital Combat Simulator) is pretty much the cream of the crop when it comes to air combat simulations. I am not talking about just being able to jump in, fly around, and shoot at stuff as if it was a walk in the park either.  Oh No! Eagle Dynamics DCS puts the Simulation in Simulator.

They cater to those elite niche gamers that want their gaming experience of air to air and air to ground combat as close to the real thing as possible in a GAME.

I find it so hard really to call this a game since the level of detail is so incredible. DCS: AH-64D Apache is a realistic flight simulator. Every switch and setting in both cockpits are clickable. You are pretty much learning to fly the AH-65D Apache. 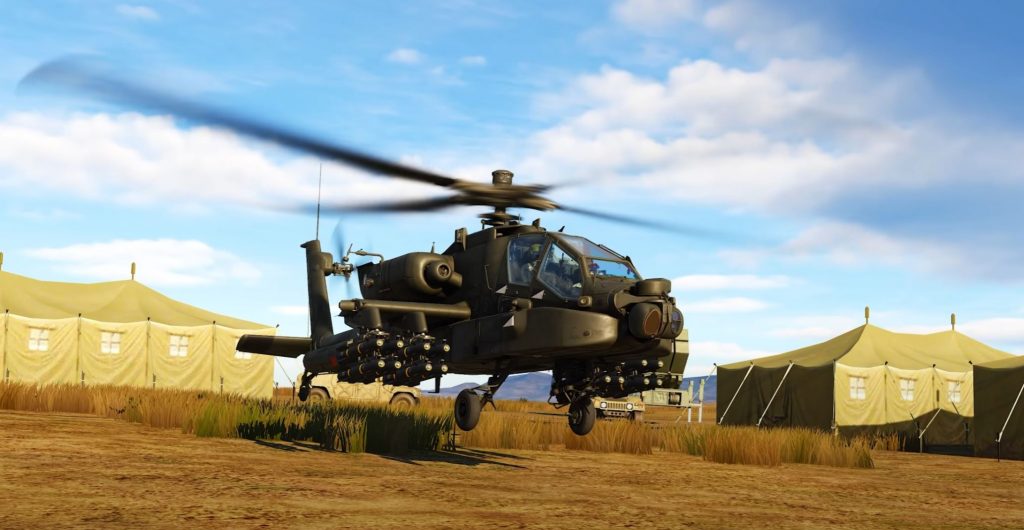 If you want a challenge, then you have come to the right place. Once you do the tutorials on even starting the aircraft up and maneuvering, and its weapons systems you are on your way. However, all of the learning leading up to your first mission is an adventure unto itself.

You will not just jump into this and expect to be flying the game within moments of game load. 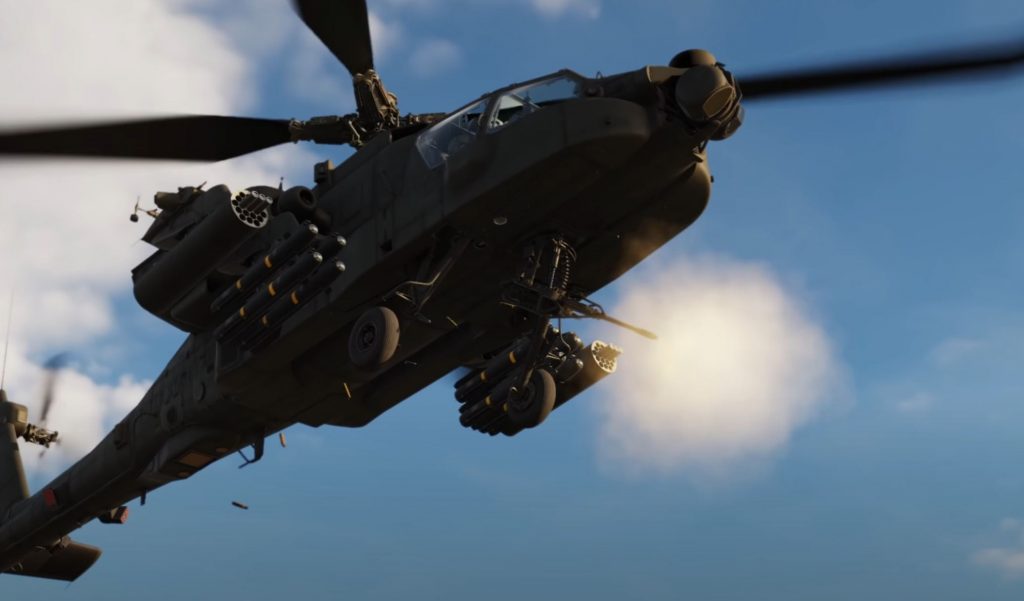 Eagle Dynamics released the early access version of the H-64D Apache Longbow module for its free-to-play simulator DCS World. While the base WORLD is free, the module for the game cost. Now one of the things that may confuse some players is that some modules like the new AH—64D may not even show up after you made the purchase. Fear not. Going into the STEAM menu for the game all you have to do is make sure that DCS World Open Beta is checked. Since the new game module Requires DCS World Open Beta to play. 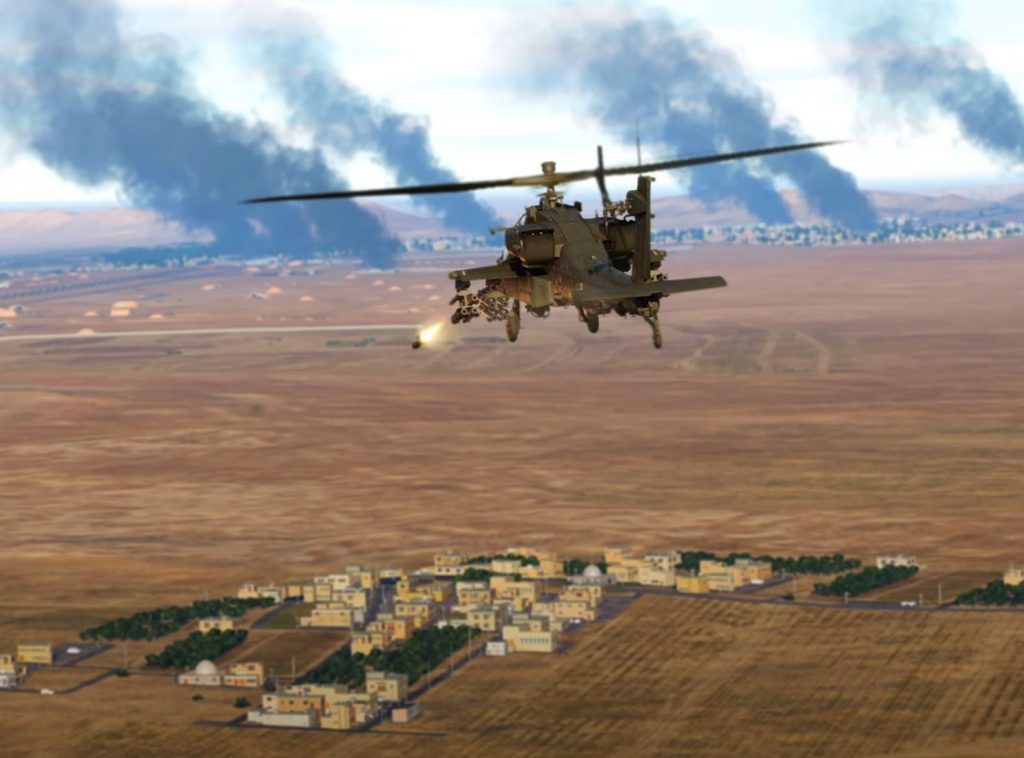 I am using a Logitech G940 flight system with stick and separate split throttle control and rudder pedals. Though it has been, a nightmare getting it configured and set up.  Even after getting things set up you may find that, the controls are sensitive to the extreme. Small adjustments are all it takes handing this helicopter.

Even after that make sure you have the right expectations. Your best route in this is to go through the tutorials. Take offs and landings, targeting, weapons systems, etc etc. You are pretty much in for a long haul with this product but the sense of accomplishments are huge with such a complex sim.

Once air borne and on mission and keeping yourself from crashing into the ground, and tasked to take out enemy vehicles and personnel.

Best results comes from observing and finding targets the best thing to do to keep from getting blasted out of the sky. Running and gunning without strategy is a sure swift road to failure for playing this game. You will find yourself checking approaches and observing for targets using both, your eyes and the systems of the helicopter a lot. 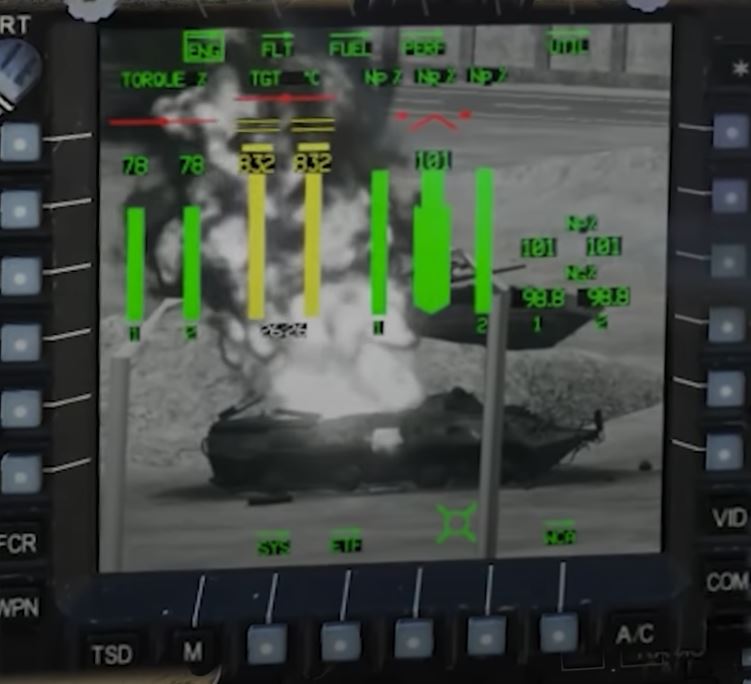 AH—64D is a two seat aircraft. The game has you covered when playing alone. Flying in single player you have the option of changing between the pilot seat and the Co Pilot Gunner seat plus use the George AI helper. The AI crewmember is a radial dial menu. The George can pilot or leave the task of locating and taking out targets to AI George. There is a kind of pause action button. It gives you the chance to use any other buttons and the radial menu or switch seats without crashing and burning.

Now you have a lot going on already in this Simulator, and the real blast comes if you have a Virtual Reality headset. Yes, you can play in VR for PC in STEAM, which really brings the tense feel of many of the missions up several notches. The game can be over whelming for those UN initiated in the world of Digital Combat Simulators before even adding VR. My own configuration of the old Logitech G940 flight stick and throttle and rudder pedals was a bit difficult to calibrate as it was. Adding VR was just a mind-blowing experience.  I really enjoyed it, even if I crashed a lot. 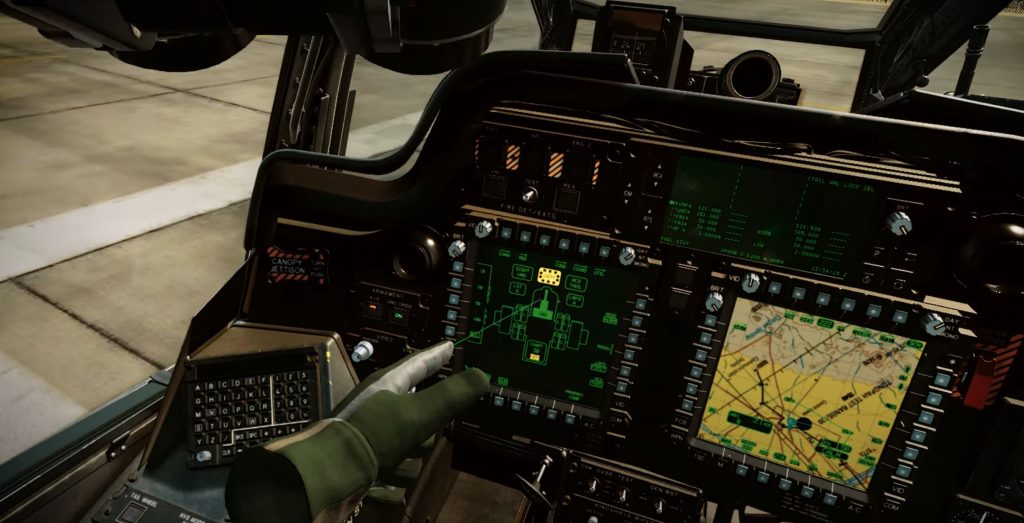 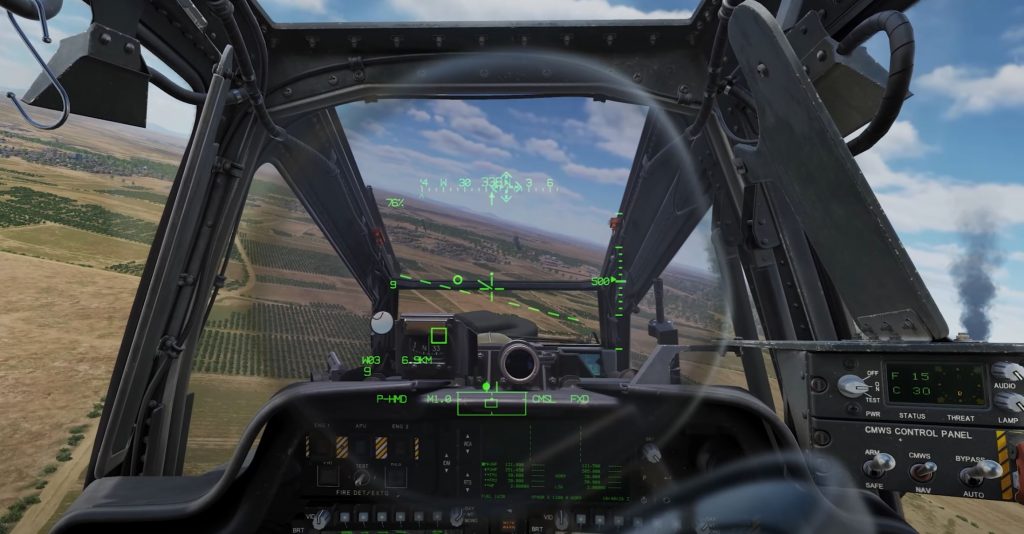 At the end of the day, this game/simulator AH-64D Apache amounts to a module for the Digital Combat Simulator main game….is not for the casual gamer really. It takes some dedication to even get yourself off the ground and even come close to being effective on missions.

For those that love to be in the digital simulated seat of a war aircraft. This one is for you all the way!

To help any of you sim pilots out there, if you got to the DCS web site you can a quick reference kneeboard guide for the Apache. Just follow the install instructions on the page for an in game reference guide.