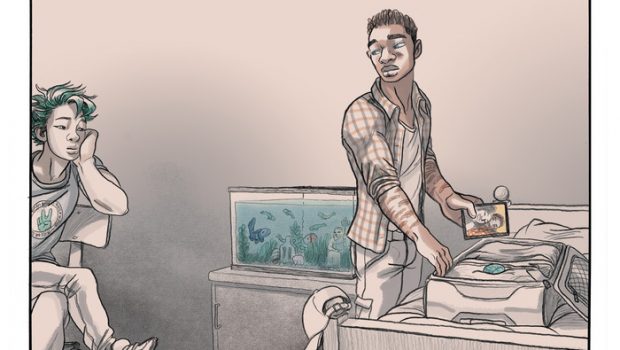 Debuting in June 2020, You Brought Me the Ocean is a new young adult graphic novel from DC that puts a fresh, contemporary twist on Aqualad’s classic origin story and tells an eloquent coming-out romance set against the backdrop of the DC Universe.

This timely and beautifully told story is brought to life by Lambda Award-winning author Alex Sanchez (Rainbow Boys) and New York Times bestselling illustrator Julie Maroh (Blue Is the Warmest Color), two voices that have been instrumental in shaping the LGBTQ+ experience in young adult literature. Their original tale follows a teenage Jake Hydeas he navigates his senior year of high school and learns to embrace his true self.

“This story will allow readers to delve deep into the conflicts of being both a teen and super-powered—and what it’s like to be friends with a super-powered teen,” said Sanchez. “I believe it will be the type of book that fans will read twice—the first time, compelled to turn pages to find out what happens next, and the second time to linger over Julie’s spectacularly beautiful imagery. I hope the book will do what graphic novels do best—tell a story on two levels—through words and art.”

“I’m particularly excited and proud to see this book coming to life in a crucial decade for LGBTQ+ rights,” said Maroh. “Lives of gay, queer, and trans people of color are particularly at stake. I sincerely hope that this book will bring light and strength to the daily life of whoever suffers due to discrimination or just feels different.”

You Brought Me the Ocean marks both Sanchez and Maroh’s first work with DC and is scheduled to hit stores and online retailers everywhere books are sold on June 9, 2020. Below is the official synopsis and above is a first look at the cover and interior images revealed today.

You Brought Me the Ocean

Jake Hyde doesn’t swim––not since his father drowned. Luckily, he lives in Truth or Consequences, New Mexico, which is in the middle of the desert, yet he yearns for the ocean and is determined to leave his hometown for a college on the coast. But his best friend, Maria, wants nothing more than to make a home in the desert, and Jake’s mother encourages him to always play it safe.

There’s nothing “safe” about Jake’s future—not when he’s attracted to Kenny Liu, swim team captain and rebel against conformity. And certainly not when he secretly applies to Miami University. Jake’s life begins to outpace his small town’s namesake, which doesn’t make it any easier to come out to his mom, or Maria, or the world.

But Jake is full of secrets, including the strange blue markings on his skin that glow when in contact with water. What power will he find when he searches for his identity, and will he turn his back to the current or dive headfirst into the waves?