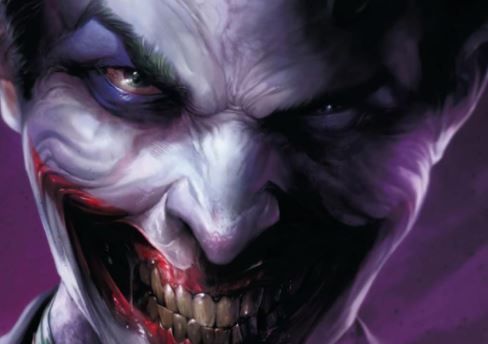 The Clown Prince of Crime is the Target of a Worldwide Manhunt!

The Joker’s alleged attack on Arkham Asylum in DC’s Infinite Frontier #0 resulted in untold carnage and destruction, and the rise of The Magistrate and the Peacekeepers in Gotham City! As a result of the events that came to be known as “A-Day,” a mysterious benefactor hires former Gotham City Police Commissioner Jim Gordon to go on a global manhunt to catch, and potentially kill the Clown Prince of Crime.

The Joker Volume One collects the first five issues of the series, written by award-winning writer James Tynion IV (Batman, Detective Comics, The Nice House on the Lake) with art by Guillem March. This volume also includes a special Year One flashback issue co-written by Tynion and Matthew Rosenberg (Legends of the Dark Knight) and artist Francesco Francavilla (Batman: The Black Mirror).

Though the world is after him for the destruction of Arkham Asylum, nothing involving the Joker is ever as easy as it seems. What Gordon finds and what the Joker wants him to see…will change his perspective on the world forever. And he’s not the only one who wants the Joker found; the mysterious Sampson family are on his tail as well as Vengeance, daughter of Bane!

For the latest information on The Joker and the World’s Greatest Super Heroes, visit the DC website at www.dccomics.com and follow @DCComics and @thedcnation on social media. The DC UNIVERSE INFINITE digital subscription service includes a can’t-miss selection of titles involving The Joker, as well as books by James Tynion IV and Guillem March. For more details and a free trial, visit www.dcuniverseinfinite.com.