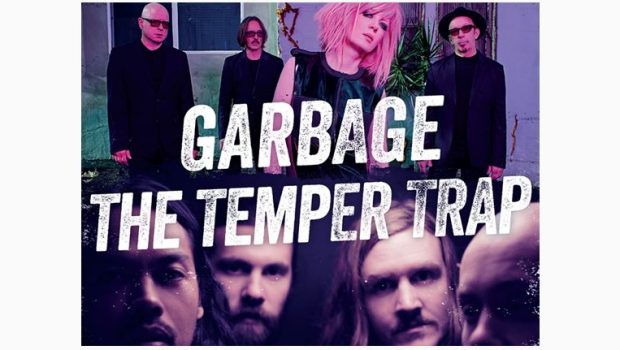 A Day On The Green Presents Garbage and The Temper Trap

a day on the green has assembled an epic line-up for its next series of winery concerts.

Alt-rock pioneers Garbage and Australia’s own multi-platinum chart toppers The Temper Trap will come together as part of their respective national tours for five outdoor events through November/December.

The concerts will feature a stellar under-card with special guests The Preatures, Tash Sultana and Adalita. The five band bill kicks off at Victoria’s Rochford Wines on Saturday November 26.

These will be the Garbage’s first Australian shows since 2013 and celebrate their acclaimed sixth studio album Strange Little Birds (out now via Liberator Music).

To create Strange Little Birds, their first album in four years, Garbage (Shirley Manson, Steve Marker, Duke Erikson and Butch Vig) drew on a variety of influences including the albums they loved growing up. Upon its June release, the album debuted at #9 on the ARIA Album Chart and picked up widespread acclaim:

‘20-plus years after forming, each band member is still fired up to mine new sounds and approaches for inspiration. That willingness to be uncomfortable and look beneath the surface makes Strange Little Birds a rousing success.’ – The A.V. Club

In support of the album’s release, Garbage performed a powerful two-song performance on Jimmy Kimmel Live! – watch ‘Empty’ here and ‘Push It’ here.

From their lauded self-titled debut (1995) through to Strange Little Birds, Garbage’s innovation, unique sound and provocative visual aesthetic has inspired massive worldwide attention and success with tracks like ‘I Think I’m Paranoid’, ‘Only Happy When It Rains’, ‘When I Grow Up’, ‘Stupid Girl’ and ‘Cherry Lips’ becoming instant classics.

Renowned for their incredible live rock shows, Garbage have also sold 12 million albums worldwide, performed in over 35 countries and continue to perform sold out shows across the globe more than two decades since their formation.

For The Temper Trap the shows are the first since the release of their acclaimed third album Thick As Thieves (out now via Liberation Music). The LP rocketed to the top of the ARIA Album Chart upon its debut, the second The Temper Trap album to do so – their platinum-selling self-titled album also debuted at the top of the charts in 2012.

Thick As Thieves saw The Temper Trap collaborating with outside songwriters for the first time in their history, with striking results. The album’s lead single ‘Fall Together’ is an instant festival classic with an equally stunning video, directed by the incredibly talented Kris Moyes and filmed on the beautiful Greek Island of Milos – watch it here. Follow up single ‘Lost’ has also begun making its mark on the airwaves, being picked up by radio stations across the country.

‘Songs filled with hope, raw energy and passion’ – The Independent

One of Australia’s biggest and most-loved bands, The Temper Trap have sold more than one million albums worldwide. Their songs have been streamed more than 200 million times on Spotify while their videos have picked up another 20 million times views on YouTube.

Their breakthrough debut album Conditions made its mark on the charts in their native Australia, their adopted homeland in the United Kingdom, and across the globe, propelled by smash hits ‘Sweet Disposition’, ‘Fader’ and ‘Love Lost’. Following suit, The Temper Trap’s self-titled second album spawned Platinum-certified hit ‘Trembling Hands’ and Gold-certified single ‘Need Your Love’.

The quartet’s phenomenal live show has caught the attention of Coldplay, Africa Express and The Rolling Stones, all of whom have asked the band to join them on tour. The Temper Trap are currently in the midst of four months of globetrotting with shows throughout Europe, the United Kingdom and the United States with major festival appearances at Field Day, Secret Garden Party, Reading and Lollapalooza on the schedule before their return to Australia.

The brash, joyous pop of The Preatures has already endured them to audiences nationally. Their 2014 debut album “Blue Planet Eyes” continued in the vein of the gorgeous ‘Is This How You Feel’ single which catapulted them from Sydney’s best kept secret to stages worldwide like Glastonbury and Coachella. Fronted by the charming Izzi Manfredi, the Preatures’ live shows are always blissful affairs.

After making a name for herself busking in her hometown Melbourne, 20-year old Tash Sultana’s homemade videos picked up millions of views and established her as an artist to watch. Her carefully crafted, edgy fusion of multi-instrumental pieces including beat boxing, unique guitar work and percussion-styled finger tapping has left sold-out audiences across the country in awe.

Adalita may be best known as the front woman for Australian indie rock group Magic Dirt, but her two solo albums ‘Adalita’ (2011) and ‘All Day Venus’ ( 2013) have confirmed her status as one of Australia’s most ambitious and vital indie artists. Adalita is currently working on her third solo album.

a day on the green is a fully licensed event. Strictly no BYO alcohol. Food will be available on site or BYO picnic. For all transport, accommodation and event information, go to www.adayonthegreen.com.au.