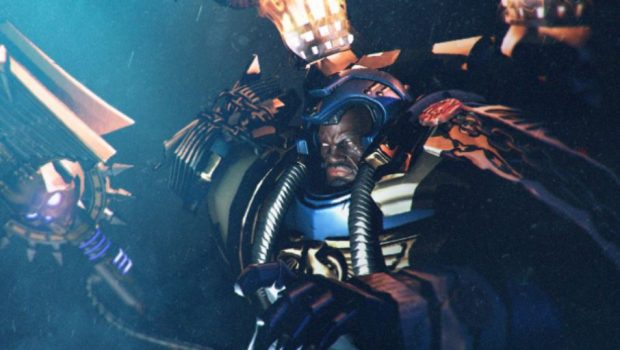 Jonah Orion, Chief Librarian of the Blood Ravens, is a psyker of tremendous renown. First seen in Warhammer 40,000: Dawn of War II – Chaos Rising, Orion returns to battle in Dawn of War III as one of the powerful Elite units at the player’s disposal. Oh, and he’s joined by a demonic Cherub familiar, through which he channels his psychic abilities. So, there’s that.

In the Blood Ravens’ darkest hours, Jonah Orion endured the predations of the Tyranid Hive Mind that wiped out his fellow Librarians. Charging into battle after battle, he miraculously survived what was thought to be mortal wounds. His sacrifices caught the attention of Chapter Master Gabriel Angelos, who promoted him to Chief Librarian of the Blood Ravens.

Orion’s powerful support and crowd control abilities make him an incredible asset on the battlefield. Combining his abilities in creative ways will be the key to success. Effects from each of his abilities grant buffs to allies while crippling enemies, making for powerful combinations that can turn the tide of battle! See clips of these abilities in action, and Orion’s 3D model here.

To learn more about Jonah Orion, and for future updates about Dawn of War III, be sure to head to DawnOfWar.com, and follow the Dawn of War social channels! Catch our past unit spotlights for Imperial Knight Solaria, Assault Marines, Whirlwinds, and Assault Terminators!