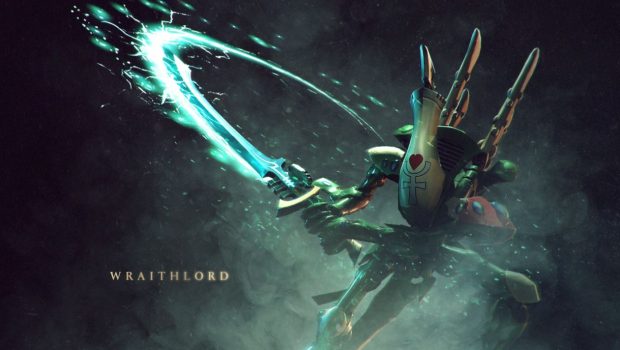 Wraithlords are piloted by the ghostly spirits of lifeless Eldar entombed within spirit stones. Unlike the smaller Wraithblades, Wraithlords are much larger and can only be guided by the most revered Eldar heroes. A lesser mind would not have the strength of will needed to command these colossal wraithbone constructs. Check out the 3D motel of the Wraithlord here.

Though the constructs themselves aren’t scarce, Eldar souls able to pilot them are. Despite the looming danger of losing their souls to the Warp in defeat, fighting as a Wraithlord allows the Eldar hero within to continue shaping their legacy – even in death

A Wraithlord can provide a strong front line and engage enemy troops with a quick charge into battle. Lunging through the opposing line with Glaive Charge will scatter carefully-placed squads like flies. Once in close combat, the Wraithlord can deliver a flurry of fatal blows with Critical Strike.

The Ethereal Wall temporarily blocks enemy fire. Units that pass through it are affected for a short duration – allies receive a speed increase and enemies are slowed.

To learn more, and for future updates about Dawn of War III, be sure to head to DawnOfWar.com!