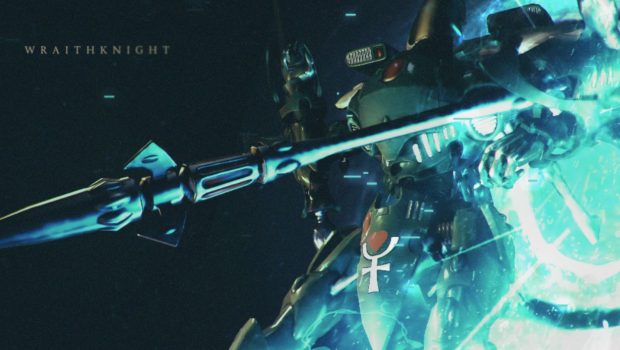 After months of relishing in the devastation that the Space Marine’s bring to the battlefield with Imperial Knight Solaria, it’s time to meet the Eldar’s counterpart: the Wraithknight. These towering constructs are made from the signature Eldar wraithbone and though monstrous in size, remain nimble and agile on the battlefield.

Armed with two Heavy Wraithcannons, this unit is best suited for ranged combat, supported by a jump ability to keep it out of harm’s way. This Wraithknight also boasts a devastating focused beam attack, and a distortion rift that is capable of reducing enemy mobility – ideal for helping allied units line up and deploy powerful, slow-fire abilities.

Like all Eldar units, the Wraithknight relies on Battle Focus and the health shield it provides to shrug off damage during a fight. Once its focus is depleted, the Wraithknight won’t be able to withstand prolonged fire. Melee units can also tie up these massive constructs, too, as they don’t have a way to quickly escape if their Jump is on cooldown. But, keep your Wraithknight supported by your troops, and it is incredible at locking down enemy units and setting up devastating combos. See more, including a 3D model, here.

Jump
The Wraithknight jumps to a position. After landing, the Wraithknight will continue to slide forward for a distance, gaining increased weapon fire rate.

Distortion Rift
The Wraithknight creates a distortion rift at a target position. The rift expands in a radius over time, pulling enemy infantry into it. Vehicles hit are slowed.

Focused Beam
Fires a broad, long-range energy beam that deals damage to all enemies in a direction.

To learn more, and for future updates about Dawn of War III, be sure to head to DawnOfWar.com!