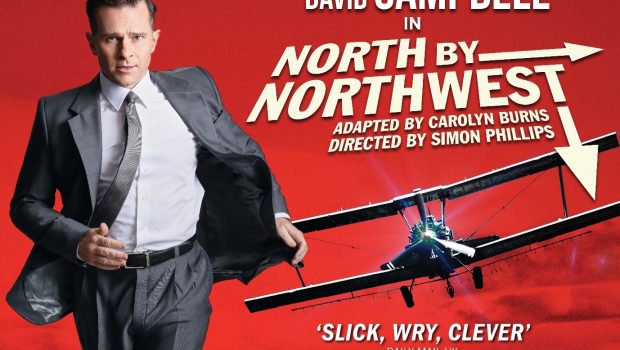 Following sell out seasons in Melbourne, Adelaide, Brisbane the U.K. and Toronto, the triumphant stage adaption of Alfred Hitchcock’s North by Northwest will play an exclusive limited season at Sydney Lyric Theatre from March 9 2022.

Boldly re-imagined for the stage combining the magic of film and theatre, this incredible production of Hitchcock’s gripping comedy of suspense will star David Campbell as Roger O. Thornhill the suave advertising executive and man on the run. David is one of Australia’s most popular entertainers, now returning to the stage in the role made famous by Cary Grant in the 1939 classic. The singer, actor, television and radio presenter has dazzled audiences over the years with his dynamic performances, as Johnny O’Keefe in Shout! and, more recently, his Helpmann Award-winning portrayal of Bobby Darin in the hit musical Dream Lover.

“As a fan of the movie and of Simon and Carolyn, it was a no brainer to say yes to this remarkable production. This show has to be seen to be believed. I am thrilled to be working with this dynamite cast and it really is exciting to be involved in live theatre at a time where it should be well and truly celebrated.”, said David Campbell.

Adapted for the stage by Carolyn Burns and directed by Simon Phillips, North by Northwest has every twist, every thrill and every hairbreadth escape from Hitchcock’s original genius work in this stunning stage production. Clever set design, dynamic projections and an instantly recognisable score bring the film adaptation to life.  From the skyscraper canyons of New York City to the Black Hills of South Dakota, drunken car rides down twisting roads, a love affair on a train, to the famous cliffhanger ending on Mount Rushmore, all is ingeniously recreated live on stage.

Director Simon Phillips said, “I’m delighted that Sydney audiences will finally get to enjoy North by Northwest, following in the footsteps of the rest of the Australia, Canada and the UK. This production is particularly dear to my heart – it’s a show-bag of all the things I enjoy about the theatre, both high and low tech, with a company of actors demonstrating their dazzling versatility and prowess. It’s a particular pleasure here in Sydney to be reunited with my dear colleague David Campbell, whose innate theatrical savoir-faire is perfectly suited to the imperturbable Roger O. Thornhill, and the magnificent Amber McMahon, whose smouldering Eve Kendall melts his superficial heart. This is both a tribute and a playful deconstruction of a glorious piece of classic cinema that remains one of the smartest films of all time.”

Roger O. Thornhill’s uneventful life is turned upside down when he is thrust into a world of espionage, romance and murder. Abducted by thugs who insist he is a government agent named George Kaplan, the harried New York exec is hunted by ruthless spies in a break-neck journey involving the Feds, crop-dusting planes, a blonde femme fatale and a cliff-hanger that has to be seen to be believed.

Originally produced by the Melbourne Theatre Company (MTC) and Kay & McLean Productions, this captivating adaptation of Hitchcock’s classic spy-thriller enjoyed an overwhelmingly successful premiere season at the Art Centre Melbourne in 2015 as well as subsequent seasons in Melbourne, Adelaide, Brisbane, Toronto and in the UK receiving glowing reviews and standing ovations.

Kay & McLean Productions’ Liza McLean said she and Andrew Kay are thrilled to bring North by Northwest to Sydney Lyric for this exclusive limited season.

“We are incredibly excited to have the opportunity after this very challenging time for all Australians, in particular for our beloved Arts Industry, to reunite the extraordinary all Australian creative team to bring Hitchcock’s iconic film to the stage for the first time in Sydney. Since our first season back in 2015 with the Melbourne Theatre Company, this production and its company members have become like an extended family and I couldn’t be more thrilled to continue to grow this team with David Campbell joining us, leading this incredibly talented cast for our exclusive Sydney Season in 2022.  North by Northwest will delight audiences, its full of fun, glamour, thrills and drama.  We look forward to welcoming you all to the Sydney Lyric for a limited season in March.” said Liza McLean.

“When we first saw this whip-smart production that brings Hitchcock’s classic film to life, we knew instantly that Sydney audiences would love it.  We have been working to bring the play to our stages with Liza McLean and Andrew Kay for over 5 years, and finally it’s time.  The casting for the exclusive Sydney season is first class and perfectly complements a brilliantly conceived and directed work that can’t help but entertain.  Plan a wonderful night out at the theatre to see North by Northwest, something to look forward to after the challenging year we’re leaving behind us” said Graeme Kearns, CEO of Foundation Theatres.

Years before the James Bond films there was North by Northwest – the debonair, witty and captivating thriller that will have Sydney theatre audiences on the edge of their seats.

★★★★ ‘Strokes of theatrical genius … slick and thoroughly entertaining’ – The Age

★★★★ ‘A zippy and hilarious night at the theatre’ – Time Out

Originally produced by Kay & McLean Productions in association with the Melbourne Theatre Company.