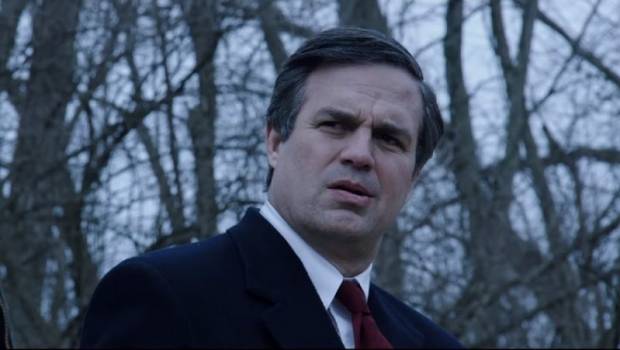 By sticking to the facts and housing a strong Mark Ruffalo performance, Dark Waters is another fine entry for director Todd Haynes. He and his screenwriters, Mario Correa and Matthew Michael Carnahan, have adapted Nathaniel Rich’s New York Times article, ‘The Lawyer Who Became DuPont’s Worst Nightmare’. The basis of Rich’s article is a disturbing legal and environmental case, which will lead some to compare this adaptation to other investigative films, such as Erin Brockovich (2000) and Spotlight (2015).

However, after directing Far from Heaven (2002) and Carol (2015), Haynes proves again that he is an intelligent filmmaker in his own lane. His unique filmic style is balanced with a substantive story. The sheer volume of territory Dark Waters covers is notable and so is the film’s coherency and the human stakes Ruffalo provides. By dramatising the pivotal emotional toll of the crisis, Dark Waters proves to be a worthy companion to the article.

In one of his best performances, Mark Ruffalo plays attorney Rob Bilott. Its 1998 and Rob has recently been made a partner in a Cincinnati law firm, Taft Stettinius & Hollister. Despite support from his boss, Tom (Tim Robbins), Rob remains distanced from the firm’s senior partners.

He is surprised when a farmer, Wilbur Tennant (Molly’s Game’s Bill Camp), demands representation and leaves him with several tapes. While Tennant claims his farm in West Virginia is polluted by a DuPont plant, Rob reminds him that he does not pursue chemical companies but represents them. However, when Tennant mentions he has contacted Rob’s grandmother, who lives in West Virginia, he grows sympathetic to the case.

An inspection of Tennant’s farm reveals that one hundred and ninety cows have died. Tennant argues it is because the creek, where his animals drink water, is poisoned. He also notes staining on the rocks, the enlarged organs of the animals, and the black colouring of their teeth.

When a bull mindlessly attempts to charge their vehicle, he does not hesitate to shoot the animal. After seeing the damage, Rob returns to Cincinnati to pursue the investigation and has DuPont turn over their documents. Tom is weary of suing a major partner but supports Rob. However, they encounter strong resistance from a DuPont figure, Phil Donnelly (Alias’ Victor Garber). 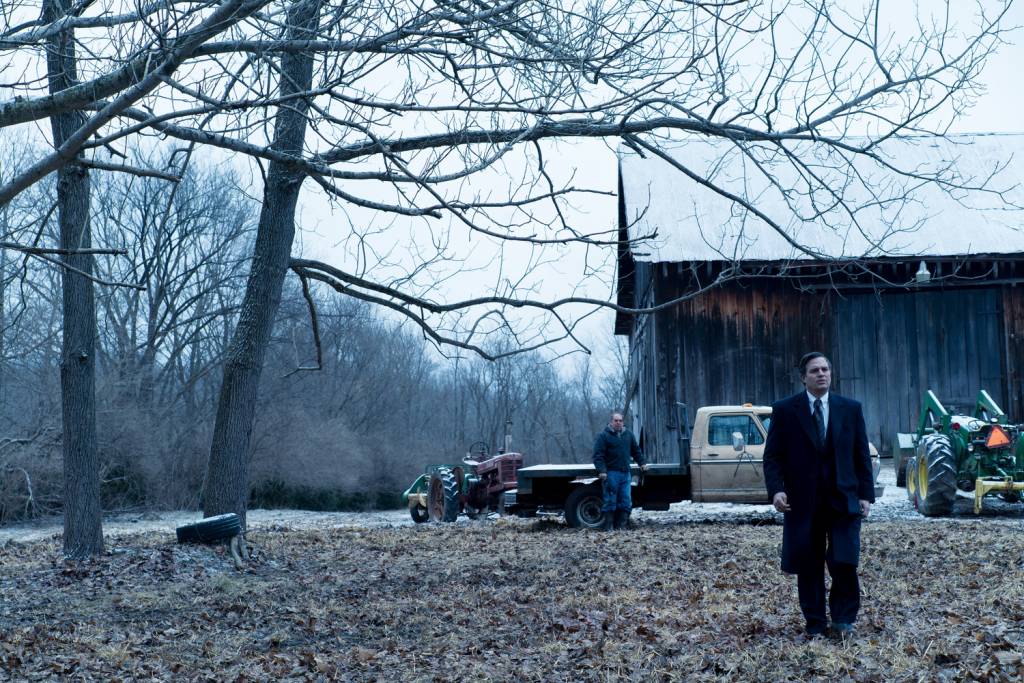 He fails to return Rob’s calls regarding chemicals DuPont has employed. The investigation reveals that DuPont has documented its decades-long use of an unregulated substance called perfluorooctanoic acid (PFOA) and its effect on their workers and the environment. Rob’s dedication, which extends over many years and into a major lawsuit, weighs heavily on his family. His wife, Sarah (Anne Hathaway), is concerned about Rob’s absence, especially as their family grows.

Todd Haynes’ visual choices add pivotal emotional and psychological insights to the story. Many scenes in Dark Waters are photographed with grey, monochrome tones and the textures of the architecture are comprised of concrete, glass, and steel surfaces. One anomaly is an industry dinner where the colour palette is golden. The deliberate visual shift reflects the insulated world of the wealthy and powerful where Rob and Sarah are abruptly dismissed from conversations.

Most frequently, the muted, desaturated colour palette dramatises Rob’s isolation from his peers. He is a new partner in the firm and ashamed of his upbringing. It is implied that he has also forgotten his roots because he scarcely remembers a pony ride as a child until his grandmother shows him an album of old photographs. 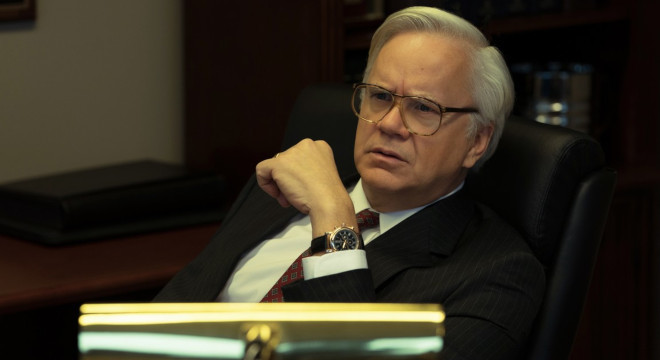 We are told that he frequently moved growing up and when talking to Tom he sidesteps the topic of living in West Virginia. Furthermore, Rob is filmed in various corporate scenes as a shy, diminutive figure who is towered over by his colleagues. His size and framing dramatise feelings of inadequacy and class shame. In one scene, he is alone in a small room with hundreds of dusty boxes, and the enclosed spatiality illustrates his isolation.

When he visits Tennant’s farm, the property is photographed as grey and desolate. Haynes blocks Rob and Tennant on the side of the frame and shoots the property from a wide angle. The image of the deep, outstretched farmland stresses their loneliness and helplessness against the deteriorating environment.

In another scene, the camera peers out the window of Rob’s car. The vehicle allows the apparatus to crab sideways and scan various buildings owned by DuPont. The song on the car radio is John Denver’s ‘Take Me Home, Country Roads’. The audio-vision implies that people’s livelihoods are subdued by corporate power. Consequently, Haynes’ visual choices articulate how Rob’s personal inadequacies mirror the helplessness of ordinary communities ruled by powerful industries.

Mark Ruffalo’s decision to underplay Rob perfectly articulates his character’s isolation. His minimalist performance reflects a lonely, detached, and increasingly fearful person. His realisation that the dangerous PFOA is used in various household products, including Teflon frying pans, is a chilling social revelation. It raises the story’s stakes by broadening the scope from a forgotten rural life and into a modern household.

The moment underlines a complex binary in Rob’s motives. He is unwilling to help Tennant but becomes determined to protect his family as he emotionally detaches from them. His deterioration, including a tremor in his hand, is believably pitched as a result of stress. Additionally, Bill Camp is excellent as the aggrieved Tennant. He is isolated from his community because people are angry that he is challenging DuPont, which provides employment to many people in the area.

While Sarah could have been a minor role, Anne Hathaway shows how deeply affected she is by Rob’s detachment. In one scene, she grows angry at him and she says she too has made sacrifices. She forfeited her own legal career to have children. The balance of their household is precarious the longer Rob challenges Taft’s clients. At the industry dinner, there is also an interesting comment about another woman keeping her pregnancy secret so she will not be fired by the firm, which gently mirrors Sarah’s experiences. 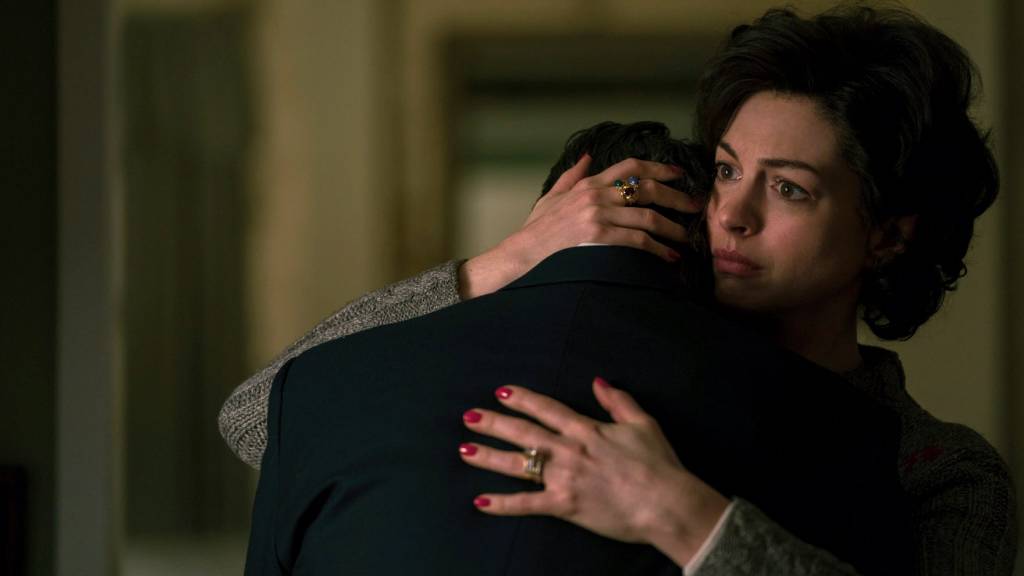 Tim Robbins only has a small part as Tom, but instead of growing predictably agitated by Rob’s determination he is surprisingly sympathetic to his cause. Victor Garber is suitably venomous as Phil Donnelly, especially during a scene where he swears at Rob and calls him a hick. The only distracting piece of casting is Bill Pullman whose brief presence jars as an eccentric lawyer.

In addition to major story revelations, including the fascinating history of using PFOA on military weapons, there is important social commentary exposing how careless countries like the US are when regulating corporations. It is noted how the Environmental Protection Agency allowed companies like DuPont to regulate themselves. No one blinks at letting the fox into the henhouse. There are also deceptive tactics, such as DuPont lying about safe exposure levels by simply increasing the threshold. 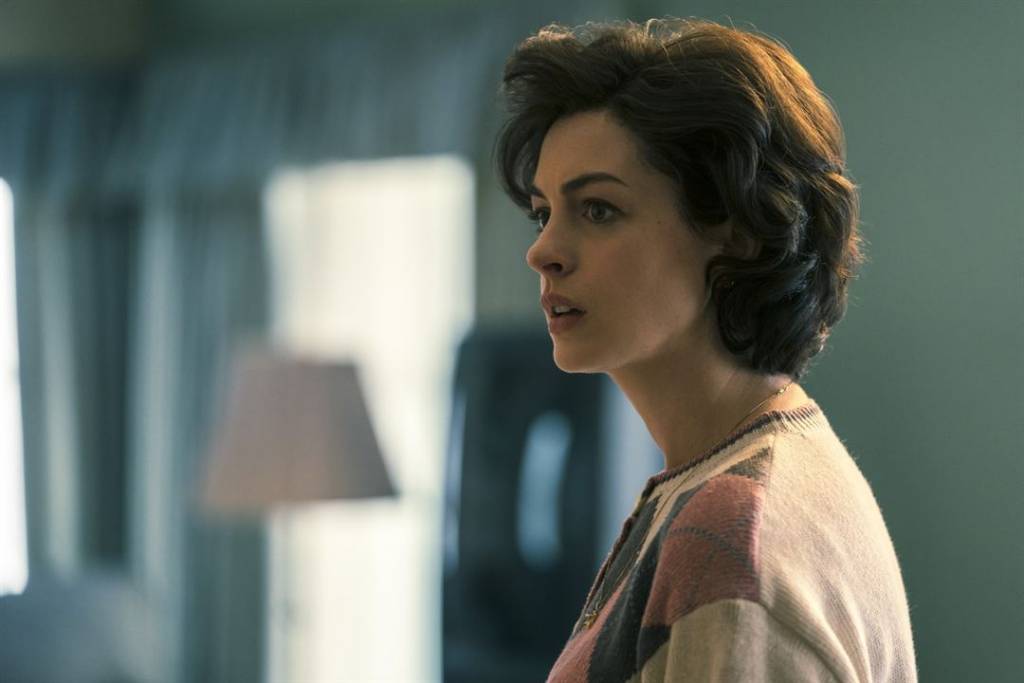 Dark Waters is incredibly dense but by carefully following the article’s daunting chronology it smoothly moves forward in time as Rob’s family expands, characters age, and others pass away. It expands on the article by dramatising the brutal toll the investigation took on Rob, Tennant, and Sarah. Meanwhile, Haynes’ stylistic choices complement Ruffalo’s excellent, diminutive performance.

Most importantly, Dark Waters is a political film that refuses to deter from revealing how careless, immoral, and corrupt DuPont was in its treatment of its workers, their families, and the subsequent cover-up. Having seen the film twice, it is admittedly challenging and a touch long. However, the depth of the exposé and Ruffalo’s subtle, humane work means it is rarely short of compelling.

Summary: The depth of the exposé and Ruffalo’s subtle, humane work means the film is rarely short of compelling.