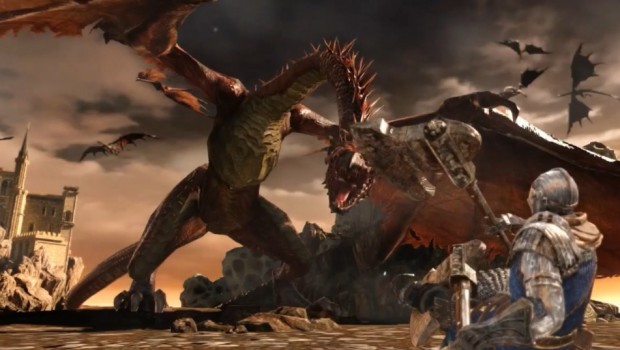 Dark Souls II is the highly anticipated sequel to 2011’s hit Dark Souls, a game that has been lauded as one of the most challenging and rewarding experiences in videogame history. In Dark Souls II, players face sadistic enemies and vile bosses as they journey through a devastated world where every step can turn into a struggle for survival. Only those with battle-hardened skills, strong intestinal fortitude, and cunning will survive their DARK SOULS II experience and achieve ultimate glory. Perseverance is key to achieving victory against the unrelenting bloodthirsty enemies and diabolical environments that await adventurers on this arduous journey.

Dark Souls II immerses players in a bleak setting full of danger and adventure while allowing them to discover what lies beneath the anguish and pain that engulfs the world. With Dark Souls II, Tokyo based developer FromSoftware has taken steps to enrich players’ experiences through improved visuals, life-like animations and dynamic lighting, while preserving the game’s core tenants to provide challenging gameplay and deliver true emotional elation from each hard-fought victory.

“FromSoftware really went the extra mile with DARK SOULS II in order to make it the legitimate heir to DARK SOULS, which was quite a challenge,” said Mathieu PIAU, EMEA Marketing Director at NAMCO BANDAI Games Europe. “No other game can quite compete with the DARK SOULS franchise when it comes to delivering a profound yet exhilarating gaming experience! As one of the most awaited games this year, DARK SOULS II promises an immensely rewarding adventure for those prepared to Go Beyond Death.”