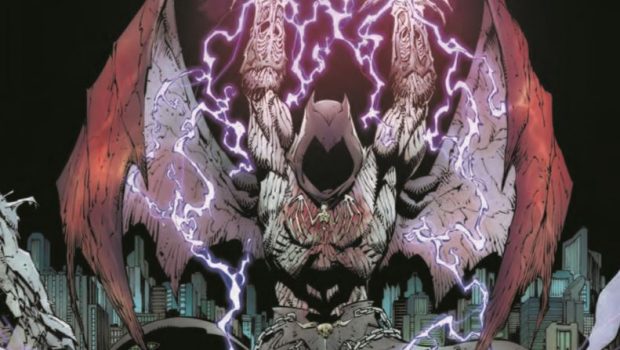 Summary: It really hits the fan in Dark Nights Metal #3!

The dynamic duo of Scott Snyder and Greg Capullo continue their epic story of what happens when a darkness from another Multiverse threatens the very fabric of the DCU in this massive comic book blockbuster. Needless to say, the @#$ is about to hit the fan as the heroes attempt to gather their forces from the nefarious Barbatos as his taint flows into a dream that Clark Kent is having over and over again.

Fortunately for Clark, he is rescued by Wonder Woman as Superman witnesses how much damage Barbatos has done since his capture in the real world. Unfortunately his temper for Lois being infected forces him to come face to face with another corrupted Bruce Wayne and before the forces of evil engulf him, he is rescued by The Flash and the mysterious Doctor Fate as they arrive in the Oblivion Bar, one of the last safe places in the universe.

It is here where the heroes are literally licking their wounds from the invasion of Barbatos and his soldiers as Nightwing recounts how they lost Gotham to the Murder Machine, including the fall of Central City and Coast City. Green Arrow also informs the heroes that Nth Metal can hurt these otherworldly invaders as Doctor Fate and Mr Terrific believe that the Plastic Man Egg is harbouring Nth metal coordinates to Atlantis, deep space and the centre of the multiverse.

Diana suggests that they break into smaller groups in order to retrieve more Nth metal, however the heroes bicker among themselves with Superman believing that the infected Bruce Wayne of their Earth holds the key. So as Barbatos’ soldiers find the Oblivion Bar, the heroes split into smaller groups thanks to Fate and Steel as Nightmaster and Detective Chimp hold their own into order to give them the time they need.

So while the heroes reach their intended destinations, Superman, Steel and The Flash arrive at the hidden antenna of the Anti-Monitor at the Fortress of Solitude. Superman believes that the Phantom Projector can help them get to the Dark Multiverse. Unfortunately Clark is captured by dark shadows of himself and comes face to face with Bruce who tried to warn him to not to come to the Dark multiverse as the issue ends!

Wow… Snyder and Capullo deliver their A-Game again and I thoroughly enjoyed this chapter of the truly insane and delicious Dark Nights Metal #3. The story is like going to some strange twisted theme park and although it feels familiar, it is far worse then you ever imagined. Furthermore, it was great seeing the heroes out of their comfort zone and more importantly I enjoyed the cameos such as Detective Chimp and seeing Doctor Fate (finally) a major mystic player in the DCU again. Complementing the story is the great art from Greg Capullo who really seems to be getting a kick drawing this corrupted universe and the heroes of the DCU.

Dark Nights Metal #3 was my favourite comic of the week and although it’s a two month wait until  Metal #4, Batman: Lost! will provide a very adequate filler until the next instalment of this crazy adventure into the Dark Multiverse.