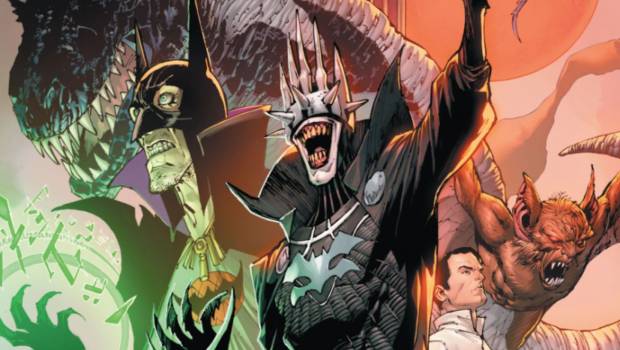 Dark Nights: Death Metal #3 by Scott Snyder and Greg Capullo, in stores August 11, has sold out ahead of on-sale, along with the anthology one-shot Dark Nights: Death Metal Legends of the Dark Knights #1, in stores August 4. These issues continue the unfolding story of DC’s most metal-est event of all time, and also feature early appearances of new antagonist the Robin King.

“He’s definitely one of our darkest creations, but I love him because I want the heroes to go up against something that says ‘Everything you believe people to be, everything you hope we are, we aren’t,'” Snyder told Newsarama in a recent interview. “I want to show that with the Batman Who Laughs and the Robin King.”

“The unabashed energy of Dark Nights: Death Metal #1 is the sort of thing most event books would kill to emulate,” Newsarama said in their review of Snyder and Capullo’s first issue, while Geek Dad said “this is one of the most unpredictable first issues I can remember, with callbacks to some of the greatest DC events of all time.” AiPT includes that Snyder and Capullo “are going down in comics history as one of the most dynamic, creative teams of all time,” while ComicBook said “they seem to be having an absolute ball creating this crazy world, and you’ll have just as much fun getting lost in it.”