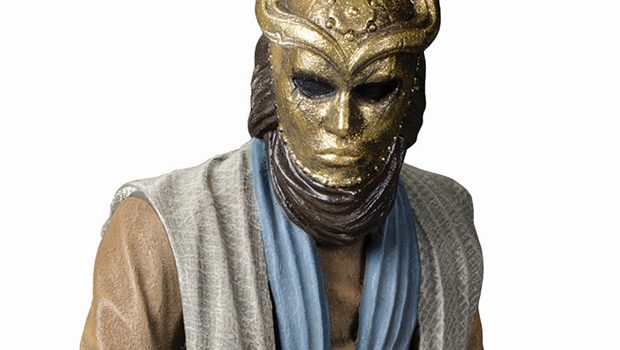 SAN DIEGO, CA —Dark Horse Deluxe, an imprint of Dark Horse Comics, has revealed the latest figure in an ongoing series of characters from the critically acclaimed HBO® series Game of Thrones®—Son of the Harpy.

The Sons of the Harpy is an underground insurgency group composed of former slavers who are fighting the rule of Daenerys Targaryen over Meereen. They take their name from the harpy, the heraldic symbol of the slave masters in the Ghiscari cities of Slaver’s Bay. They conceal their identities by wearing golden masks with horned faces resembling harpies.

Dark Horse Deluxe’s detailed figure represents one of the many Sons of the Harpy seen on HBO’s adaptation of Game of Thrones.

Son of the Harpy will be the twenty-fifth figure in the series and is slated for in-store release in October of 2016.

“The Dark Horse Game of Thrones figure series, with over twenty-five characters produced so far, has become a collection. We thought the mysterious and dangerous Son of the Harpy was the perfect candidate to join the family,” Dark Horse Product Development head David Scroggy remarked.

Response to Dark Horse Deluxe’s Game of Thrones collectibles line has been tremendous, and additional characters and products are in development for release in fall and winter 2016.

Game of Thrones figures have a suggested retail price of $24.99 and are packaged in deluxe window box packaging.