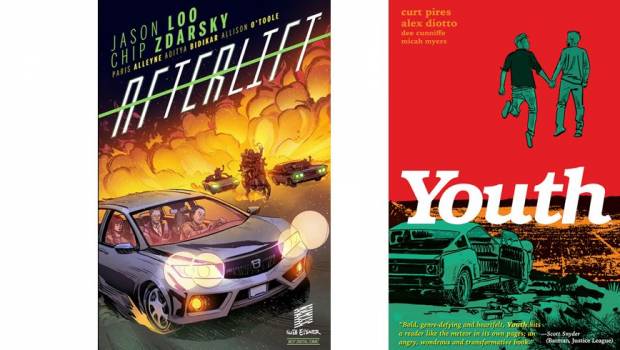 Dark Horse Comics, the legendary comic book publisher of titles including Black Hammer, Hellboy, Sin City and The Umbrella Academy, and comiXology, the world’s premier digital comics service, are announcing that Dark Horse will distribute print editions of comiXology Originals graphic novels and collections. Select titles from the creator-owned line of comiXology Originals will be available in print for the first time for customers in comic shops, bookstores, and libraries. The program will commence in Spring 2021 with the release of paperback editions of the Eisner Award winner AFTERLIFT, Breaklands, YOUTH, and The Black Ghost.

“The ComiXology Originals line is of the highest quality and diverse in its storytelling and talent,” said Dark Horse publisher and CEO Mike Richardson. “ComiXology’s line of creator-owned comics sits perfectly alongside the acclaimed creator-owned graphic novels that are the bedrock of Dark Horse Comics.”

“We were always hopeful comiXology Originals books would get into readers’ hands via comics retailers and book stores, and Dark Horse is a terrific collaborator to work with to do so, with an unmatched history of supporting creator-owned projects alongside unmatched distribution expertise. This deal fortifies the ability for these stories to reach customers like never before,” said David Steinberger, comiXology Co-Founder and CEO. “We’re thrilled to be working with Dark Horse.”

Through this deal, Dark Horse Comics will be responsible for distribution and fulfillment for the titles through Diamond Comic Distributors for comic shops and Penguin Random House for bookstores around the world. ComiXology Originals will remain available to be read digitally for members of Amazon Prime, Kindle Unlimited, and comiXology Unlimited and for purchase on Kindle and comiXology.

The comiXology Originals making their print debut in 2021 include:

AFTERLIFT, collecting the Eisner Award-winning issues #1-5 – For the first time in print!

Breaklands Volume One, collecting issues #1-5 – For the first time in print!

YOUTH Volume One, collecting issues #1-4–For the first time in print!

The Black Ghost Volume One, collecting issues #1-5–For the first time in print!

More comiXology Originals print editions will be announced at a later date.

“These are high caliber comics that will resonate not only in the comic shop stores and bookstores, but also with libraries across the country,” said Mark Bernardi, Vice President of Book Trade and Digital Sales at Dark Horse Comics.