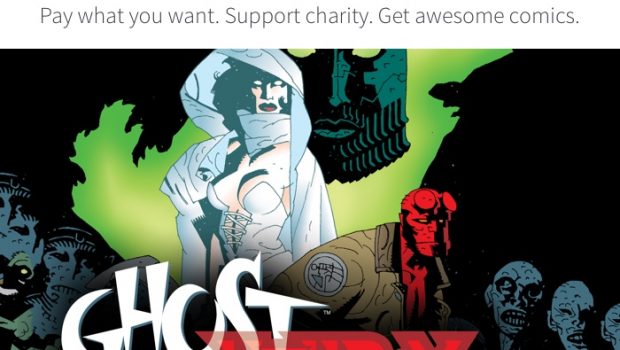 Milwaukie, OR—Humble Bundle and Dark Horse Comics have teamed up to launch the Dark Horse Comics 30th Anniversary Bundle today. Starting at 11 a.m. PDT, fans of the legendary publisher can pay what they want for over $400 worth of digital comics, all while supporting a great cause.

Fans who pay $15 or more will receive all of the above, plus Ghost Volume 1: In the Smoke and Din, Ghost/Hellboy Special, Deep Gravity, Empowered Volume 1, Milk and Cheese: Dairy Products Gone Bad, MIND MGMT Volume 1: The Manager, Plants vs. Zombies: Timepocalypse, Predator: Prey to the Heavens, The Massive Volume 1: Black Pacific, The Goon Volume 6: Chinatown, and King Tiger.

On Wednesday, August 17, look for eight additional volumes to join the bundle!

“Dark Horse has been committed to comics creators’ rights since the company’s founding. Needless to say, we strongly support the Hero Initiative’s great work in assisting comics creators in need. Teaming up with Humble Bundle to support and help raise awareness of the Hero Initiative is a perfect way to celebrate Dark Horse’s thirtieth anniversary,” said Mark Bernardi, Dark Horse’s VP for book trade and digital sales.

As with all Humble Bundles, customers can choose how their purchase dollars are allocated between the publisher and the charity. The Humble Comics Bundle: Dark Horse 30th Anniversary supports the Hero Initiative, though customers can also choose a favorite organization from a database of over thirty thousand charities.

“Humble Bundle has long been a great partner of Hero Initiative, and Dark Horse has been the gold standard for publishers who do things their own way for thirty years now. We’re happy and honored to be part of this great bundle of great Dark Horse Comics,” remarked Jim McLauchlin, president of the Hero Initiative.