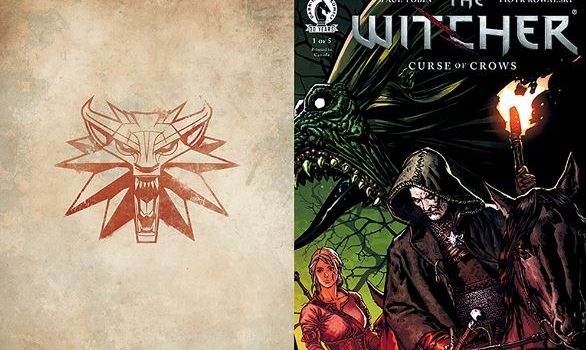 MILWAUKIE, Ore., (August 31, 2016)—Dark Horse and CD PROJEKT RED are excited to give The Witcher fans a special treat for attending conventions this year: a print edition of The Witcher: Curse of Crows #1! Originally, this issue was to be digital only and published on September 7, 2016, but Dark Horse and CD PROJEKT RED want to reward The Witcher fans for being so dedicated by releasing the issue early and providing a print copy! The printed first issue of the Curse of Crows series will have a special variant cover and will only be available for purchase at conventions. The special limited edition issue will first be available at PAX West from September 2 to 5, 2016.

The Witcher is CD PROJEKT RED’s flagship video game franchise and has sold over twenty million copies worldwide. The Witcher 3: Wild Hunt was named Game of the Year at the 2015 Game Awards. The Witcher: Curse of Crows is Dark Horse’s newest collaboration with CD PROJEKT RED, preceded by the comic series The Witcher: House of Glass and The Witcher: Fox Children, and various collectible figures and glassware.

Curse of Crows explores the dark and gritty world of the popular video game series. Geralt and Ciri are embroiled in a battle for revenge as they travel to Novigard while hunting monsters. During their journey, the Witchers save a young woman from a troll, but Geralt and Ciri quickly discover she is more than what she seems. Eisner nominee Paul Tobin (Bandette, Mystery Girl) writes Curse of Crows, Piotr Kowalski (The Steam Man, SEX) lends his illustration skills, Brad Simpson (Catalyst Comix, SEX) colors the series, and Nate Piekos (Umbrella Academy, Atland) letters it. The story team behind the game also co-wrote the series.

The Witcher: Curse of Crows digital series will have five issues total, with the first issue going on sale August 31, 2016. The trade collection goes on sale May 10, 2017.

“Dark Horse further cements itself as the publisher to turn to for well-executed comics based on video games.”—IGN

“The Witcher is a great series, with some great reveals. You should really get into it.”—Unleash The Fanboy