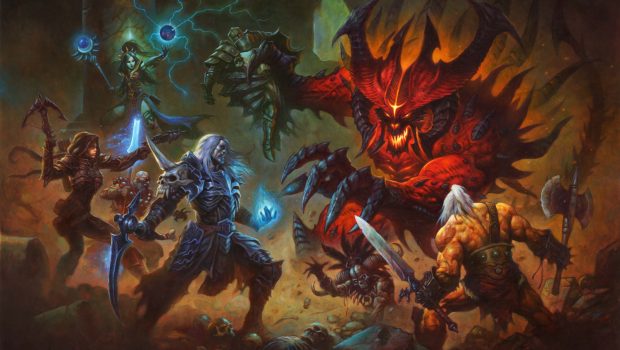 A Dark Hero Returns to Diablo III – Rise of the Necromancer Now Available!

Console gamers can now possess the ultimate co-op action-RPG in one complete package with the Diablo III: Eternal Collection™, available digitally at a special introductory price

SYDNEY, Australia—28 June, 2017—Sanctuary’s fallen warriors have long awaited this moment: the necromancer has finally returned to send them back into battle against the demons of the Burning Hells. Blizzard Entertainment today announced that the Rise of the Necromancer™ pack, which summons the iconic necromancer class into Diablo® III: Reaper of Souls®, is now available digitally in-game on PC and through the online Blizzard Shop, PlayStation®Store, and Xbox One Store.

Necromancers are grim spellcasters who draw upon the power of blood and bone and raise terrifying armies of undead minions from the remains of their vanquished foes. These brooding men and women are masters of the dark arts who seek to preserve the balance between the forces of life and death in Sanctuary—even if it requires detonating several thousand demon corpses along the way.

In addition to a new class, the Rise of the Necromancer pack contains a macabre assortment of curiosities to support any aspiring practitioner of forbidden magic, including:

Acolytes of the dark arts can also unearth the most closely guarded secrets of the Priests of Rathma by studying the Book of the Necromancer at Diablo3.com/Necro. This archive chronicles the shadowy history of the necromancers and contains a grimoire of their spells, runes, weapons, and armour—an ideal resource for anyone who plans to take the necromancer through the challenges that comprise the Season 11 journey, beginning 21 July AEST/NZST.

“We’re excited to continue our celebration of the 20th anniversary of Diablo by reimagining one of the community’s all-time favourite classes in the Rise of the Necromancer pack,” said Mike Morhaime, CEO and cofounder of Blizzard Entertainment. “We look forward to seeing a new generation of necromancers exploring Adventure Mode, discovering new character builds, and exploding corpses in Greater Rifts throughout Sanctuary.”

The Night of the Necromancer celebration kicks off today at 10.a.m AEST on Twitch as senior game designer Travis Day joins Nerdist’s Jessica Chobot as she raises hell on a new necromancer, streaming her play experience from a haunted location. After teaming up, Chobot will be left to fend for herself as she attempts to survive from dusk till dawn.

Console gamers who have yet to experience Diablo III can acquire a legendary treasure starting today in the form of the digital-only Eternal Collection™, which includes the Rise of the Necromancer pack, Diablo III, and the award-winning Reaper of Souls expansion for PlayStation 4 or Xbox One. This expansive all-in-one collection is a perfect jumping-in point for anyone who might have missed out on the definitive couch co-op gaming experience.

The Rise of the Necromancer pack is now available for Windows® and Mac® PCs, as well as on PlayStation 4 and Xbox One, for $21.95 AUD. The epic Diablo III: Eternal Collection bundle is currently available to PlayStation®Plus members on PS4 and Xbox Live Gold members on Xbox One through 3 July at a special introductory price of $59.95 AUD (reg. $99.95 AUD). On PC, newcomers to Sanctuary can take advantage of special celebratory savings of up to 50% off on Diablo III, the Reaper of Souls expansion, and the Diablo Battle Chest. Visit the Blizzard Shop for more information.

Diablo III: Reaper of Souls and the Rise of the Necromancer pack are fully localised in English, Brazilian Portuguese, European and Latin American Spanish, French, German, Italian, Polish, Russian, Korean, and simplified and traditional Chinese. To learn more, and to try Diablo III for free on PC, visit the official website at www.diablo3.com.