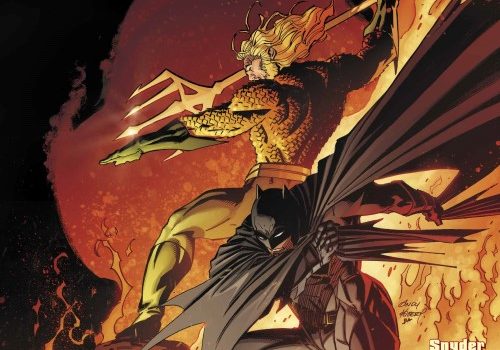 Summary: Dark Days The Forge #1 is a truly fun and epic read!

The next DC Comics epic is here, Dark Days The Forge #1 which is a Batman centric story and written by Dark Knight scribes James T Tynion IV and Scott Snyder. So as a darkness comes to the DC Universe, there is a secret that threatens the very fabric of the multiverse and heralds the return of a familiar and legendary hero. Furthermore, Snyder and Tynion fill the issue with some awesome Easter eggs, not to mention clues that go back to their own stories from Batman.

The story reintroduces Carter Hall (aka the Golden Age Hawkman) to the post-Rebirth universe as he recounts a tale from one his many lives about a metallic vessel crashing into the Earth. It is here where Tynion and Snyder commence their mystery with a wonderful link to the mysterious Nth metal. Fast forward to the present day and a research station funded by Wayne Industries somewhere in the Bermuda Triangle has noticed something very wrong with the Earth’s core with powerful seismic tremors.

‘… glimpses of something bigger, a mystery behind our lives, our story’
– Carter Hall, Hawkman

Although the scientists are doomed, they are rescued by Batman and Aquaman. Arthur questions Bruce about what he is hiding which is rebutted by our billionaire as to what are they hiding? Meanwhile Hal Jordan, Earth’s greatest Green Lanterns has been given a secret mission from Ganthet, one of the last Guardians of the Universe that a terrible truth is about to be unleashed on his planet.

Hal is led to Batcave, only to be confronted by Duke Thomas and upon further investigation, they try to piece together the mystery that Batman has been investigating as they are introduced to a very mysterious yet familiar voice. The voice informs Hal and Duke that Batman has been cataloging unexplained metals on the planet which have been present throughout the history of Earth with links even to the Court of Owls. Furthermore, three of the world’s most powerful artefacts… the helmet of Nabu worn by Doctor Fate, the trident of Aquaman and the gauntlets of Wonder Woman are also part of this mysterious family of metals.

We learn that Batman put together a ‘black-ops’ team that would operate without the knowledge of the Justice League or the ‘bat’ family called the Outsiders (Metamorpho, Black Lightning, Katana, Halo and Geoforce) to search for these metals. As the voice continues to recount the story, hinting that Batman is very close to finding the truth, it mentions that something else was dragged into this world and at the end of the book, we discover that this voice is none other than the Joker himself. This raises the questions why Batman imprisoned this Joker and where are the other two?

During the story Carter Hall has prophetic dreams about a dystopian world revolving around Batman and like the archaeologist he is, he starts to investigate the mystery, mentioning how the Nth metal that gave him his powers is linked to something bigger. Interestingly, Batman has been working in covert with Mister Terrific who reports of his time on ‘another’ Earth.

Batman also realises that something is askew with the world and seeks the aid of Superman at the Fortress of Solitude to help unlock an unlockable door that he placed in the Fortress of Solitude. Although Clark cannot aid Batman, they are joined by New God Mister Miracle who helps him unlock the door that leads to the Tower from Crisis on Infinite Earths and Infinite Crisis which also imprisoned the Anti-Monitor. With a warning from Mister Miracle, Batman finally uses this device in order to help him unlock the secret that has been plaguing him for years.

‘You’re just another couple of pieces in Batman’s puzzle. Just like me’
– The Joker

Wow… Dark Days The Forge #1 is a perfect way to start the next DC Comics blockbuster which is filled with cameos galore such as the Outsiders, Black Hawks, The Immortal Men and even a glimpse of the lives of Hawkman. It’s also a well-written book with James T Tynion IV and Scott Snyder really capturing the essence of the characters well, not to mention giving the reader plenty of questions as well. Complementing the story is the excellent artwork by Jim Lee, Various, John Romita, Jr. and Andy Kubert which captures the world of DC Comics and helps lay the foundation for some very interesting things to come! 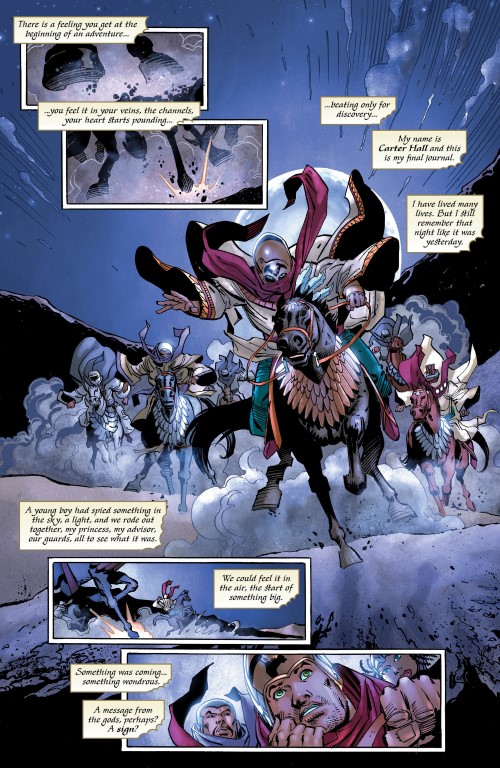 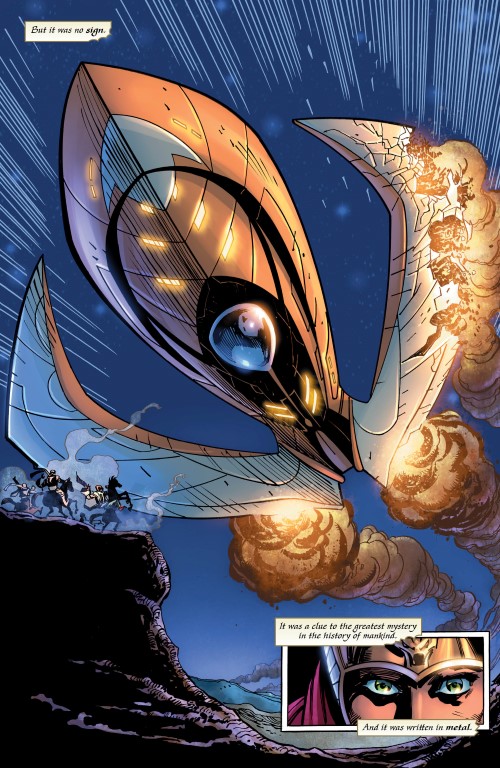 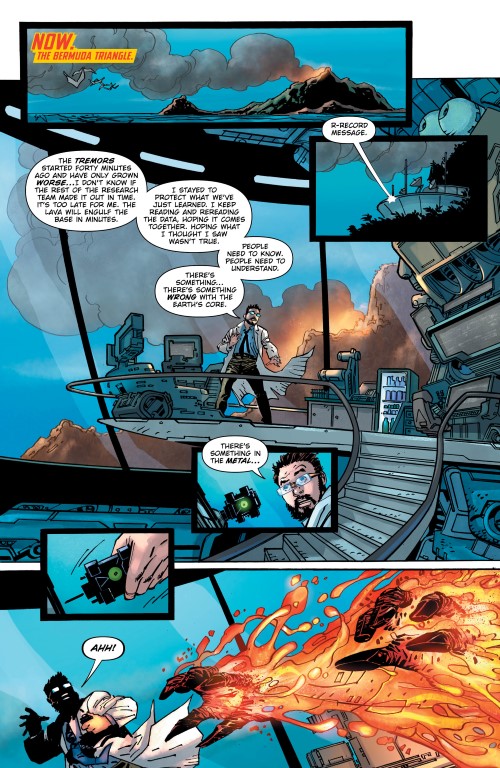 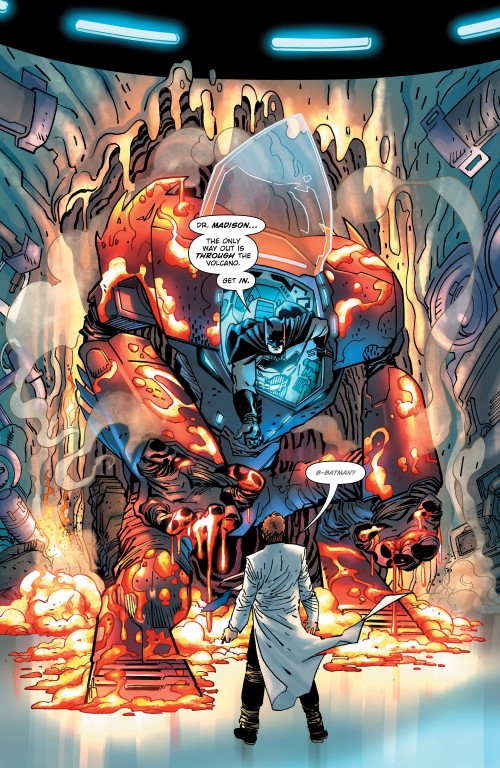 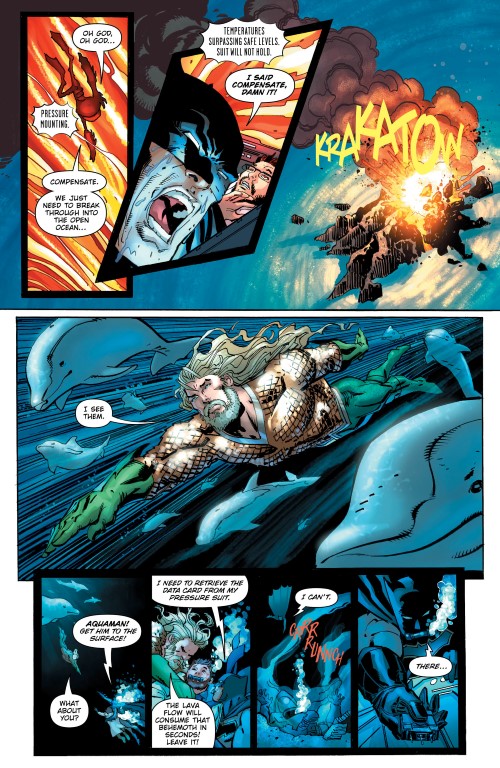 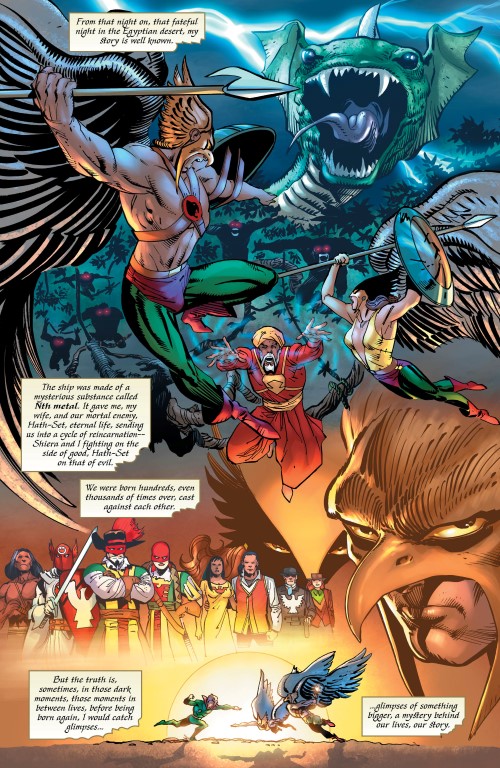 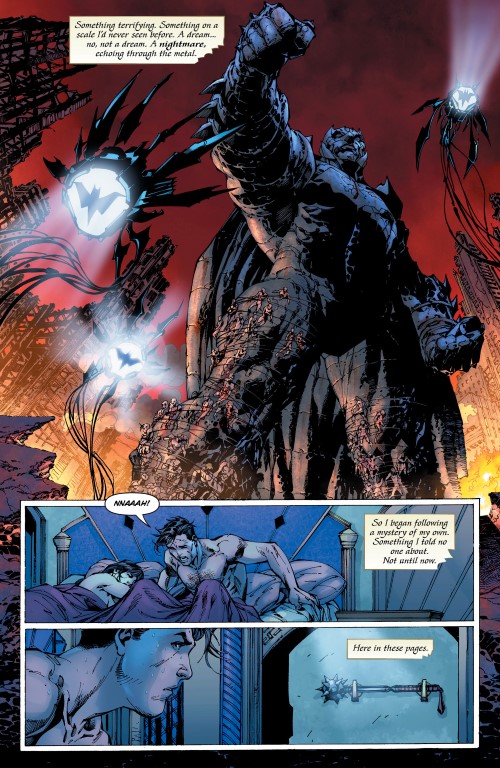 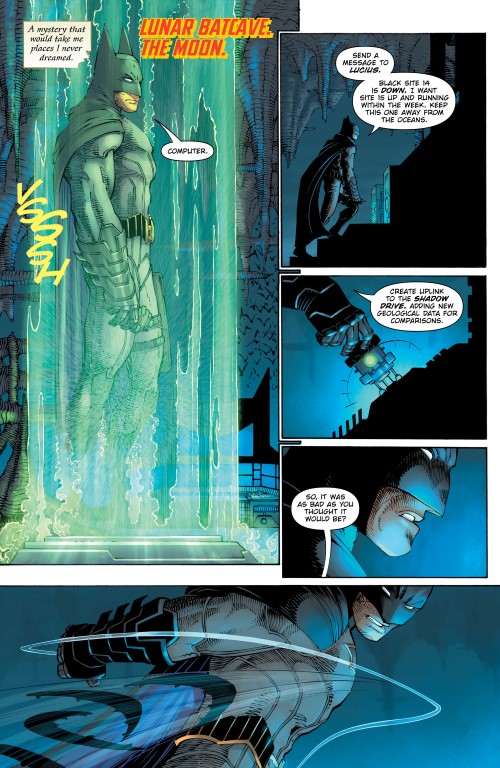 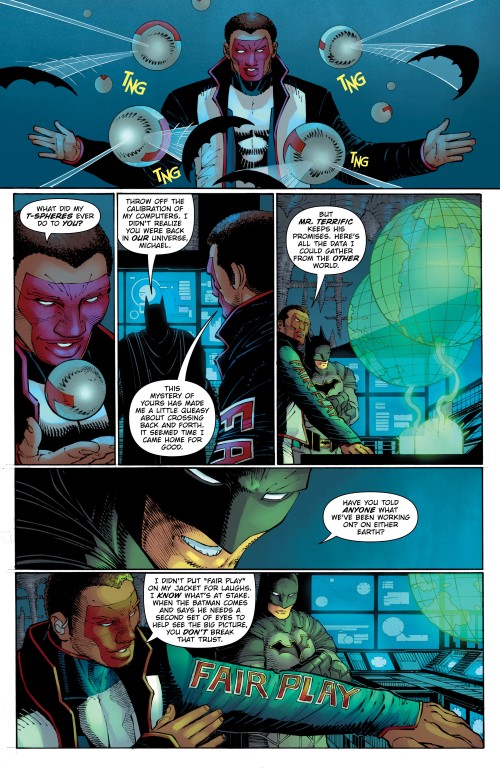 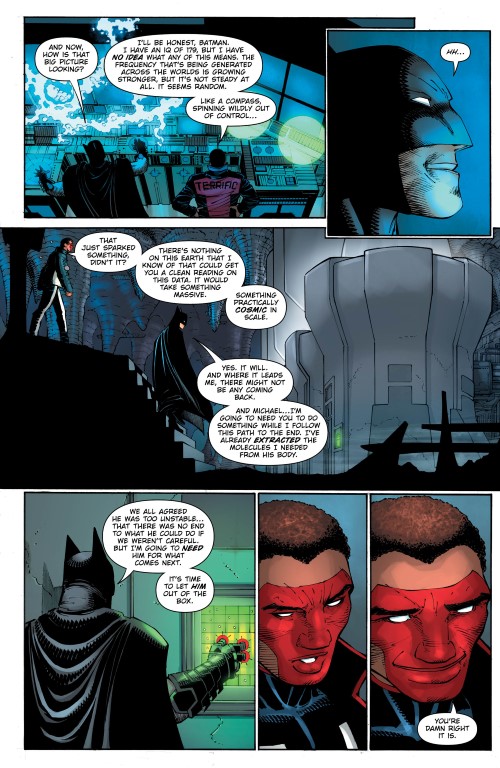 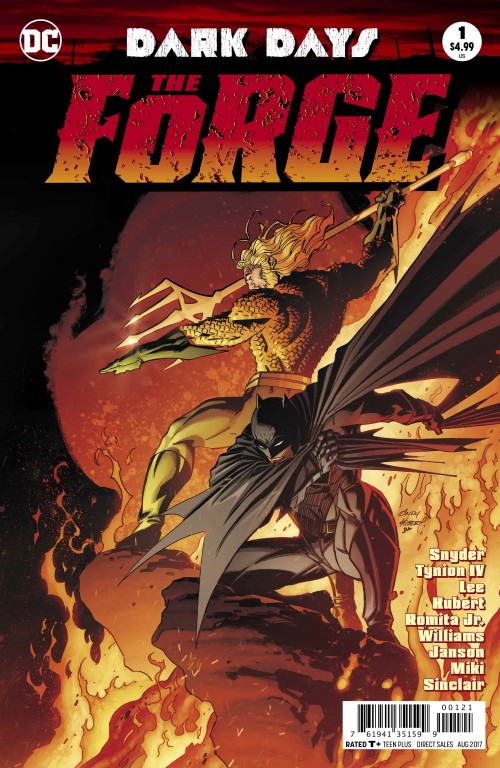 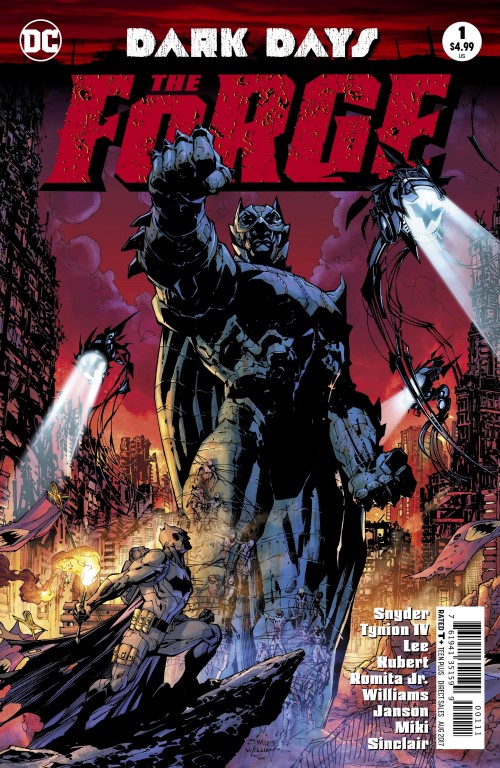 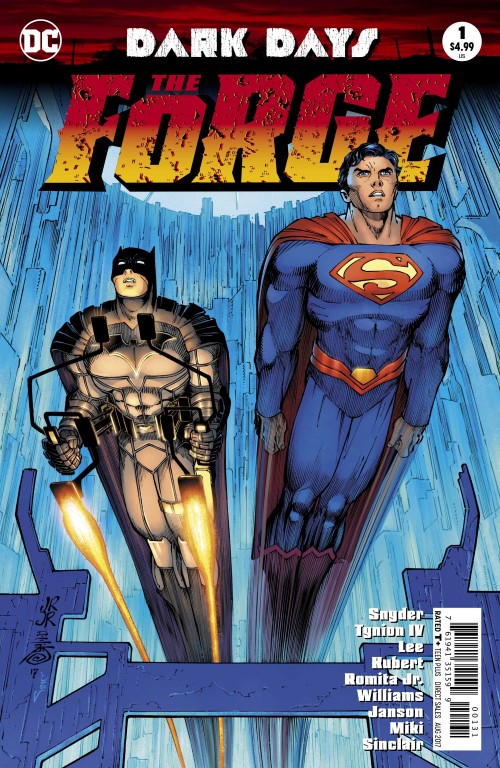