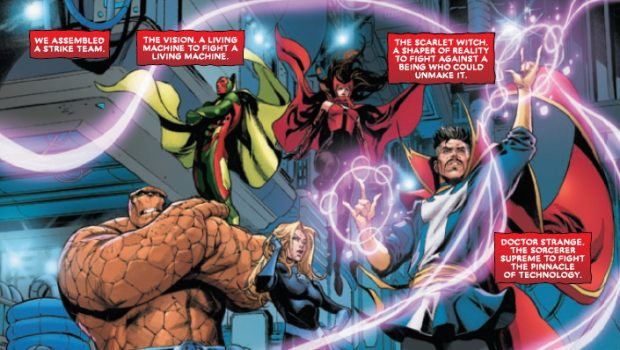 Summary: The world has already ended but in this series you get to see what happens after. Worth a look if you want something different.

The end is the begining

When an ancient evil returns the Watcher warns the Avengers the earth is doomed. All the Avengers, X-men, Spider-People, Fantastic Four and others come together to think up a plan and try and stop what is happening. The problem is it works too well and the earth is left in darkness. A new battle awaits.

Given the amount of universes and branching storylines in Marvel universe it is interesting being around when they start one as the point where this one starts is usually when most other stories end. The world has already “ended” but people continue to survive.

From what I have been told alternately powered Iron Man suits are almost retro these days as that concept has been used a lot by this point. Iron Man does not really seem to be one of the main characters in this story.

This does have a lot of different characters from the Marvel universe in it and I would recommend at least having a look at it if you want a different sort of story than usual and not just them fighting the same bad guys as they regularly do.