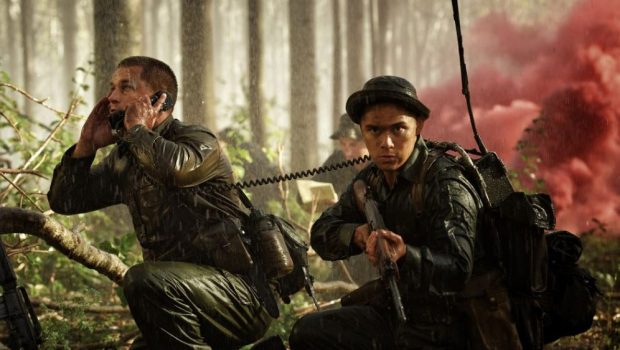 The Vietnam War film Danger Close premiered at this year’s Sydney Film Festival. The screening was followed by a Q&A session with the film’s director, Kriv Stenders. The first person to comment was a man who spoke with a noticeable quiver in his voice. He conceded that it was a very good film but stressed the importance of movies not glorifying warfare or constructing myths about soldiers. It was the most intense and emotional moment of the evening.

Stenders said that he respected the man’s opinion but did not feel that Danger glorified combat. He argued his film is apolitical and provided comfort to the families of veterans by showing what their loved ones experienced. The director’s response was met with applause. However, the truth lies somewhere in the middle as there is validity to the man’s criticisms.

The film is set in 1966 and dramatises the battle between the Viet Cong (VC) and the 1st Australian Task Force. The conflict was undertaken in a rubber plantation near Long Tan, located in the Phuoc Tuy Province of South Vietnam. Over two thousand VC soldiers prepared to attack the a newly established Australian base at Nui Dat. The battle resulted in the deaths of eighteen Australians and over two hundred VC soldiers.

Before the start of the conflict, the film introduces Major Harry Smith (Viking’s Travis Fimmel). He once oversaw a commando unit and is displeased with having to lead rookie soldiers. He is aggressive with how he treats his men, including Private Paul Large (Daniel Webber), who accidentally discharges his weapon. When Harry requests re-joining his old unit, Brigadier David Jackson (Richard Roxburgh) dismisses his claim and tells him to lead his men.

While searching for a patrol, Harry and his soldiers must withstand devastating waves of VC soldiers. The Australians are aided by the support of their artillery guns and powerful but infrequent air support too. Simultaneously, Jackson is reluctant to employ APC vehicles because he is worried that if they are lost it will compromise the safety of the entire base.

Kriv Stenders has developed an uneven body of work across both film and television. Lucky Country (2009) was a bizarre and convoluted film about the Australian outback. Red Dog (2011) is still his best feature because of the quality of the script and its vibrant personality. The sequel, Red Dog: True Blue (2016), was harmless but did not share the same success. 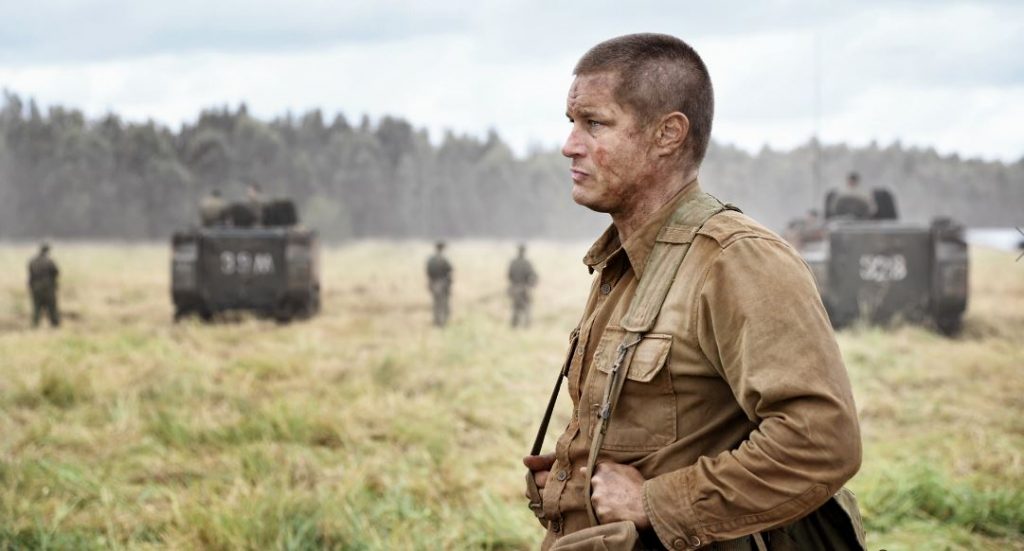 Stenders’ efforts here are functional at best. The pre-battle scenes are the most effective, such as when Private Large and a fellow soldier share a beer on guard duty. The anticipation that one of them might be killed is highly suspenseful. There is also an effective jump-scare when his weapon is accidentally discharged. Less certainly proves more when creating tension.

While efficiently made, it was shot in eight weeks in Queensland, Danger’s filmic style lacks specificity in its sound and images. There is one attractive moment though, which includes a wide angle shot of a group of soldiers crossing a stream of water. The way the light protrudes through the trees and falls onto the water is naturalistic and beautiful. The film’s colour palette is mostly khaki and tanned to match the dried-out woodlands of the plantation, and smoke effects are used to capture the fog blanketing the trees and affecting visibility.

Otherwise, Stenders is only dedicated to finding stylistic ways to invigorate the combat. The camera presses forward in single takes to frame soldiers lying prone with their guns ready. Digital trickery is utilised, such as the camera rotating above the trees and bombs being viewed from top-down shots, and there are clichés images of weapons being unloaded in slow-motion. He must think of ways to hold our interest since the combat forms the bulk of the film’s content. 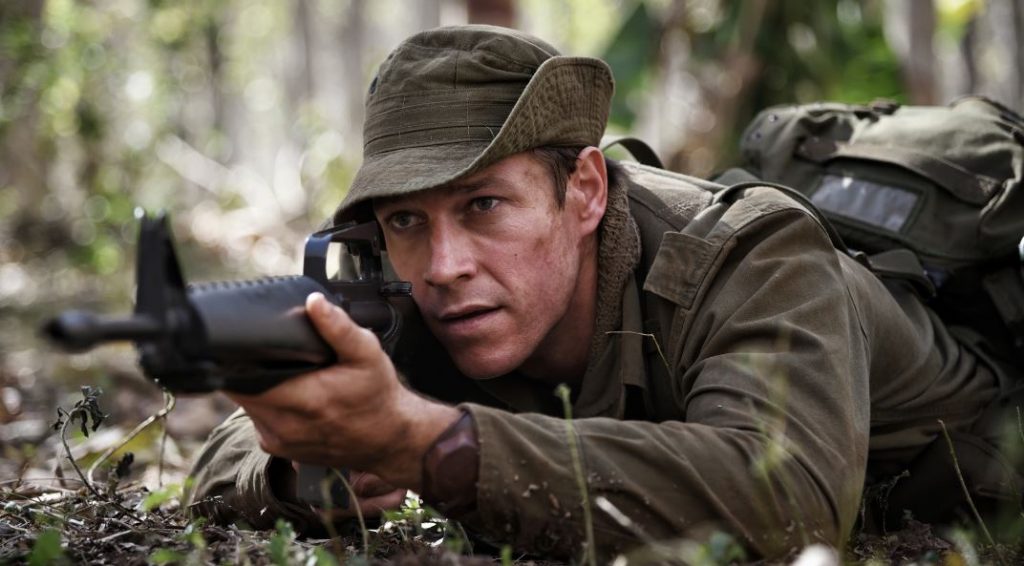 This busy but inconsistent style fails to counter the increasing monotony of the action. The tension is less effective the longer the film continues. It jars how frequently the soldiers relax momentarily only for a surprise shot to resume the action again. Meanwhile, hard cuts between scenes are abruptly edited and the use of the Nancy Sinatra song ‘These Boots Are Made for Walkin’, ala Full Metal Jacket (1987), is inexplicably pasted over a scene.

It is a minor miracle that Stenders restrained himself from using Creedence’s ‘Fortunate Son’ but still odd that ‘Boots’ is the only pop song on the soundtrack. The film’s one female character, singer Little Pattie (Emmy Dougall), performs on stage for the troops, which ensures music is relevant to the story. Though after successfully being extracted from danger, she never features again in the narrative.

While combat heavy, the characters in Stuart Beattie’s script are one dimensional and lacking strong backstories. The side roles would be completely indistinguishable too if not for the battalion of former Home and Away stars on show. The only semblance of development involves Harry becoming more loyal to his men after bullying Private Large. It is a lame imitation of the famous ‘I’m funny?’ scene from Martin Scorsese’s Goodfellas (1992). His performance wavers inconsistently between being unhinged early on and then emotionally affected by the loss of men. 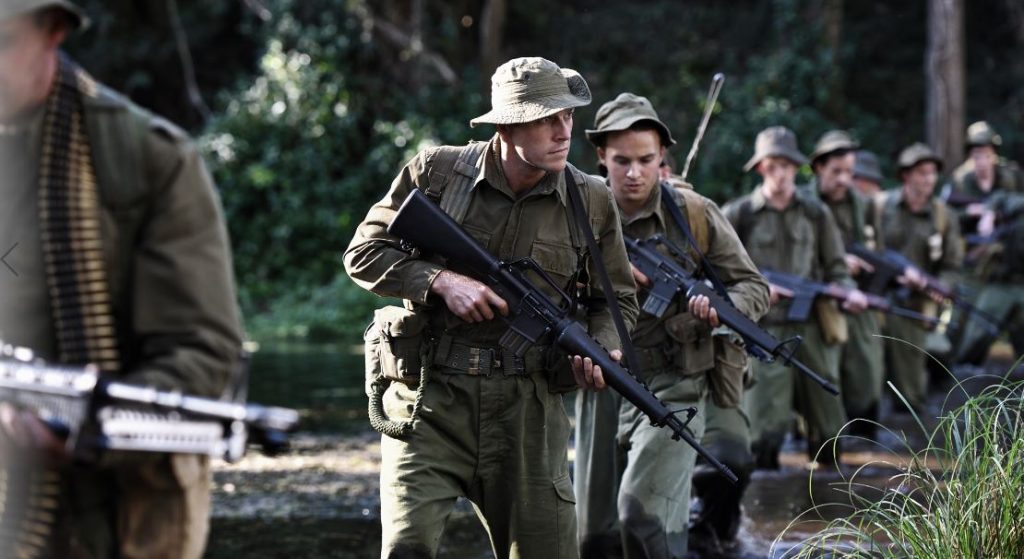 The other characters are underwritten stereotypes: the scared young kid, the soldier with a fiance back home (fatal), and a superior too remote from the action to understand the dangers. Richard Roxburgh solidly portrays Jackson as an intense and stubborn Brigadier. Yet the VC soldiers are merely cannon fodder and granted no humanity. The only trace of life is when two female soldiers carry their wounded to safety and opt not to shoot an Australian trooper.

If Stenders developed the characters with nuance it would dispel his supposed impartiality. He believes his film is apolitical and respectful of the Australian soldiers who fought and died. However, creating an apolitical story about one of the most heinous wars in modern history is an impossibility. Stenders’ reliance on combat narrows his thematic goals and indirectly creates a political construct. Danger is about Australian men learning to become better, more resilient soldiers to defeat the enemy.

The story’s tension is whether Harry can co-operate with his own men. It dramatises his difficult choices, including calling in an airstrike close to his men, to turn the battle. Jackson must also trust his troops and not withhold the most efficient machinery for killing the VC. These are not progressive or modern ideas. The point is amplified by the fact that Vietnam is now viewed as a disastrous and unnecessary war in a period of change and upheaval. 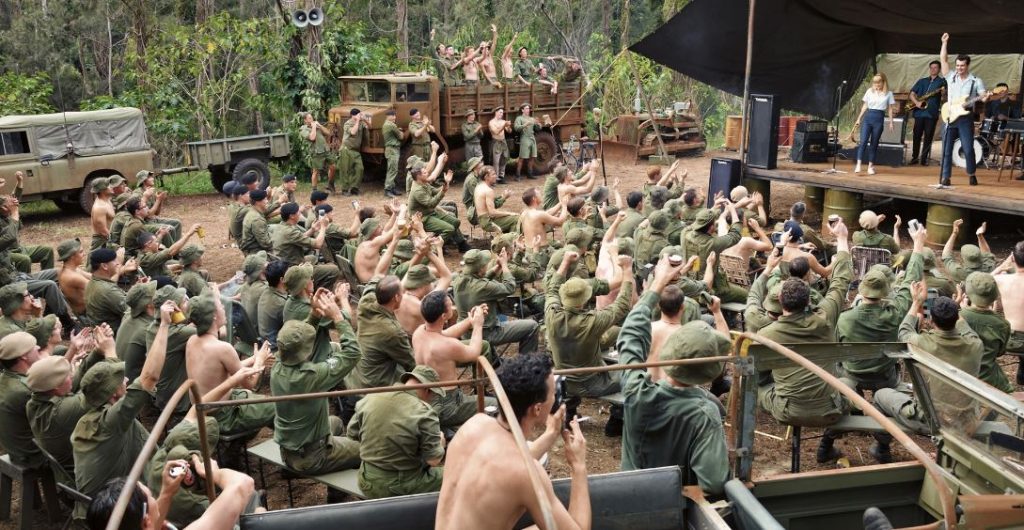 Danger is like Saving Private Ryan (1998) an expression of man’s dedication to warfare and country, where combat strengthens male bonds and nationalism. It is irrefutably a pro-combat movie masquerading as being ‘apolitical’ or ‘unbiased’ and lacking purpose as to why this story needed to be dramatised when it was already explored in Damien Lay’s 2006 documentary.

It takes courage to show how war destroys people and impacts upon families once the guns are empty and mateship has faded. It is a reality most want to ignore. Many films have explored the personal traumas that erode the myths of war. Two recent examples include Clint Eastwood’s wartime features Flags of Our Fathers (2006) and Letters from Iwo Jima (2006).

Both dramatised post‑combat traumas and the duality of warfare by humanising the Japanese soldiers. In George Clooney’s comedy-drama miniseries Catch-22 (2019), war is viewed as a nonsensical and contradictory cycle of madness and violence. There are many ways to explore war besides combat, but Danger takes the safest and most formulaic route. 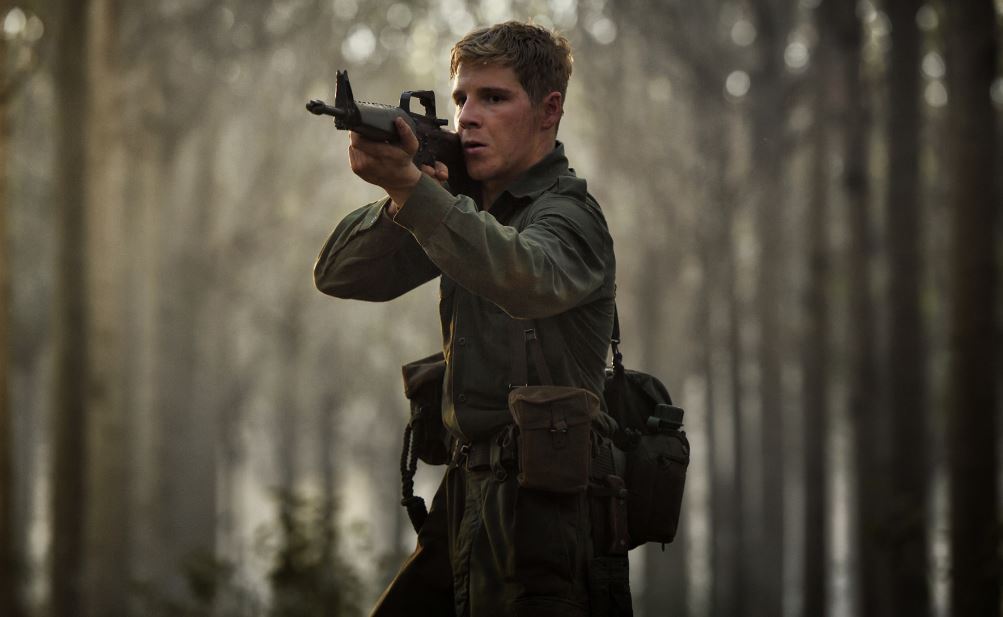 The closest it comes to creating a meaningful statement is text at the end stating that both sides claimed victory and that the soldiers were not properly acknowledged by the Australian government. Does Stenders still think he’s apolitical after this? Otherwise, Danger is solely interested in resilience and military hardware. The characters are not developed enough to be shown outside of combat.

It recalls the adolescence of Michael Bay’s 13 Hours: The Secret Soldiers of Benghazi (2016), where the allegedly ‘unbiased’ filmmaking involved bludgeoning audiences with combat scenes as a tribute to servicemen and briefly criticising bureaucrats for ignoring them. The most potent way to honour soldiers is to portray them as individuals with different viewpoints about how war affects them before they can be transformed into dutiful killing machines.

As a ground-level experience of Long Tan, Danger is occasionally unnerving because of its proficient combat scenes that depict the dedication of the Australian troops and their proximity to certain death. However, the film’s supposedly apolitical stance dilutes the depth of the story and characters. By limiting the film to relentless set pieces, Stenders has created a problematic, Bay-esque view that men are strengthened by combat and violence. 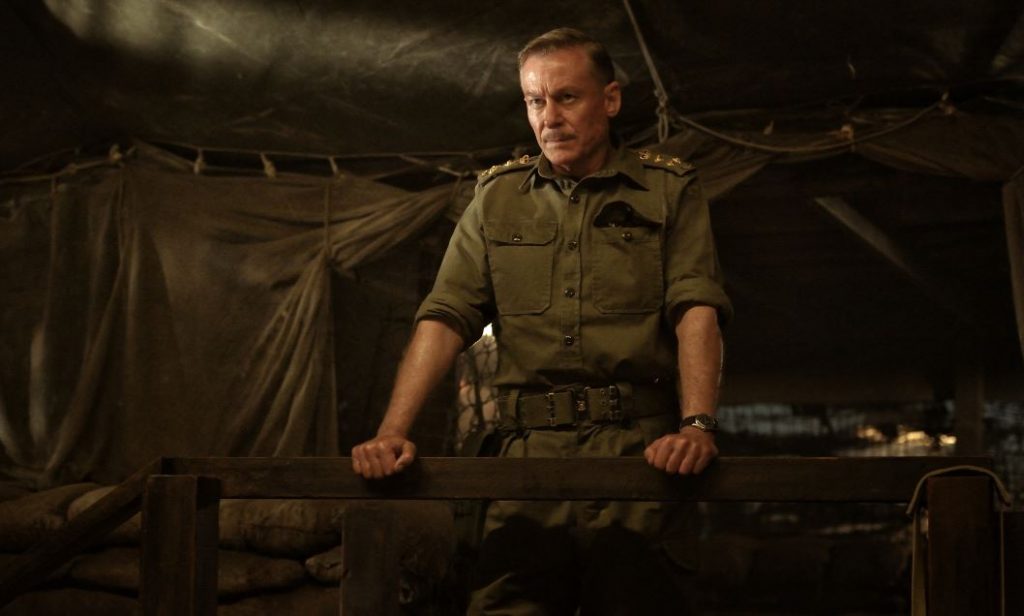 The tension of the soldiers being unrecognised for years could have been dramatised but instead the characters remain undercooked. Consequently, it is an adequately made action film, but the grisly violence is numbing rather than emotionally rewarding. At least there was one man who had the courage to speak up and remind us of how damaging war is.

Summary: It is an adequately made action film, but the grisly violence is numbing rather than emotionally rewarding, and the supposedly apolitical stance dilutes the depth of the story and characters.