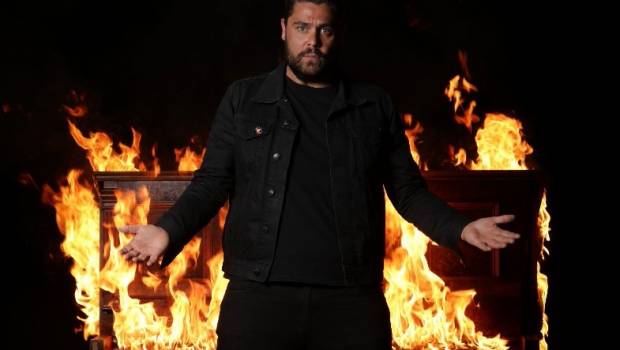 The notion of slowing down isn’t particularly suitable when describing Dan Sultan, who today announces he will hit the road for a run of intimate theatre shows throughout regional and metro centres from March through to June. The Killer Solo Tour will see the Melbourne musician strip things back to basics – just Dan Sultan, his piano and guitar – for a 18-date tour taking in Hobart, Wollongong, Townsville and plenty more!

Each intimate and acoustic performance will see Sultan reimagining all of his most recent release, the stirring ARIA #5 debuting, critically acclaimed Killer (out now via Liberation Records), including singles ‘Hold It Together’, ‘Kingdom’, ‘Magnetic’  and fan-favourites ‘Cul-de-sac’ and ‘Reaction’. In addition fans will be treated to a handful of classics from his decade-long back catalogue (expect hits from Blackbird, Dirty Ground, Get Out While You Can and Homemade Biscuits). Tickets are on sale this Thursday 25 January.

To coincide with the details of the Killer Solo Tour, Sultan has also revealed initial details for a very special project he is working on. The Melbourne musician is teaming up with friends Camp Cope, A.B. Original, Meg Mac, and Dave Le’aupepe from Gang Of Youths to rework a selection of songs from Killer. Sultan says of the project, “I can’t wait to hear the reworked versions of my songs from some of my favourite artists.” More details will be uncovered soon!

Adding to the celebrations, Dan Sultan has also signed a deal with progressive US label AntiFragile (home to Tia Gostelow, Eden Mulholland and label mates British India) who will release Killer in the States on Friday 26 January.

President of AntiFragile Tom Sarig expressed his excitement of the signing, “We feel very fortunate to have just signed Dan Sultan. Dan is an incredibly talented, unique vocalist and songwriter who I think can have a worldwide breakthrough with us. His songs are heartfelt and emotionally real and urgent. I got chills the first time I heard ‘Kingdom’ and we are overjoyed to be working with him.”

With three exciting undertakings on the very near horizon, it’s safe to say there is certainly no stopping Dan Sultan in 2018.