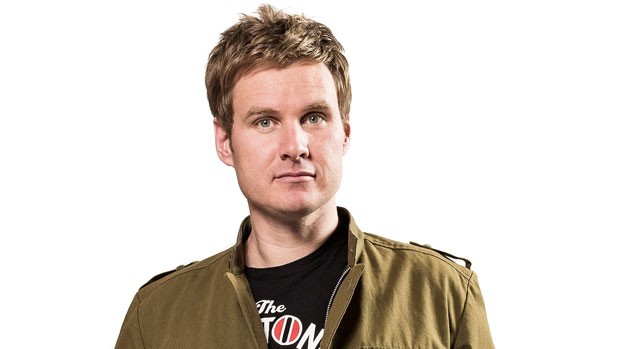 It’s always good to see a new comedian at the Melbourne International Comedy Festival and Queensland’s Damien Power was recommended to us. So having checked him out on YouTube, I must admit that were eager to see him live, however we had no idea what to expect in his new show “Sell Mum Into Slavery” and needless to say he delivered a true laugh fest with a layer of existentialism thrown in for good measures. He is definitely the Australian guru and philosopher of comedy!

So what exactly is Damien Power’s new show about? The main theme of Sell Mum Into Slavery (you even get a guide before the show starts) is about the evolution of humans and even though with the help of tools, we have cemented ourselves on the top of the food chain, we’re not really on the top. Damien discusses an encounter with a man who wanted to attack his car as he screamed at our comedian “Come at Me!” to how footballers are paid to use their primate part of the brain and that you would never see an astrophysicist physically attack another person. It all stems from stupidity!

Damien also states that his new show came to him in a dream where he met this higher being who helped him put things in perspective after depression and this creature may or may not feature on the front of his guide. Let’s just say it’s an interesting creature as is the comment by Friedrich Nietzsche on the cover as well! He even discusses Reclaim Australia and how to get them off the planet in this classic double twist that makes them the refugees as they attempt to visit the “Southern Cross” in space.

However as he puts all this craziness down to the fact that mankind has only been around for a short time compared to the age of the universe, he theorises that we are still reliant on our monkey lizard possum brain that conflicts with who we are. So as Damien discloses his recent break-up, what it means to be a father and how romance is not the easiest thing to do, he had the audience in hysterics and even draws a few of them into his show, particularly the lady behind us who got a little too excited from his jokes and the one-off Heckler who yelled “Pharlap”. Nicely played Mr. Power!

Damien Power Sell Mum Into Slavery is a very amusing journey into not just the mind of this comedian but also ourselves as he takes us on this almost postmodernity journey of humour and how strange the human race really is. Best of all, Damien gives 110% and his comedy is very infectious as you laugh, cry and have a fantastic time at his new show, “Sell Mum Into Slavery”.