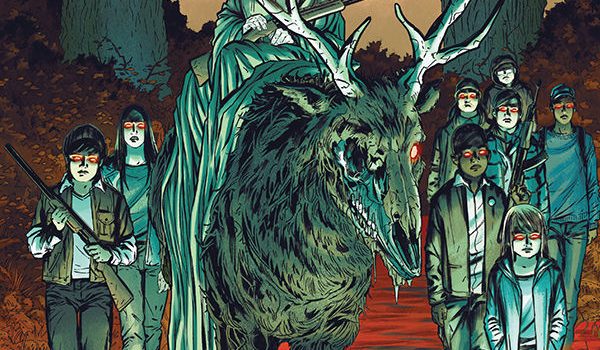 Summary: Never thought the narrative would develop this way. Daisy #3 totally ups the second issue in the series, and the mystery behind Conor’s disappearance is finally coming to light. The mother and son meeting only serves to deepen the narrative’s horrific and dark undertones.

Daisy #3 opens with an attack on the nearby town. The attack is done by Daisy’s creations, the dead animal carcasses she brought back to life in the previous issue. Lindsay argues that it feels wrong, to kill the town’s people as a distraction. But Daisy counters back, asserting that the deaths are necessary to earn the Creator’s forgiveness. The only proof she needed was the resurrection of Lindsay, as the group, Daisy, Lindsay, and some children come to a church. While inside the church, the mystery around Conor’s disappearance is finally solved.

But there is a problem. Conor doesn’t want to go back home with his mother, instead choosing to stay for the children. He also has some strange markings and tattoos on his body. We learn of the children’s motivation for killing Father and the town’s people. Conor reveals that Father is lying to them wants to use them as conduits for ancient spirits once resurrected. The writers further reveal that there are even more children who have suffered under Father’s actions.

The encounter with these children is what finally manages to convince Lindsay to take Daisy and Conor’s side.Back at the house, we learn from the Sheriff that Father is immortal, but it will be a while before he is back to his former self. It seems that the town knows about what is happening to the children, and is okay with it. Back at the church, the children complete a ritual, as the final sacrifice to the Creator. However, everyone disappears, leaving Lindsay alone in the cave where the ritual is taking place.

Daisy #3 continues the horror and gore seen in previous issues. The introduction of Conor to the story’s narrative adds to its mystery, and I’m left wondering what role he plays. At the same time, we notice Daisy’s deformed body has similar markings to Conor’s and some of the other kids at the church. In the second half of the comic, we are also introduced to what seems like a cult, all led by Daisy’s visions of The Creator. The children beseech the deity to deliver them from their afflictions, but why does the whole town have to die? And what does the sacrifice has to do with Lindsay being the chosen one? There are a lot of questions, and honestly, I’m excited to see what happens in the next issue.