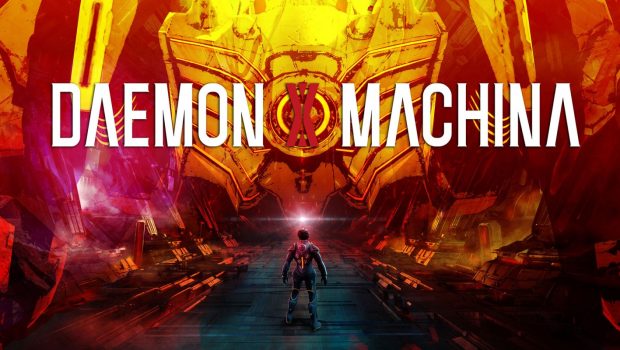 Summary: Daemon X Machina is a playable mecha anime that sucks you into its world

You know that trope in mecha anime where the protagonists stand stoically in their mech suits on the edge of a cliff and exchange dialogue about the upcoming battle as they survey the area below? I found myself recreating one of these scenes organically during an early mission in Daemon X Machina. And it was in this moment that I realised why I was having so much fun with this game: if you allow it to, Daemon X Machina will make you feel like a character in your own mecha anime. How enjoyable this is for you will really depend on how much leeway you’re willing give, in order to let this magic happen. 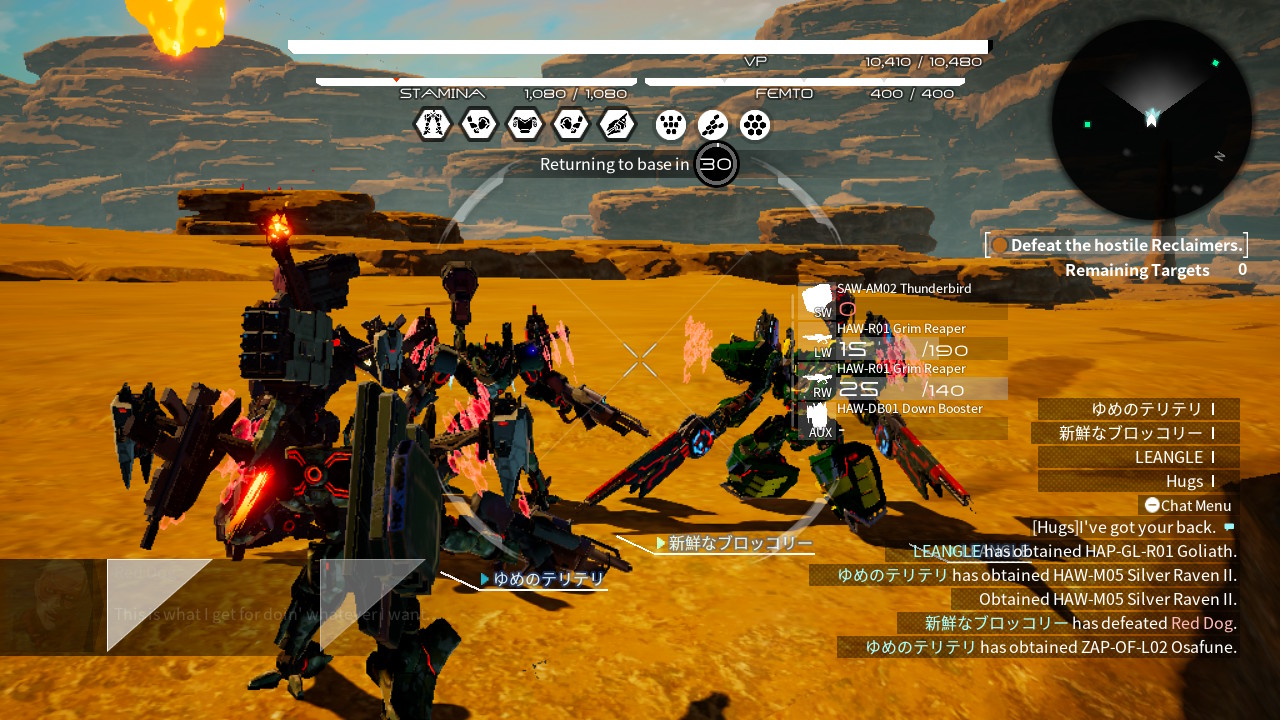 Heads up: the following paragraph describes the narrative basis for Daemon X Machina and contains almost too many ridiculous anime lore pronouns for any sane person to keep track of, but I’ll try my best. Daemon X Machina is a third-person shooter where you take on the role of an Outer – a special type of human imbued with a mysterious essence called Femto that was produced when the moon collided with earth and wiped out most of humanity. This Femto also caused many of the world’s AI machines to turn against the remainder of humanity. As an Outer, you have the ability to pilot Arsenals (read: mechs) and are able to take on mercenary work for an organisation called Orbital who coordinate missions requested by a conglomerate of mega-corporations that rule the various remaining sects of humanity. 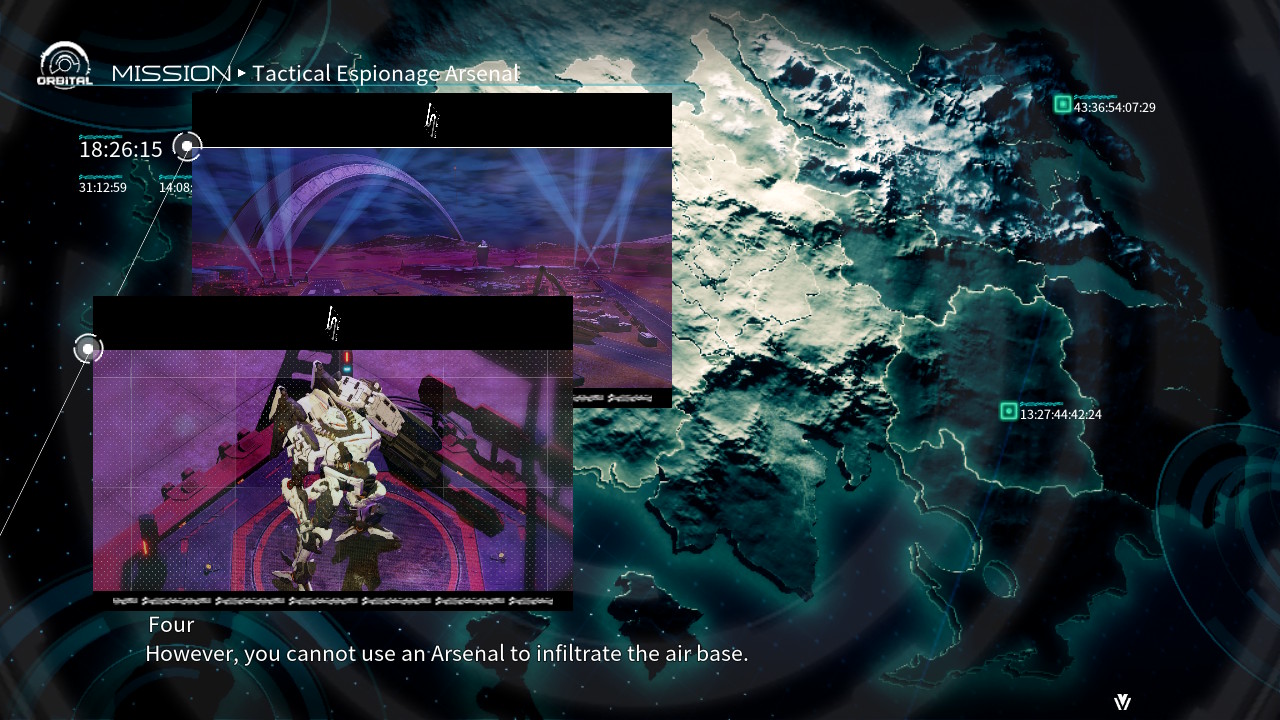 If your eyes haven’t completely glazed over at this point, there’s a good chance you will appreciate Daemon X Machina’s deep lore. For everyone else, prepare to button through hours of fully-voiced cutscenes and dialogue exchanges filled with these absurd terms thrown around by wacky characters with names like Grief, Rogue Cinderella and Guns Empress. The experience is highly reminiscent of Metal Gear’s hyper-serious tone in the face of absurdity, crossed with the philosophical musings tossed around in Neon Genesis Evangelion. Personally, I really enjoyed the story and world building presented in Daemon X Machina when I stopped asking questions and just went along with this absolute rollercoaster of a cheesey anime plot. 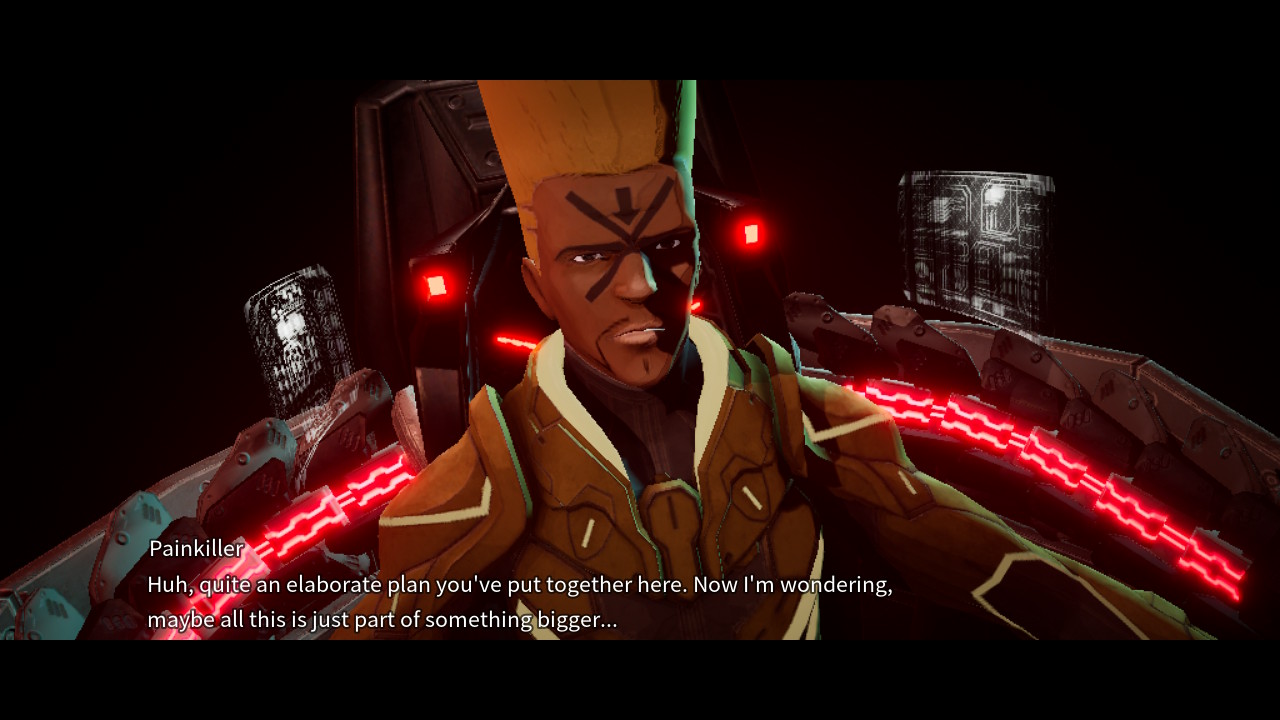 In terms of gameplay, Daemon X Machina lives in the middleground between a traditional third-person shooter and the classic arcade mech battle arena games like Virtual On. You have direct movement control over your Arsenal with the left stick, while the right stick controls the camera and a large circular crosshair. As you approach an enemy, if you keep them within this large crosshair they will become locked-on by your weapons system. When the enemy is locked-on, you can attack with whatever weapon you have equipped in your right hand, left hand and shoulder slot (mapped to the right trigger, left trigger and left bumper accordingly). The B button is used to jump and activate flight mode when held down, while the right bumper is used to activate a speed boost that is limited by a stamina meter, which recovers when not in use. 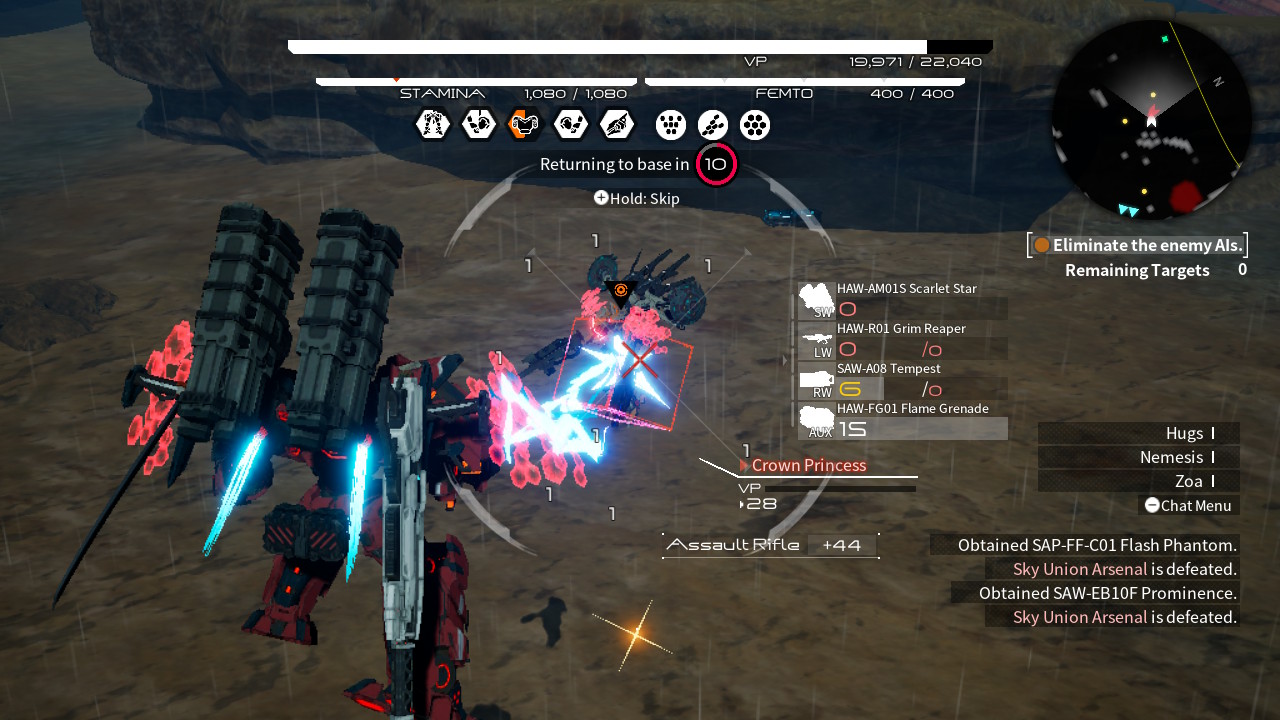 The above screenshot is captured mid-mission and gives you a good idea of what you’ll be looking at for the majority of the game. The HUD is completely cluttered with icons, numbers and meters, which may seem overwhelmingly distracting at first, but after a few missions you’ll soon begin to rely on each of these icons and meters just as a true mech pilot would. Once you feel comfortable with the HUD, you’ll find yourself completely immersed in the role of an Arsenal pilot. You’ll find yourself performing evasive manoeuvres by instinct when you see the warning that a heat-seeking missile has targeted you. You’ll feel a rush of excitement as you divert power from your shields to your boosters in order to chase down a fleeing enemy, and you’ll feel like an unstoppable powerhouse when you holster your weapons in the middle of a fight to reveal two huge, glowing swords. 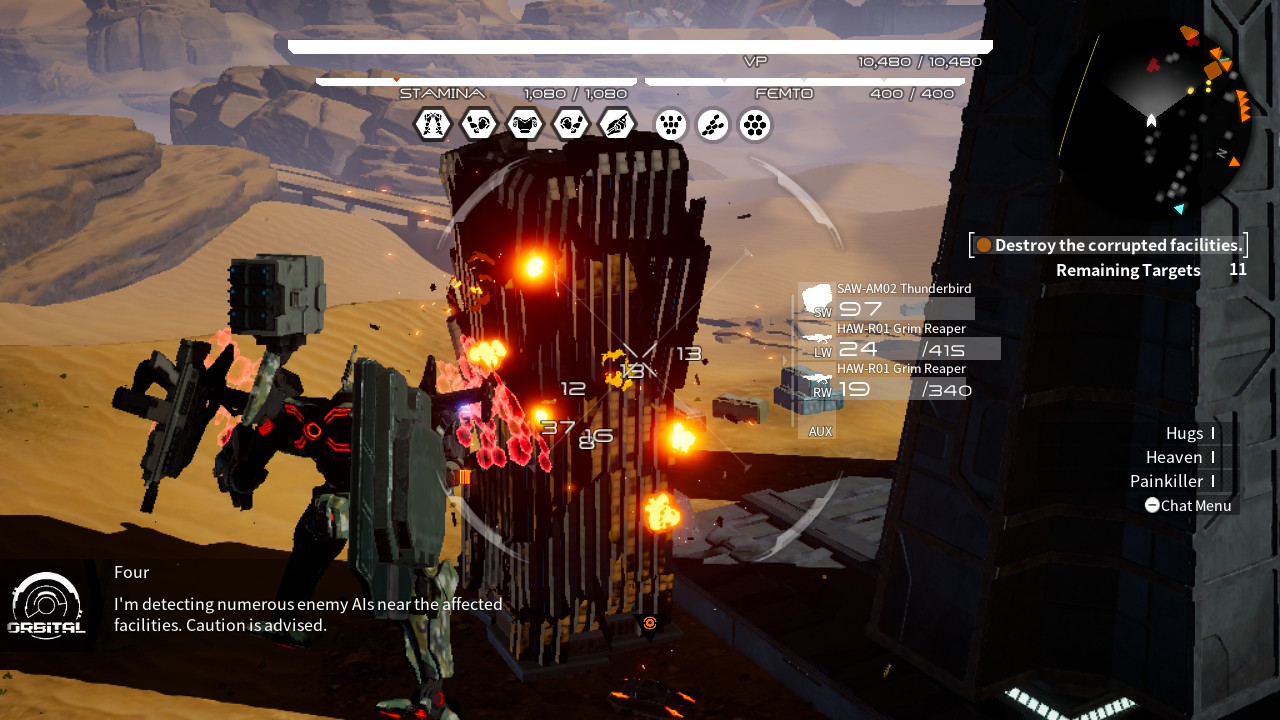 All of these actions will be used reflexively during fights, particularly when battling other powerful Arsenals, which means you’ll probably be holding your Switch in a rather uncomfortable claw-like position for the majority of the time if you’re playing in handheld mode. However, gameplay in Daemon X Machina is broken up into missions that usually take anywhere from 5-15 minutes to complete so there’s plenty of time to let your hands recover while you spend time in the hangar swapping out new equipment, customising the look of your Arsenal, purchasing body mods to increase your stats or buying ice cream at the in-house parlour to temporarily boost certain stats during the next mission. 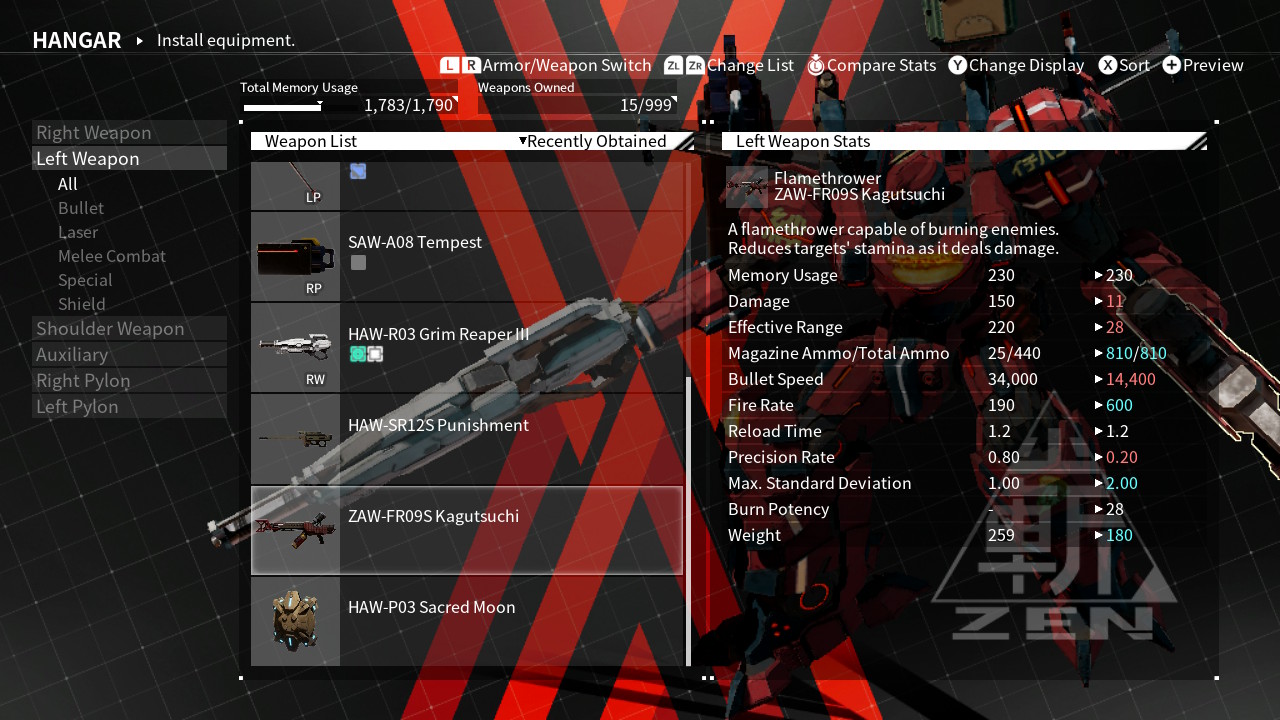 Daemon X Machina goes to great lengths to make you feel immersed in its anime world, but what makes it so successful is the game’s excellent sense of style – both visually and audibly. The game utilises a gorgeous ‘cel-shaded-esque’ visual aesthetic (reminiscent of Breath of the Wild), which combines highly detailed models with gorgeous visual effects that are bursting with colour. The Arsenals look about as cool as gigantic mechs could, and there’s a great sense of scale and power to their design. There’s also an impressive variety of awesome sci-fi environments that always makes entering a new battlefield feel exciting and reflects the game’s dedication to its lore and world-building. 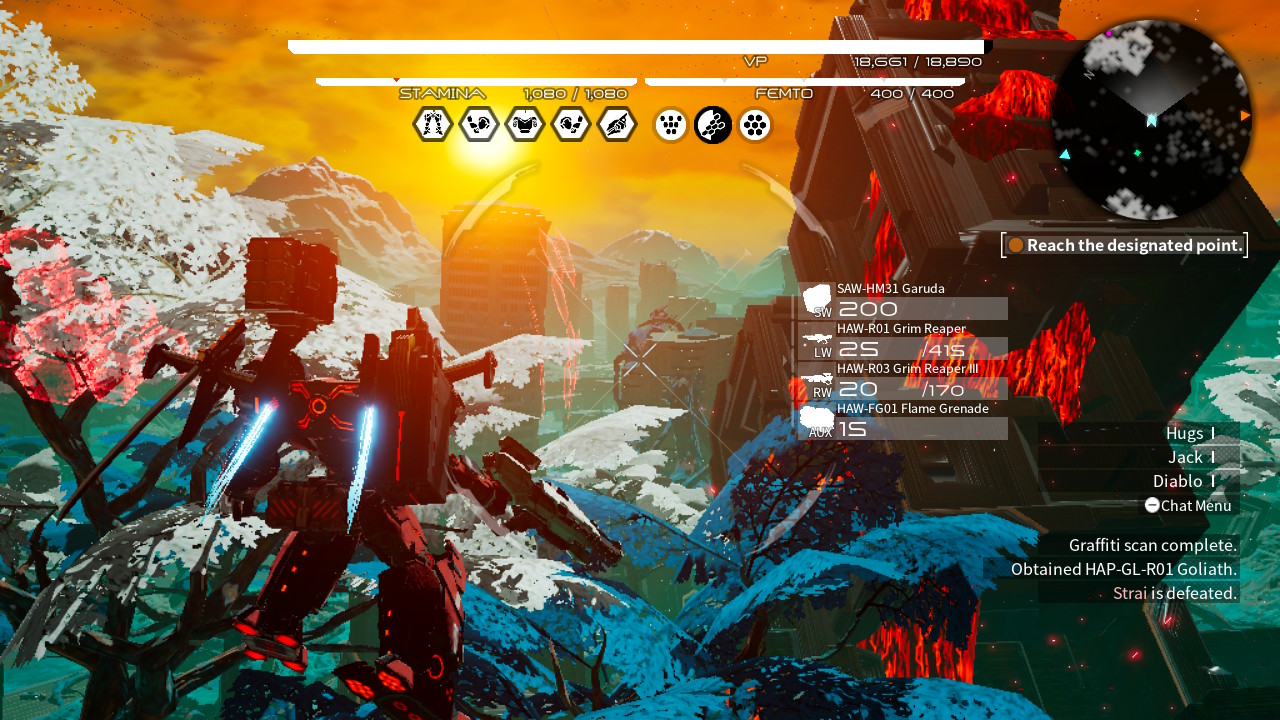 If it wasn’t the visuals or the over-the-top characters that let you know you’re playing an anime game, the soundtrack certainly would have given it away. Daemon X Machina has a fantastic hyper-metal rock soundtrack filled with shredding guitars and heavy riffs that make the gameplay action feel that much more exciting and intense. I probably won’t be listening to the soundtrack outside of the game, but it punctuates the tone and style of the gameplay perfectly. 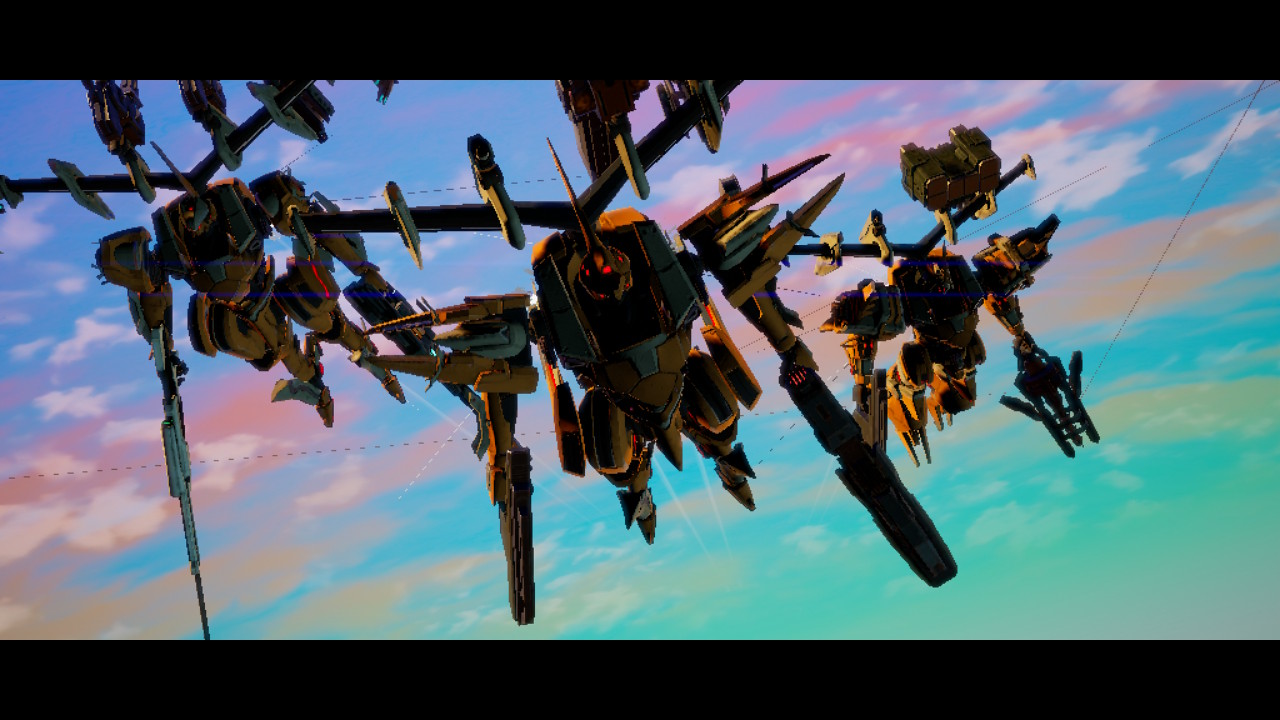 Everything about Daemon X Machina works to make you feel like a central character in your own mecha anime. The visuals and the soundtrack immediately immerse you into the world, while the frantic gameplay and mechanics make you feel like a genuine mech pilot. The story is absurdly serious and undeniably cheesy, which is likely to polarise players – as will the intensely crowded HUD and somewhat unwieldy control scheme. Some players will take one look at the screenshots and begin to tremble at the thought of keeping track of all those stats and meters, while others will relish the experience of customising and piloting their own mech. Either way, Daemon X Machina is worth checking out and with a free demo available on the eShop, you’ve got nothing to lose. 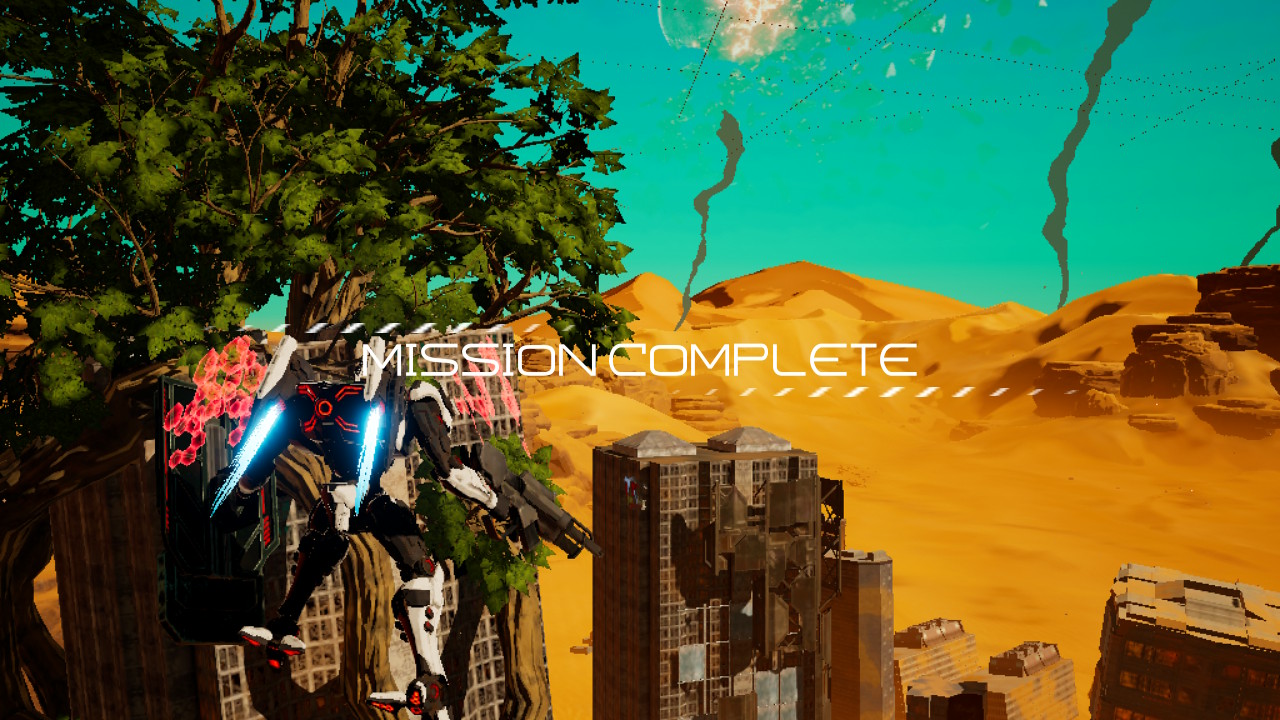 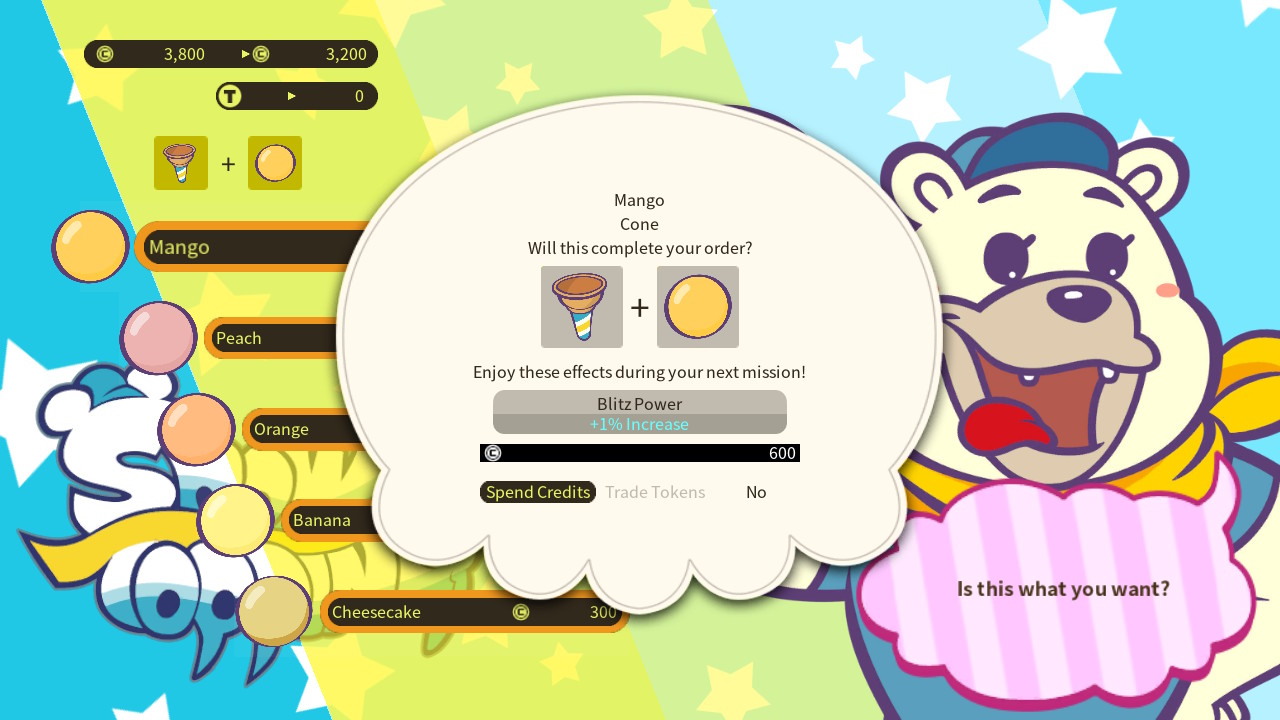