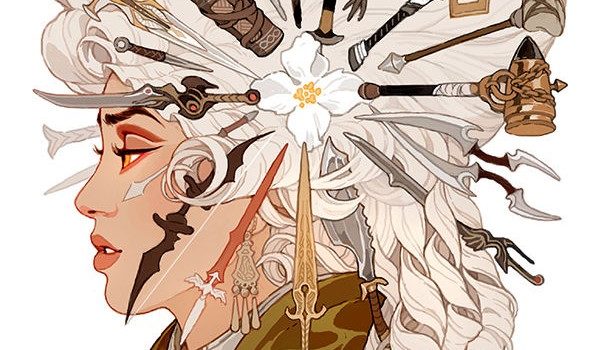 Summary: Dragon Age Deception feels like the start of a buddy comedy in the Dragon Age universe.

As a huge fan of the Dragon Age video game series by Bioware, I was excited to delve into Dragon Age: Deception. Written by Nunzio DeFilippis and Christina Weir, with art by Fernando Heinz Furukawa and published by Dark Horse comics, this is a tale set in the Dragon Age universe. Olivia Pryde is a con artist, currently operating in the Tevinter city of Ventus.

People are in the midst of evacuating the city as a Qunari attack is imminent. She poses as a magister, intending to use her guise—as well as the sense of urgency that comes from people fleeing the city—to approach Calix Qintara, son of a magister who is a rumored practitioner of dark magic. She plans to leverage her position into a bribe, but quickly discovers that Calix Qintara is not what he seems.

He is not the magister’s son, or even really a Qintara. He is just another con artist taking advantage of a convenient identity, to do… stuff. 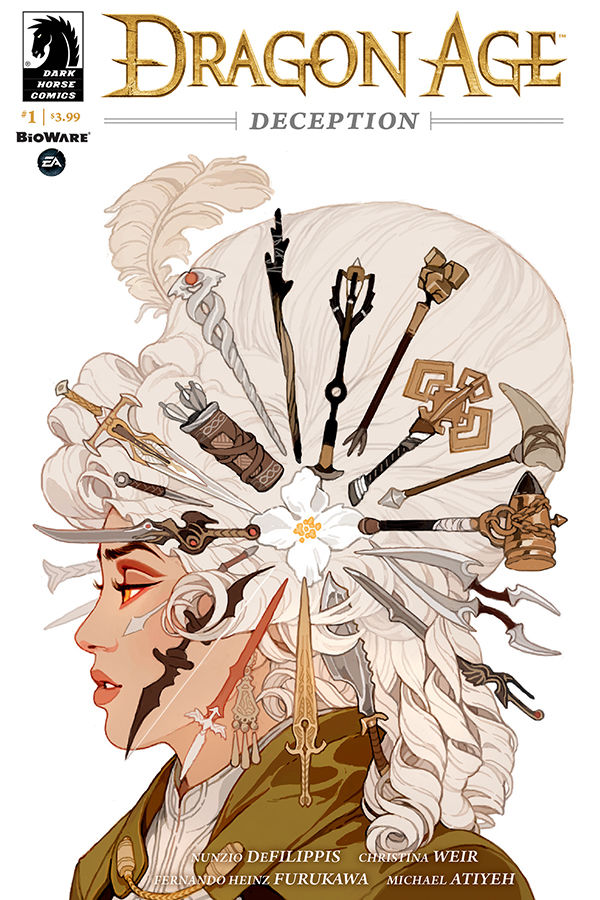 That’s the main problem with Dragon Age: Deception. I felt that neither Olivia nor Calix had very clear goals or motivations. I knew that Olivia was there to con a nobleman’s son and to try and leverage her power into a bribe, but why? She’s taking a huge risk and I never really felt as though there was a solid reason for her actions. Does she need the money? Is impersonating a magister in a city on the brink of war her idea of fun? Hopefully future issues will shed some light on this, but for now what she’s doing just feels like a bad idea.

It doesn’t take long for Olivia to figure out that Calix isn’t a true Qintara, and that he’s a grifter working his own angle. It’s never really made clear what he hopes to accomplish either. We know that he’s an amateur from his back and forth with Olivia, but we don’t know what he’s after, except maybe to score some quick coin. He also seems to be in search of a mentor, as through the issue he constantly pesters Olivia about working together. 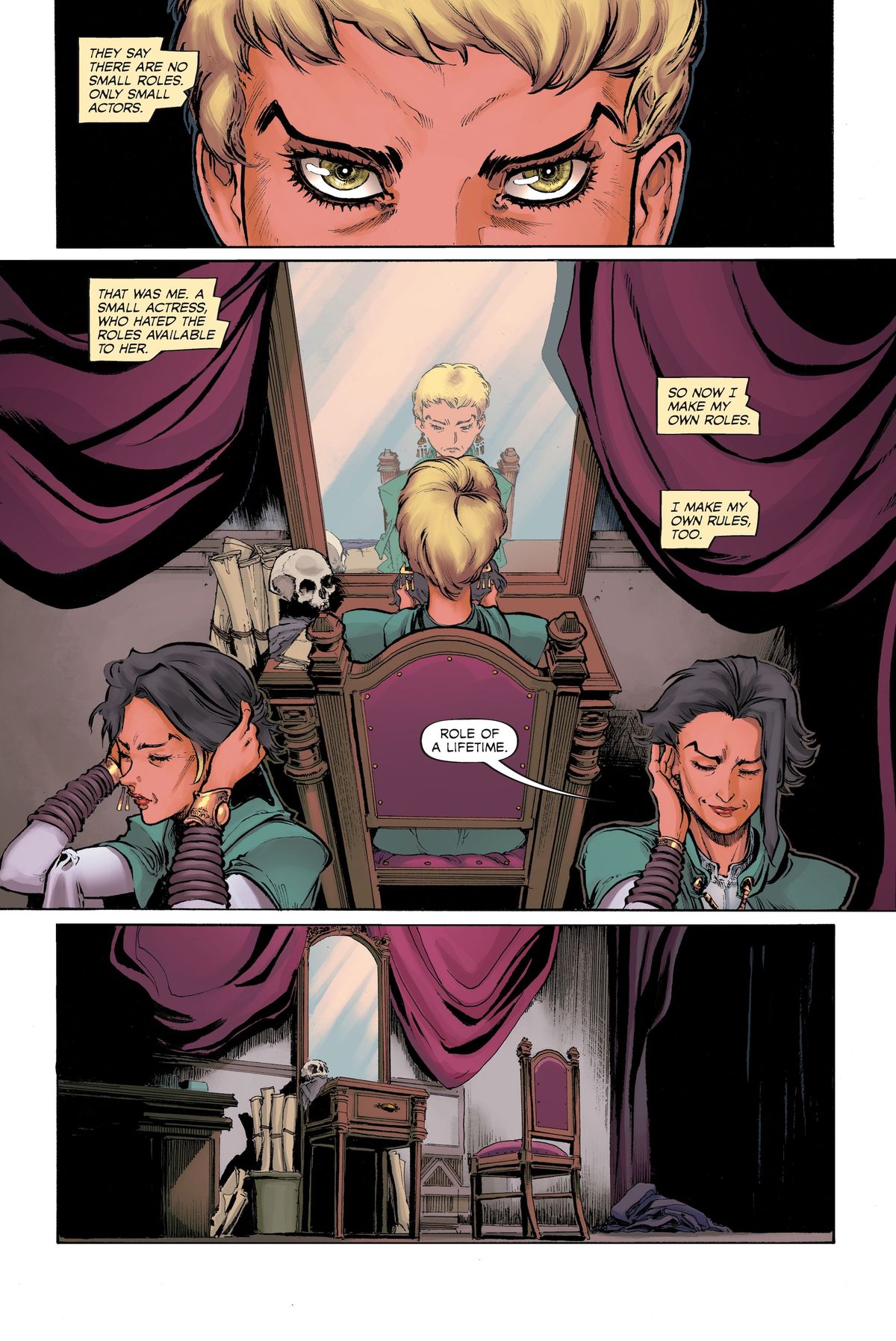 He comes across as desperate. Olivia makes it clear that she wants nothing to do with him, yet after several back and forth attempts to thwart each other, he’s back on her heels trying to get her to take him under her wing. There are also one or two moments that seem like attempts to build chemistry with one another. During their first meeting and Calix asks why she’s here, she says “I came here to do you,” resulting in awkward looks from them both, before she corrects herself by saying “Er…persuade you”. This might have worked if they had chemistry together, but Calix is annoying and full of himself, and Olivia comes off as unapproachable and cold.

The story does its best to name drop and remind you that you’re in the Dragon Age setting. Some of these felt out of place and artificially inserted, but I did really enjoy Dorian’s cameo appearance. 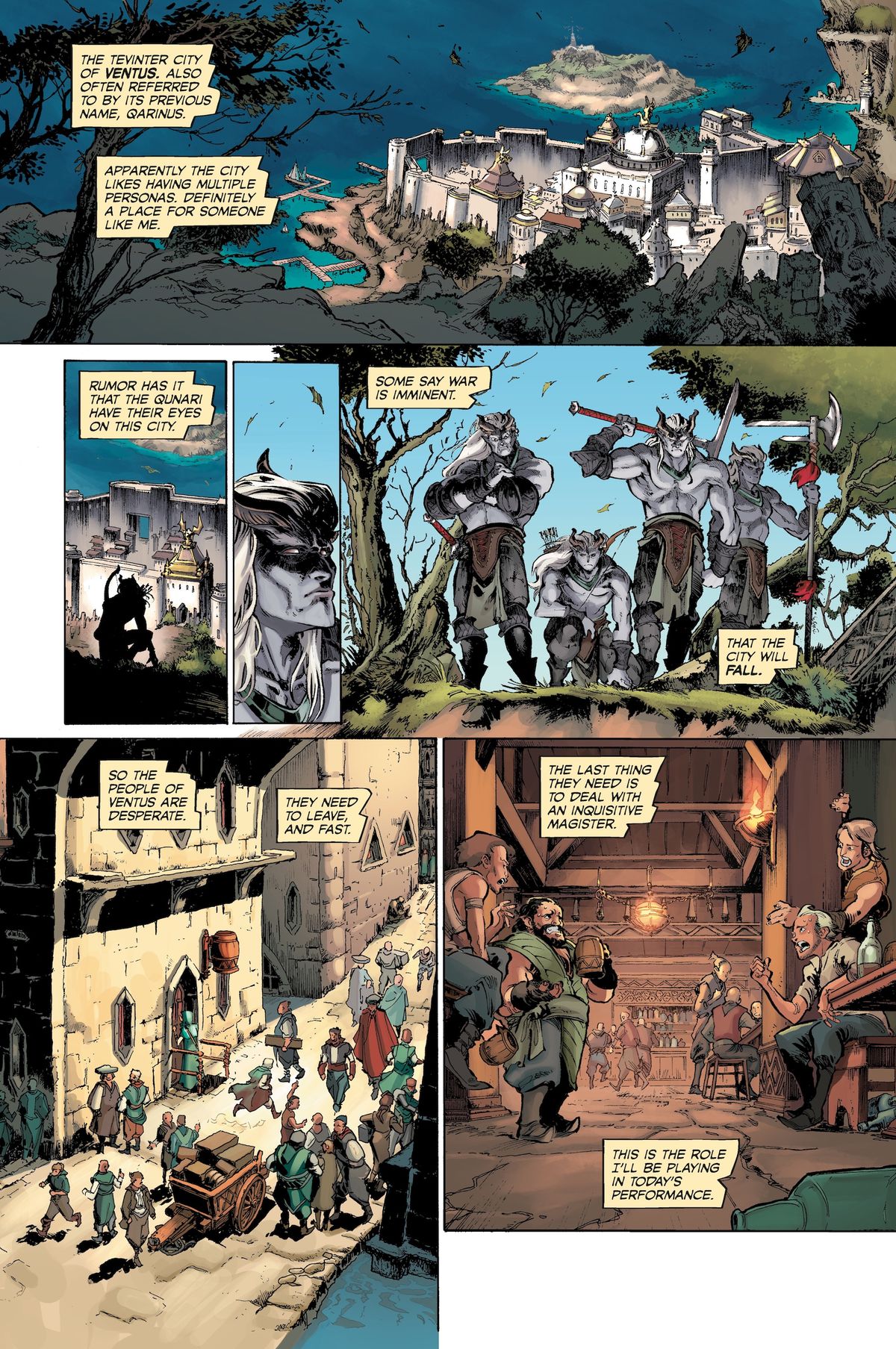 The art is where this book really shines. From the dark countenance of the Qunari standing on a ridge overlooking the city, to the people running about the streets of Ventus with cargo laden wagons, there is a sense of urgency. This is a city on the verge of an attack, and the art really supports this idea.

I enjoyed Dorian’s shift from “amicable” to “not to be trifled with”. The artist does an excellent job of detailing character expressions and more subtle nuances, such as Olivia’s baleful sidelong look when she realizes that her magister prop staff is not as good as she thought it was. This quickly changes to cocky self confidence when her mabari friend steps in. 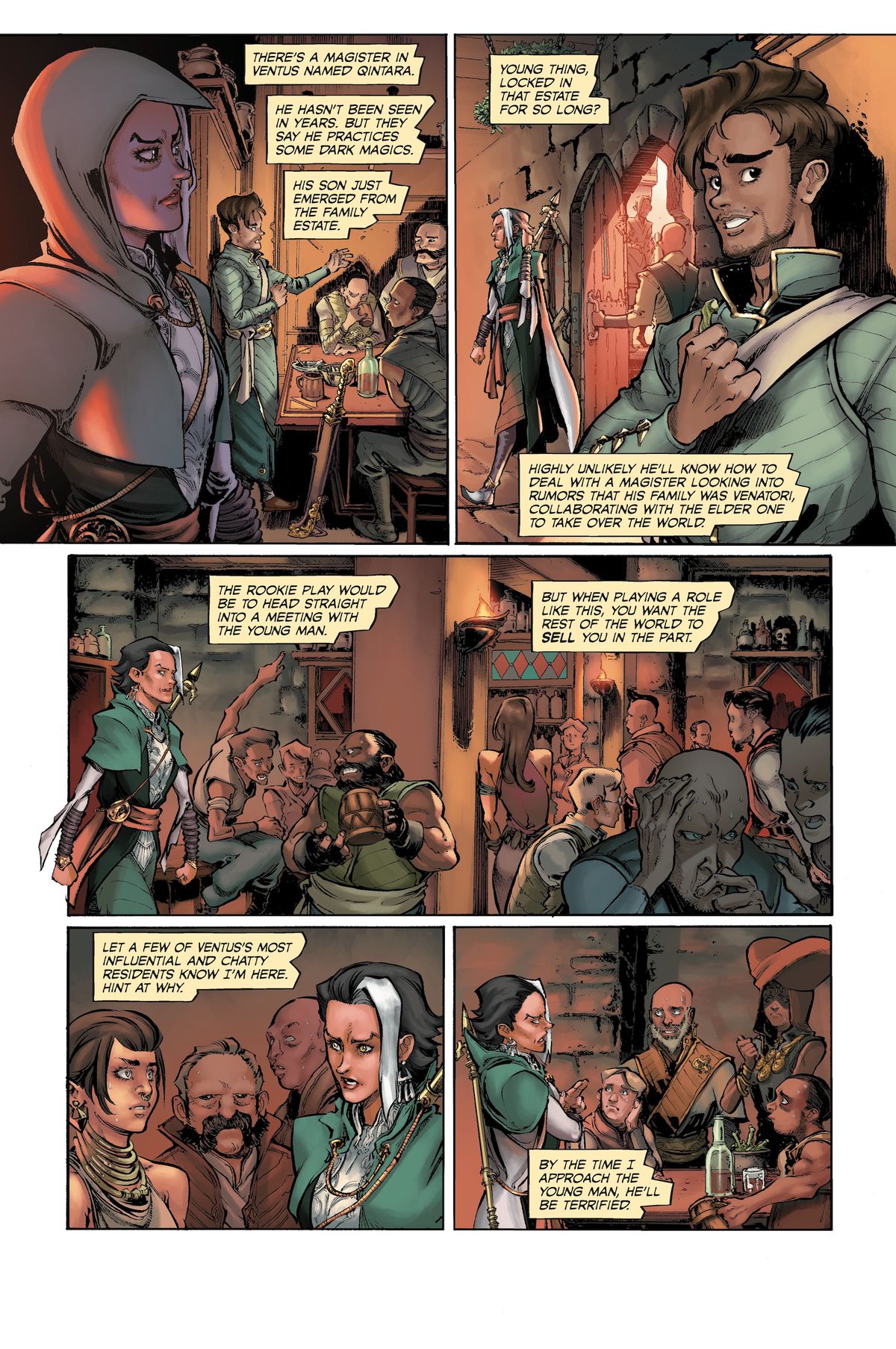 Dragon Age Deception feels like the start of a buddy comedy in the Dragon Age universe. It wants very much for you to know that it’s a part of that setting, but I feel like it could have conveyed that message without trying so hard. I never felt sympathy for either Calix or Olivia, and that’s problematic when you like neither of the story’s main protagonists. I hope that the next issue fleshes them both out a great deal more, and adds some sort of background for their motivations.