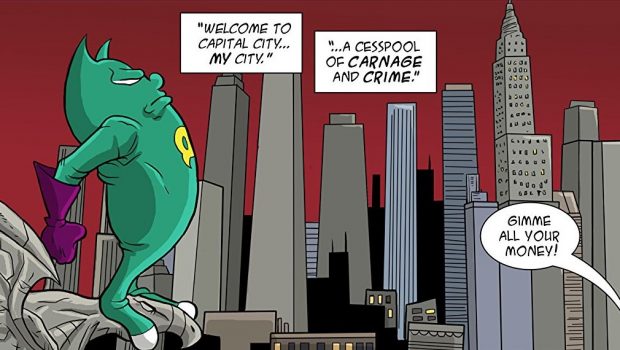 D.C Johnson, the mastermind behind the hilarious reinvention of the Golden Age hero, Mighty Mite, recently had a chat with Impulse Gamer, where we talk about the lure of the Mighty Mite, the similarities his character has to the original, his creative process and much more!

So, you’ve put your own spin on a old Golden Age character. What was it about the Mighty Mite that appealed to you?

Well, funny story: I created a super hero character named Bunny Boy, in my previous series The World Hates Jimmy; but my (ex)publisher tried to retain the rights to my work after I left them. So, to avoid a drawn-out legal battle, I finally decided it would just be easier to create a new character instead. I wanted something that rolls off the tongue easily like “Bunny Boy”, and eventually I thought of “Mighty Mite”. I googled the name to see if it had been used before, and low and behold, I learned that not only had it been used before, but he already had a comic! (D’oh!) But the original interested me. I thought he was a cool character, and I was taken aback by how unintentionally similar my creation was to the original in concept, so I kept digging for more info.

Eventually I learned that the Captain Aero Mighty Mite character had reverted to the public domain after Holyoke Publishing went under, and that actually worked for me, since I was still a bit bitter over the rights dispute on my previous character. Copyrights are a funny thing, in that while you can’t copyright something in the public domain, you can copyright your version of it. For instance, Tim Burton’s Alice in Wonderland is totally different from the horror video game Alice, and both are protected. So, I liked the idea of creating something that neither I nor a publisher would completely own 100%. But aside from all that, what really appealed to me was the idea of a good person that gets little to no respect. Truth be told it’s the story of my life. The original smacked of the vibe that, this is someone who’s looked down on and condescended to. And yeah, that worked for me. 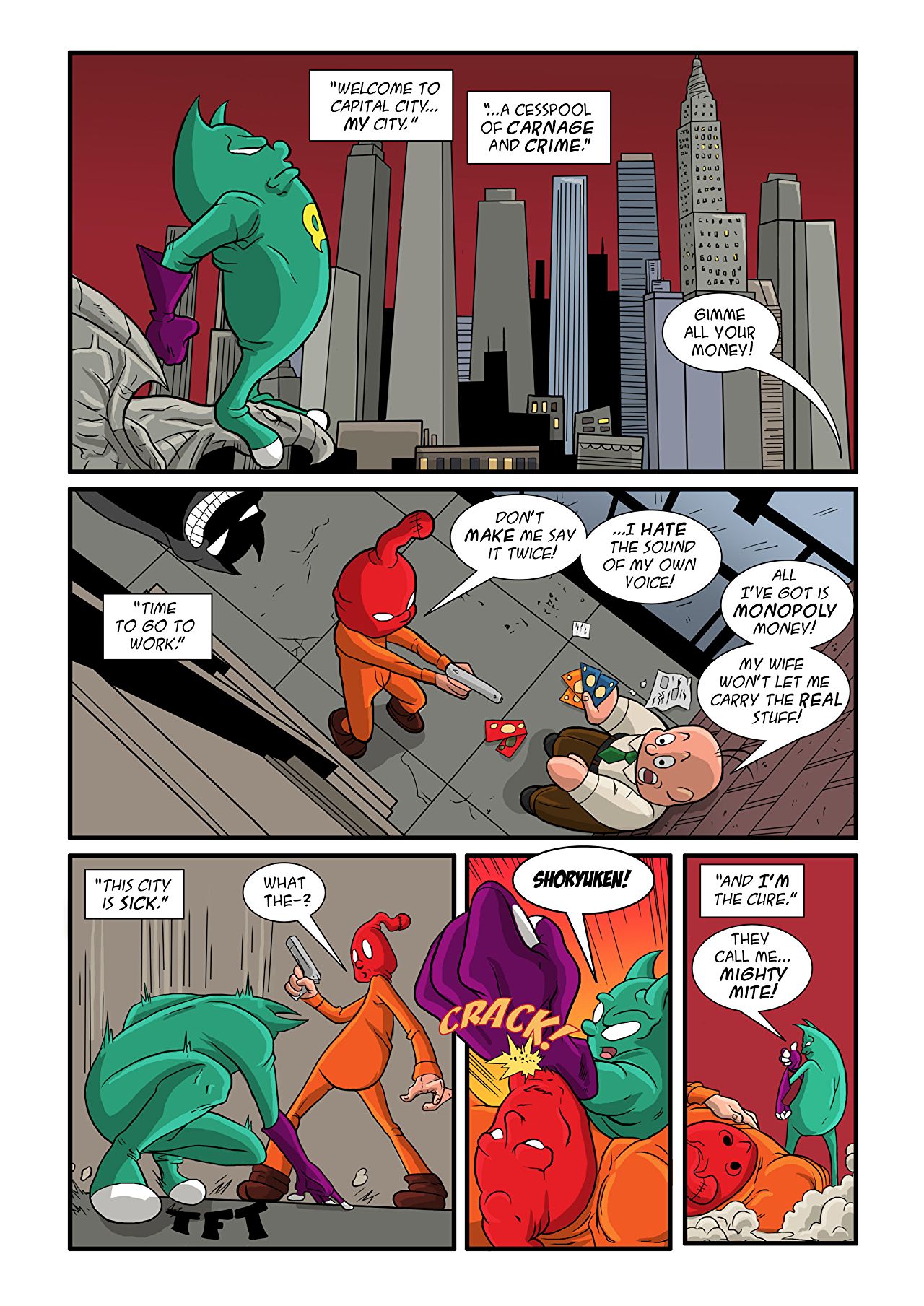 How much is your character similar and different to the original?

Well again, the concept is the same. Both are underdogs, and neither really have any powers. The original kind of, hints at things that I make more apparent in mine. For instance, “determination” is a running theme through both. The old school Mighty Mite basically goes from a kid playing dress up to a legitimate hero down the road. The idea behind this is that he worked at it, and through sheer willpower, eventually reached his goal. My Mighty Mite is already an established hero, but he’s treated like a joke by the other heroes. Of course, he refuses to let that stop him. As far as differences go, my version is pretty much amped up to 60. He’s exaggerated and bombastic, with zero subtlety, and total awareness of what others think of him. And unlike the original, my Mighty Mite can fight! He’s an actual threat to anyone that chooses to take him on. 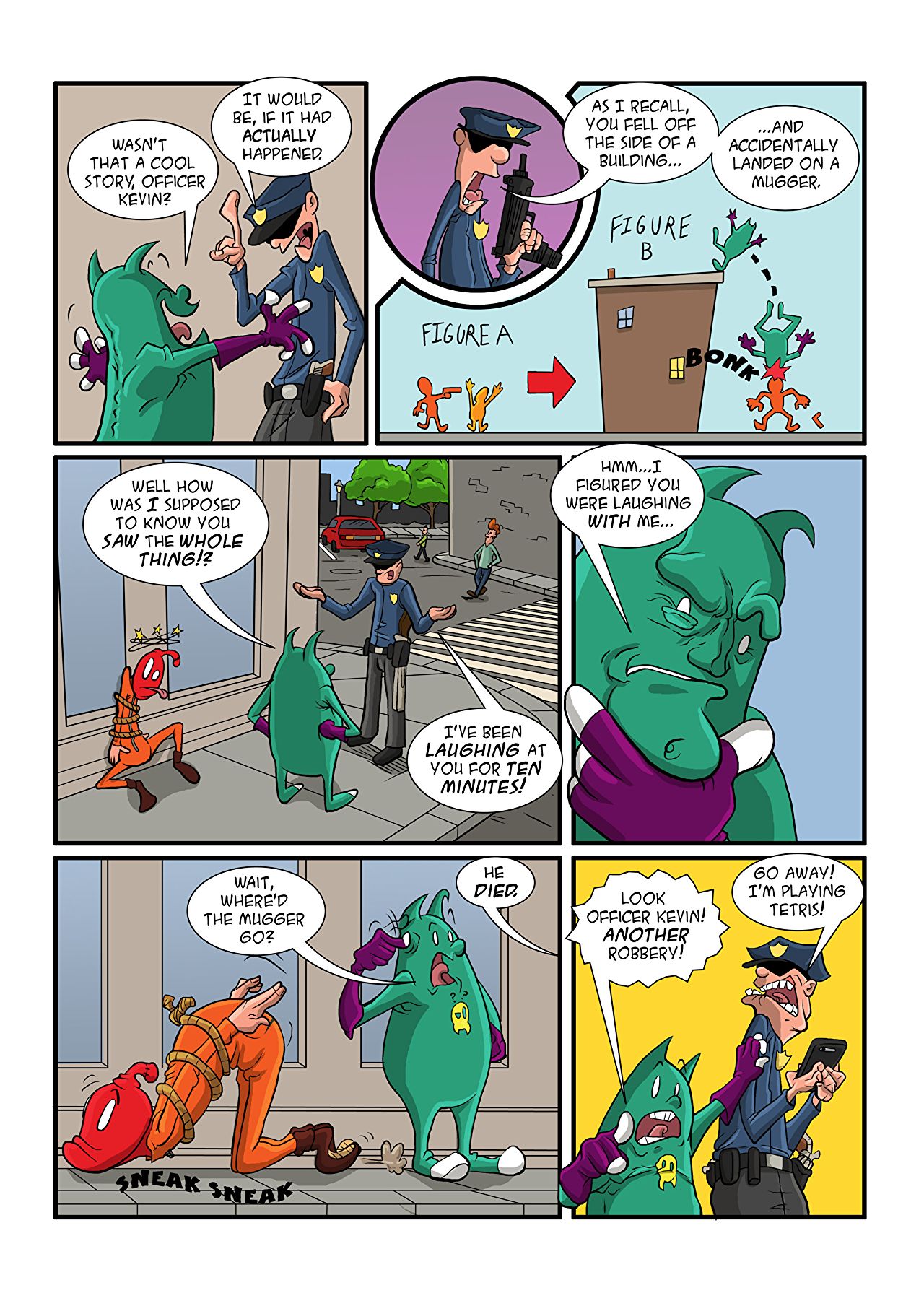 Can you introduce us to the key players and tell us what people can expect from the story?

So, there’s Mighty Mite, and then this other guy “Dr. Dread” (who’s a public domain character too), that considers himself Mighty Mite’s sworn enemy. The Doc though, is more like, codependent than a real antagonist. He needs to fight Mighty Mite, because he needs the attention. He’s a bit obsessed like Joker is for Batman, and to that end, Mighty Mite can actually convince Dread to occasionally help him combat bigger threats. Then there’s a villain calling himself “The Crooked Man”, who ends up becoming more of a problem as the series goes on. I’d say Crooked Man is Mighty Mite’s real arch nemesis. He’s nuts, and a bit creepy! This first arc deals with Terrible Tina, an alien villain that shows up on Earth for no reason other than to cause trouble. I won’t reveal much on her, but it’s worth noting that in the original Mighty Mite book, he has a girlfriend named Tina. Next there’s Antic, who’s a clown motif character. I definitely drew from a little Harley Quinn for her, in that she’s a reformed villain who becomes obsessed with Mighty Mite. But Antic is more vulnerable than Harley, and she complements Mighty Mite because she too, just wants to be accepted. Mighty Mite is the only hero that treats her like she matters. Lastly there’s Gossip Girl, who’s just, very fun to write. She dislikes Mighty Mite and really enjoys mischief. But beneath all that, she has a decent heart. All the other heroes are mostly worthless. They spend their time at a juice bar instead of helping out. And expect hard hitting action, and zany comedy­– kind of like Deadpool in that sense. I’m a huge Dragon Ball Z fan, and I cut my comic teeth drawing a shonen manga for my first publisher, so I can promise you cool fight choreography. 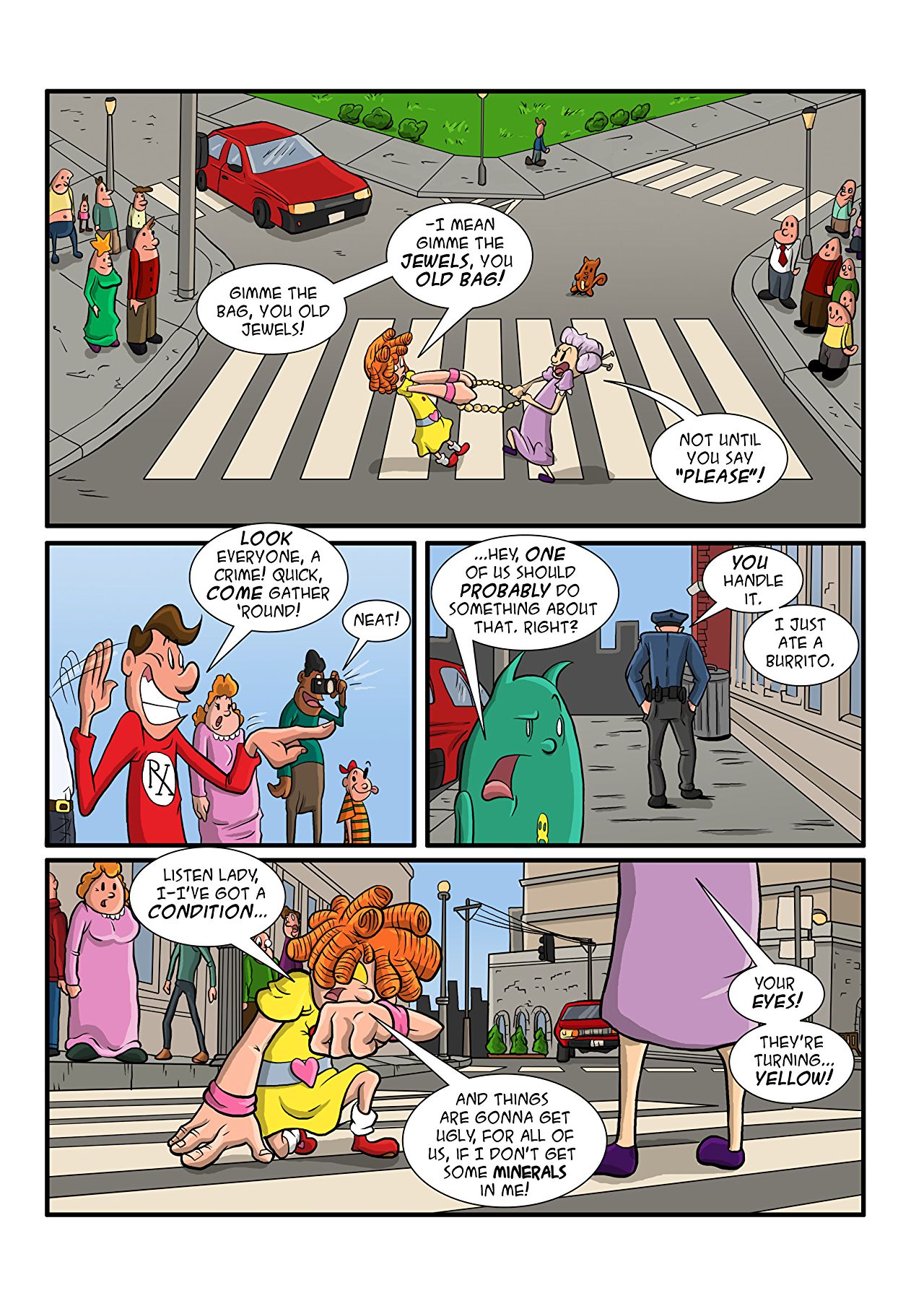 You both write and illustrate this comic. Can you tell us a bit about your creative process when tackling both these elements?

I have terrible ADHD, so my process is undisciplined and a lousy example to other creators. But I think up a general idea and mull it over in my mind endlessly, even while working on a different part of the book. As the idea forms, I jot down cool things that come to me, in the note pad app of my phone. I think of how I should stage key panels while watching cartoons and playing video games. When I see a cool shot, in a movie or whatever, I think to myself “The Director framed that up nicely.” and I mentally save it, and I know it sounds crazy, but it unconsciously comes out in my art. It all looks suspiciously like procrastinating (and it probably is), but there’s a method to the madness. Anyway, at this point I’ve accumulated all these bits and snatches of information and half formed ideas. But I don’t have the attention span to percolate this stuff forever, so I jump right in and start drawing (I hate digital drawing, so I only use traditional pencil and paper).

Sometimes I’ll end up throwing away ideas I’ve spent weeks crafting, and other times the art comes out almost exactly how I envisioned it in my head. Keep in mind though, there’s no solidified dialogue yet, and most of the panels have no planned layout to follow. But it all comes to me as I draw it.

I’ve been drawing seriously since I was 14, I’ve read more art books than I can count and studied graphic design in college; so, the fundamentals have a way of creeping in without me going out of my way to include them. Anyway, after that I look over everything I’ve done, and if something needs changing, I’ll draw it up on separate paper and superimpose it on to the page once it’s scanned in. Then I lay all my pages out across my floor, and write finalized dialogue while going through each panel, one at a time. It all gets typed into a script, and the now scanned art and script are sent off to my assistant. While he works on that, I move on to drawing the next issue. 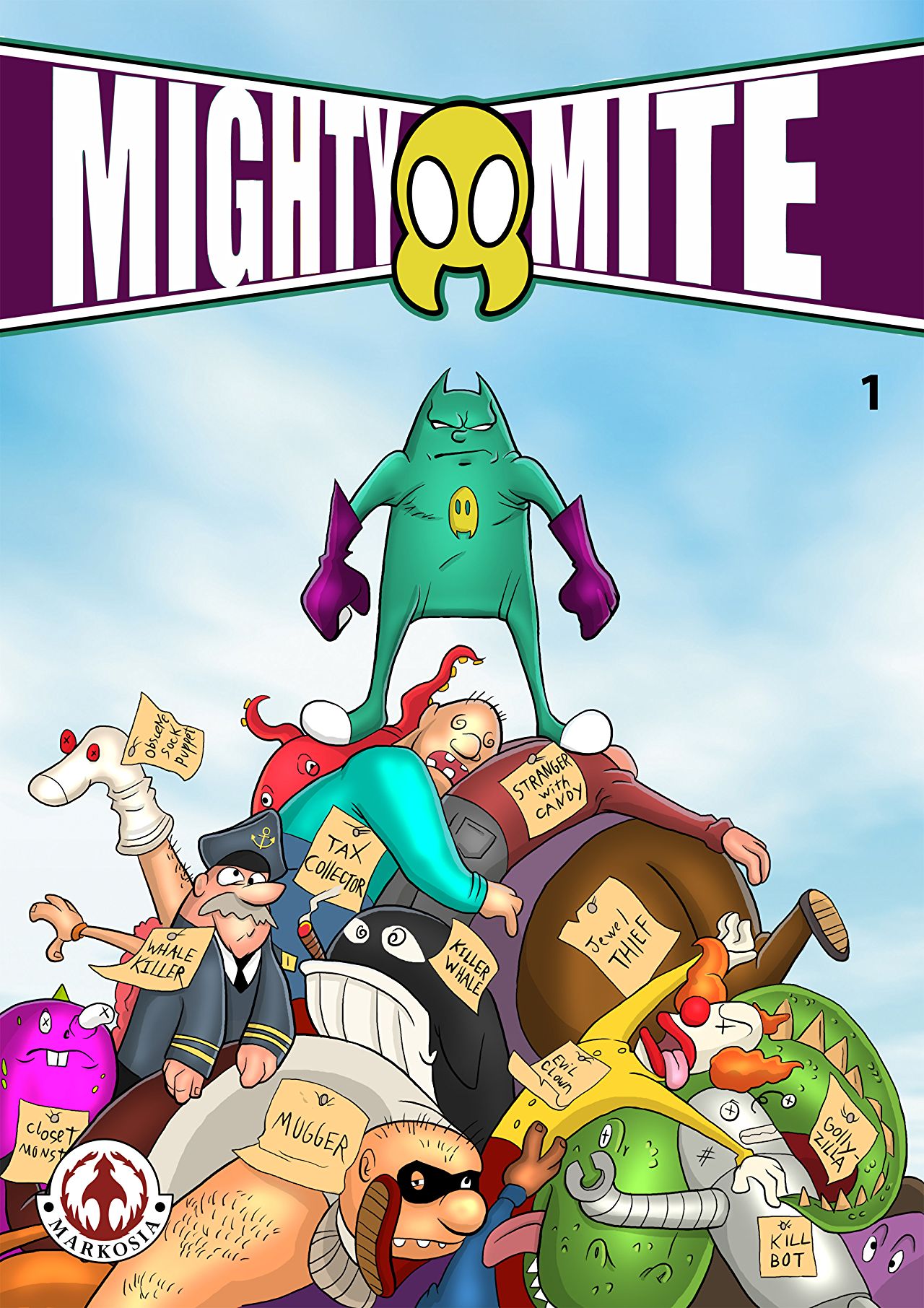 Is this your first foray into comics?

Nope. As I said, I drew a book called The World Hates Jimmy for a different publisher, prior to this. I don’t think Jimmy is currently available though, but my new publisher Markosia, said they’d reprint it now that the previous publisher is defunct. And before that, I drew the aforementioned shonen manga, which was called Rx. That one may or may not still be on ComiXology (I’m too lazy to check). Every now and then I’ll get a royalty payment from it, but again it might be delisted at this point.

Finally, where can people purchase Mighty Mite from?

Mighty Mite can be purchased on ComiXology by clicking here!