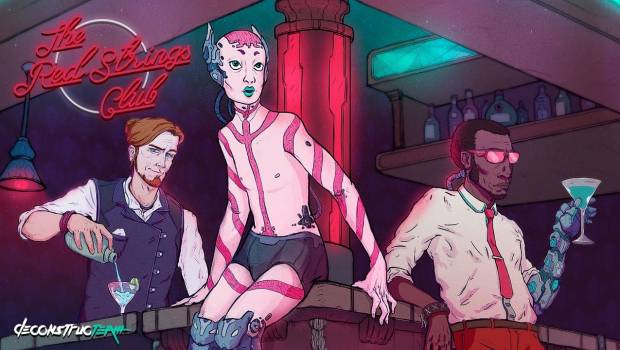 VALENCIA – Independent developer Deconstructeam and amateur bartenders Devolver Digital announced that point and click thriller The Red Strings Club will launch January 22. Eager cyberpunk fans can preorder now on Steam to receive 20% off and a free copy of Deconstructeam’s debut game Gods Will Be Watching for free or as a giftable copy if they already own it.

The Red Strings Club is a cyberpunk narrative experience about fate and happiness featuring the extensive use of pottery, bartending and impersonating people on the phone to take down a corporate conspiracy. The professed altruistic corporation Supercontinent Ltd is on the verge of releasing Social Psyche Welfare: a system that will eliminate depression, anger and fear from society. However, the bartender of a clandestine club and a freelance hacker don’t regard this evolution as an improvement but as brainwashing. Alongside unwitting company employees and a rogue empathy android, the duo will pull all the strings they can to bring down this scheme.

Deconstructeam first splashed on the indie game scene with 2014’s Gods Will Be Watching, a game jam project turned debut release with partner Devolver Digital. The team’s first effort went on to gain critical acclaim for its bold narrative and unorthodox approach to the point and click adventure genre. The team has continued their work with notable entries in the world’s largest game jam competitions with a few of these experiments coming together to assemble The Red Strings Club.