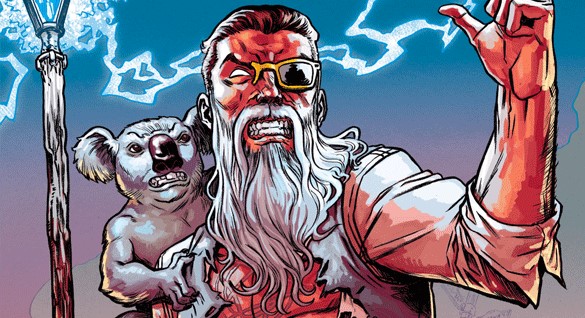 Curse Words brings gonzo magic to New York. Over the last decade and a half magic has transmogrified from a childish element of popular culture that was the realm of children’s and YA literature, to top billing in theatres and bookshops. Magic is everywhere. Doctor Strange commands hundreds of millions in box office receipts. The filmic adaptations of Tolkein are some of the most lucrative properties in human history. Magic has shed its childish reputation to be considered acceptable again. But magic never really faded from popularity in comics. Marvel and DC have both celebrated a healthy dose of the magical and mysterious since the golden age of comics. The 60s and 70s Stan Lee, Jack Kirby, and Steve Ditko Thor and Doctor Strange runs really conjured magic into the world of comics. If you yearn for manic magical escapades or have fond memories of these comics, then Curse Words might just be the enchantment you’re after! 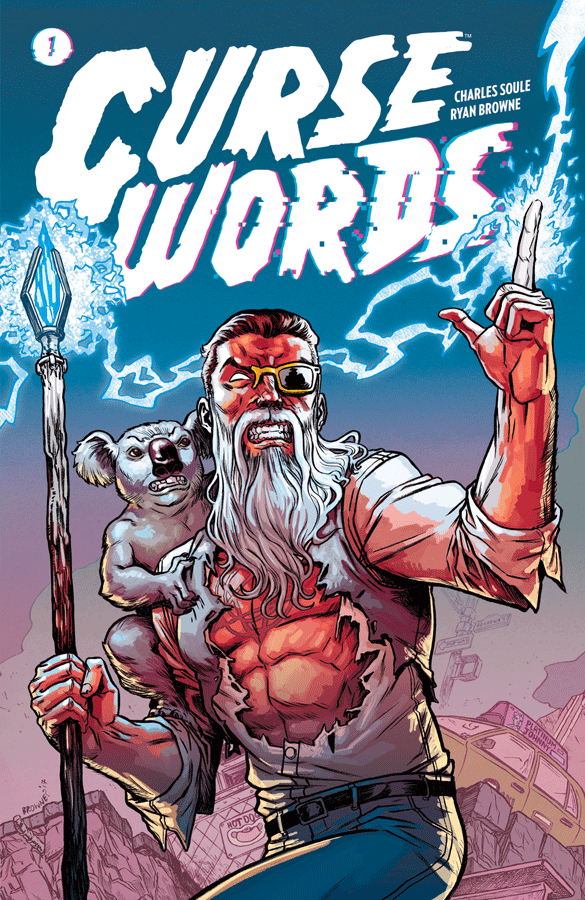 Beginning in media res, Curse Words tells Wizord’s story. Wizord is definitely an anti-hero. Wizord is an evil magician who has escaped from Hole World, and his tyrant boss Sizajee, and decided to make a life for himself in the Big Apple as a Wizard for hire. Previously he was an enforcer. Now he struggles with the idea of doing good, and doesn’t quite get the notion of consequences. Wizord is accompanied by Margaret (#teammargaret), his familiar who begins the series as a rat before settling in as a cuddly marsupial. Margaret the Koala serves as Wizord’s conscience and logic. You see, Wizord isn’t the brightest of sparks, he’s at least a point short of a pentacle. He is far better at making things worse before he makes them better. He generally approaches all problems as if they require heavy duty solutions. The result is chaotic fun, hilarious carnage, and collateral damage. Curse Words takes the psychedelic tradition of Lee, Kirby, and Ditko and Gonzo’s and boils it up with a healthy dose of Garth Ennis’ irreverence and humour. 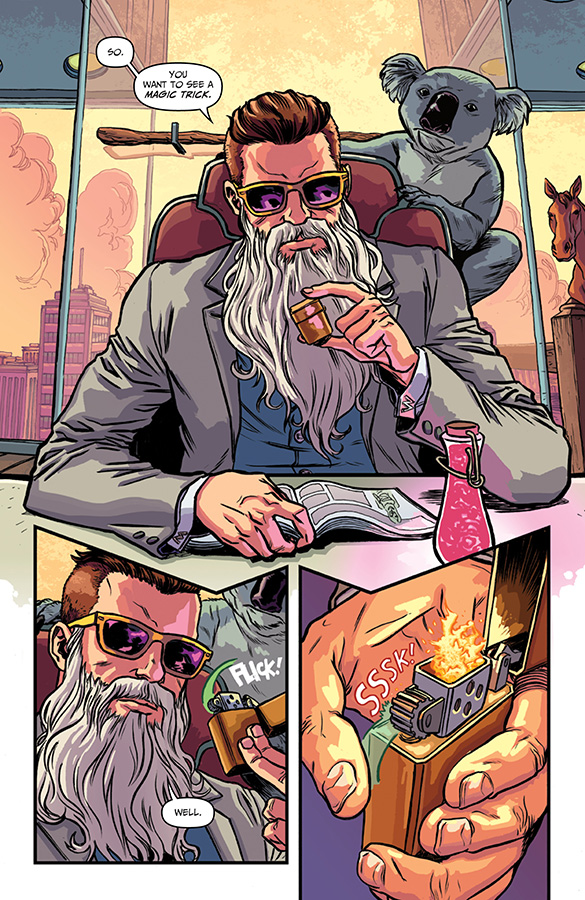 Curse Words is beautiful psychedelic madness! Every panel is gorgeous! The illustrations are clear and crisp all brought to life with some of the most vivacious colouring you could hope for! Curse Words is bright. Curse Words is beautiful. Curse Words is one of those comics where you look at a panel and say “Holy Sh*tballs, that’s pretty!” In that sense, it lives up to its name. The layout is easy to follow, without being totally conventional. Wizord’s carnage and spells charge across double pages and Sizajee’s plots weave amongst the panels. There is a good balance between the darkness of the narrative and the psychedelic beauty of the illustration. Ryan Browne has put together a stunning piece of work in these first five issues!

It’s hard to balance the requirements of the first issues of a new property with the needs of good narrative and dialogue. Charles Soule does a fairly good job of it. Some of the dialogue in the early issues is exposition heavy and the gags don’t quite hit their marks. But by the end of the end of issue five it’s laugh out loud funny! Soule and Browne do an excellent job of worldbuilding, it just feels a bit clunky in the first couple of issues. One of the other difficulties with a new property is character development. Curse Words has a sizeable menagerie of characters and villains. In places, it feels as if Sizajee and his sizeable horde are introduced at the expense of characterisation. Cornwall, for example, seems wholly underutilised and developed given how fun he seems as a villain. Once things get rolling, Sizajee, Ruby, Margaret, Jacques Zacqub, and Wizord start to come to life. It just takes a little patience to get there. 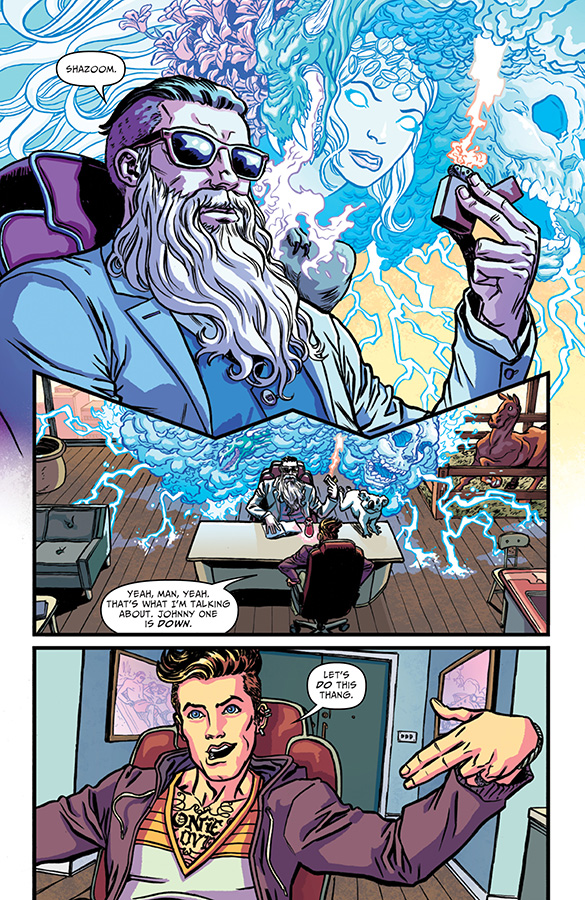 While Curse Words 1-5 is good fun and promising. Some of it is a little bit derivative. There are some unmistakable plot parallels to Saga that seem to emerge. And the characterisation of Wizord is a little stock. The bumbling-guy-who-cocks-up-everything-while-trying-to-do-good-after-a-lifetime-of-bad gets a lot of run nowadays. Soule and Browne do a good job of it, but it would be nice to see the character develop away from that. Ruby is an interesting character, she has a lot of promise. She’s the bad ass former lover of Wizord. Together they ran the show in Hole World for Sizajee: he the magical enforcer, her the hardcore warrior woman. However, so far, she is the angry-jilted-lover that’s reminiscent of Preacher’s Tulip or Saga’s Gwendolyn. Characters have to start somewhere, though, so here’s hoping Soule and Browne take them both somewhere interesting and novel. 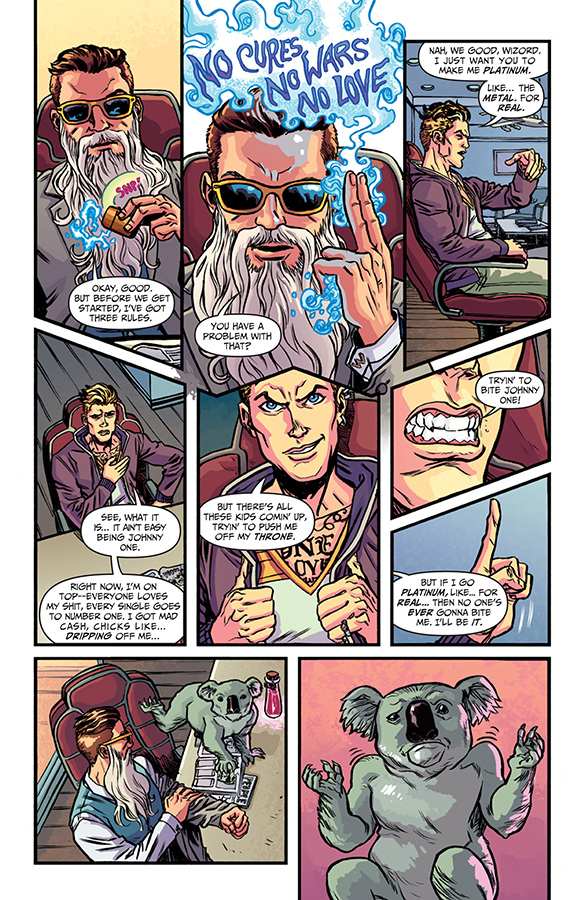 Curse Words is shaping up to be a psychedelic tour de force. It overcomes some hiccups in the first couple of issues to be a fun and occasionally hilarious story. While aspects of the story are a little time worn, Browne’s illustrations are worth the price alone. Curse Words is beautifully drawn and coloured and I promise that you will be gawping at panel after stunning panel.

Summary: A visually stunning and outrageous story is a little hexed by derivative characters and heavy exposition.