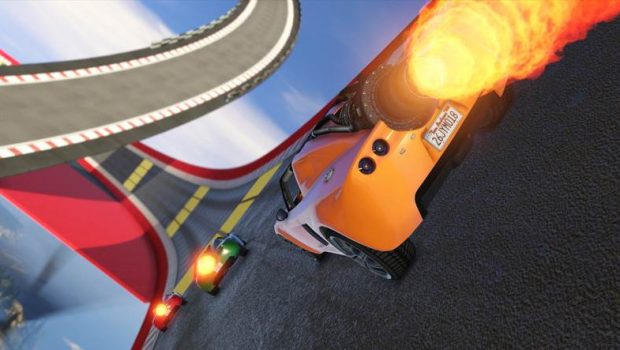 As seen in today’s new trailer, Special Vehicles and Stunt Races are a match made in heaven. Bunny hop an opponent, rocket through Stunt Tubes and live the life aquatic as the Ruiner 2000, Rocket Voltic and Blazer Aqua each receive their own set of Stunt Races tailored to each vehicle’s unique features and capabilities. Find the Special Vehicle Circuit Series icon on the map to jump directly into the action, or bookmark these Special Vehicle Races on Social Club to play now, using the links below:

As an added bonus, get acquainted with the new Special Vehicle Races this week and earn Double GTA$ & RP on all 20 hair-raising tracks through Wednesday, March 22nd.

You’ve had flings with curvy concept cars, ditsy prototype roadsters and heavily-modded trackday racers. And somehow, you’re still not satisfied. Face it, you’re ready to settle down, and there’s only one choice: the Progen GP1. Now available in GTA Online from Legendary Motorsport.

Your vehicular arsenal just isn’t complete without a HVY Insurgent, but breaking into the Humane Labs isn’t always as easy as it looks. The good news is you now have buy-it-now instant access to any vehicle that had to be acquired on a Heist. And because you can never have too much of a good thing, the Rhino, Annihilator, Buzzard and the Dubsta 6×6 no longer have rank requirements before purchase either.

Starting today and available through March 22nd, you can take advantage of 25% off the following essentials:

This week also marks the debut of a Special Vehicle Premium Race, with Redneck featuring the Rocket Voltic getting the Premium treatment. Dishing out huge GTA$ winnings for the top three finishers and Triple RP for all, launch this week’s Premium Race from the Quick Job App on your in-game phone or via the yellow corona at Legion Square.

Look for even more updates coming to GTA Online in the weeks ahead, including additions to the Creator like new Stunt Race props and the ability to concoct your own Special Vehicle Races for the Rocket Voltic, Ruiner 2000, and Blazer Aqua. Plus crazy new modes like Resurrection and Top Down, as well as a collection of oft-requested classic GTA rides – including one particularly morbid muscle car.